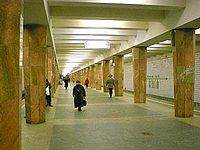 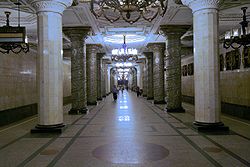 The shallow column station is a type of construction of subway stations, with the distinguishing feature being an abundance of supplementary supports for the underground cavity. Most designs employ metal columns or concrete and steel columns arranged in lines parallel to the long axis of the station.

Stations can be double-span with a single row of columns, triple-span with two rows of columns, or multi-span. The typical shallow column station in Russia is triple-span, assembled from concrete and steel, and is from 102 to 164 metres in length with a column spacing of 4-6 m. Along with the typical stations, there are also specially built stations. For example, one of the spans may be replaced with a monolithic vault (as in the Moskovskaya station of the Samara
Samara, Russia
Samara , is the sixth largest city in Russia. It is situated in the southeastern part of European Russia at the confluence of the Volga and Samara Rivers. Samara is the administrative center of Samara Oblast. Population: . The metropolitan area of Samara-Tolyatti-Syzran within Samara Oblast...
Metro or Sibirskaya in Novosibirsk
Novosibirsk
Novosibirsk is the third-largest city in Russia, after Moscow and Saint Petersburg, and the largest city of Siberia, with a population of 1,473,737 . It is the administrative center of Novosibirsk Oblast as well as of the Siberian Federal District...
). In some cases, one of the rows of columns may be replaced with a load-bearing wall. Such a dual hall, one-span station, Kashirskaya, was constructed to provide a convenient cross-platform transfer. Recently, stations have appeared with monolithic concrete and steel instead of assembled pieces, as Ploshchad Tukaya in Kazan
Kazan
Kazan is the capital and largest city of the Republic of Tatarstan, Russia. With a population of 1,143,546 , it is the eighth most populous city in Russia. Kazan lies at the confluence of the Volga and Kazanka Rivers in European Russia. In April 2009, the Russian Patent Office granted Kazan the...
.

The typical shallow column station has two vestibules at both ends of the station, most often combined with below-street crossings.

For many metro systems outside Russia, the typical column station is a two-span station with metal columns, as in New York
New York
New York is a state in the Northeastern region of the United States. It is the nation's third most populous state. New York is bordered by New Jersey and Pennsylvania to the south, and by Connecticut, Massachusetts and Vermont to the east...
, Berlin
Berlin
Berlin is the capital city of Germany and is one of the 16 states of Germany. With a population of 3.45 million people, Berlin is Germany's largest city. It is the second most populous city proper and the seventh most populous urban area in the European Union...
, and others. In Chicago
Chicago
Chicago is the largest city in the US state of Illinois. With nearly 2.7 million residents, it is the most populous city in the Midwestern United States and the third most populous in the US, after New York City and Los Angeles...
, underground stations of the Chicago Transit Authority
Chicago Transit Authority
Chicago Transit Authority, also known as CTA, is the operator of mass transit within the City of Chicago, Illinois and some of its surrounding suburbs....
are three-span stations if constructed with a centre platform.