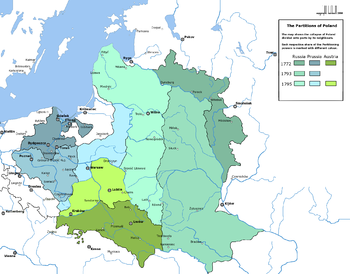 Major historical events of the Prussian partition include:

The Kingdom of Prussia divided the former territories of the Commonwealth it obtained into:

In the first partition, Prussia received 36,000 km² and about 600,000 people. In the second partition, Prussia received 58,000 km² and about 1 million people. In the third, similar to the second, Prussia gained 55,000 km² and 1 million people. Overall, Prussia gained about 20 percent of the former Commonwealth territory 149 000km²) and about 23 percent of the population (2.6 million people). From the geographical perspective, most of the territories annexed by Prussia formed the province of Greater Poland
Greater Poland
Greater Poland or Great Poland, often known by its Polish name Wielkopolska is a historical region of west-central Poland. Its chief city is Poznań.The boundaries of Greater Poland have varied somewhat throughout history...
(Wielkopolska).

Poles in the Prussian partition were subject to extensive Germanization policies (Kulturkampf
Kulturkampf
The German term refers to German policies in relation to secularity and the influence of the Roman Catholic Church, enacted from 1871 to 1878 by the Prime Minister of Prussia, Otto von Bismarck. The Kulturkampf did not extend to the other German states such as Bavaria...
, Hakata
German Eastern Marches Society
German Eastern Marches Society was a German radical, extremely nationalist xenophobic organization founded in 1894. Mainly among Poles, it was sometimes known acronymically as Hakata or H-K-T after its founders von Hansemann, Kennemann and von Tiedemann...
). Frederick the Great brought up 300.000 colonists on territories he conquered to facilitate Germanization.

That policy, however, had an opposite effect to that which the German leadership had expected: instead of becoming assimilated, the Polish minority in Germany became more organized, and its national consciousness grew. Of the three partitions, the education system in Prussia was on a much higher level than in Austria or Russia.