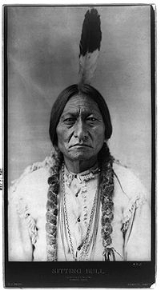 Overview
The Sioux are Native American
Native Americans in the United States
Native Americans in the United States are the indigenous peoples in North America within the boundaries of the present-day continental United States, parts of Alaska, and the island state of Hawaii. They are composed of numerous, distinct tribes, states, and ethnic groups, many of which survive as...
and First Nations
First Nations
First Nations is a term that collectively refers to various Aboriginal peoples in Canada who are neither Inuit nor Métis. There are currently over 630 recognised First Nations governments or bands spread across Canada, roughly half of which are in the provinces of Ontario and British Columbia. The...
people in North America. The term can refer to any ethnic group within the Great Sioux Nation
Great Sioux Nation
The Great Sioux Nation is a general term sometimes applied to the Sioux. The Great Sioux Nation is divided into three linguistically and regionally based groups and several subgroups:# Lakota...
or any of the nation's many language dialects. The Sioux comprise three major divisions based on Siouan dialect and subculture:


Today, the Sioux maintain many separate tribal governments scattered across several reservations, communities, and reserves in the Dakotas, Nebraska
Nebraska
Nebraska is a state on the Great Plains of the Midwestern United States. The state's capital is Lincoln and its largest city is Omaha, on the Missouri River....
, Minnesota, and Montana in the United States; and Manitoba
Manitoba
Manitoba is a Canadian prairie province with an area of . The province has over 110,000 lakes and has a largely continental climate because of its flat topography. Agriculture, mostly concentrated in the fertile southern and western parts of the province, is vital to the province's economy; other...
and southern Saskatchewan
Saskatchewan
Saskatchewan is a prairie province in Canada, which has an area of . Saskatchewan is bordered on the west by Alberta, on the north by the Northwest Territories, on the east by Manitoba, and on the south by the U.S. states of Montana and North Dakota....
in Canada
Canada
Canada is a North American country consisting of ten provinces and three territories. Located in the northern part of the continent, it extends from the Atlantic Ocean in the east to the Pacific Ocean in the west, and northward into the Arctic Ocean...
.
The name "Sioux" is an abbreviated form of Nadouessioux borrowed into Canadian French
Canadian French
Canadian French is an umbrella term referring to the varieties of French spoken in Canada. French is the mother tongue of nearly seven million Canadians, a figure constituting roughly 22% of the national population. At the federal level it has co-official status alongside English...
from Nadoüessioüak from the early Odawa exonym: naadowesiwag "Sioux".

What is the land mass of the assiniboine sioux tribe in montana?
More
x