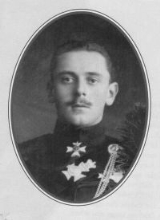 Encyclopedia
Prince Maurice of Battenberg, KCVO
Royal Victorian Order
The Royal Victorian Order is a dynastic order of knighthood and a house order of chivalry recognising distinguished personal service to the order's Sovereign, the reigning monarch of the Commonwealth realms, any members of her family, or any of her viceroys...
, (Maurice Victor Donald; 3 October 1891 – 27 October 1914) was a member of the Hessian
Hesse
Hesse or Hessia is both a cultural region of Germany and the name of an individual German state.* The cultural region of Hesse includes both the State of Hesse and the area known as Rhenish Hesse in the neighbouring Rhineland-Palatinate state...
princely Battenberg family
Battenberg family
The Battenberg family was a morganatic branch of the House of Hesse-Darmstadt, rulers of the Grand Duchy of Hesse in Germany. The first member was Julia Hauke, whose brother-in-law Grand Duke Louis III of Hesse created her Countess of Battenberg with the style Illustrious Highness in 1851, at her...
and the extended British Royal Family
British Royal Family
The British Royal Family is the group of close relatives of the monarch of the United Kingdom. The term is also commonly applied to the same group of people as the relations of the monarch in her or his role as sovereign of any of the other Commonwealth realms, thus sometimes at variance with...
, the youngest grandchild of Queen Victoria. He was known as Prince Maurice of Battenberg throughout his life, since he died before the British Royal Family relinquished their German titles during World War I
World War I
World War I , which was predominantly called the World War or the Great War from its occurrence until 1939, and the First World War or World War I thereafter, was a major war centred in Europe that began on 28 July 1914 and lasted until 11 November 1918...
and the Battenbergs changed their name to Mountbatten
Mountbatten
Mountbatten is the family name originally adopted by a branch of the Battenberg family due to rising anti-German sentiment among the British public during World War I...
.

As his father was the child of a morganatic marriage
Morganatic marriage
In the context of European royalty, a morganatic marriage is a marriage between people of unequal social rank, which prevents the passage of the husband's titles and privileges to the wife and any children born of the marriage...
, Prince Henry of Battenberg took his style of Prince of Battenberg from his mother, Countess Julia Hauke who was created Princess of Battenberg in her own right. As such, Maurice was styled as His Serene Highness Prince Maurice of Battenberg from birth. In the United Kingdom
United Kingdom
The United Kingdom of Great Britain and Northern IrelandIn the United Kingdom and Dependencies, other languages have been officially recognised as legitimate autochthonous languages under the European Charter for Regional or Minority Languages...
, he was styled His Highness Prince Maurice of Battenberg under a Royal Warrant
Royal Warrant
Royal warrants of appointment have been issued for centuries to those who supply goods or services to a royal court or certain royal personages. The warrant enables the supplier to advertise the fact that they supply to the royal family, so lending prestige to the supplier...
passed by Queen Victoria in 1886.

The youngest of his four siblings, Maurice most resembled his father, who died when the Prince was only four, the same age his mother was when her own father died. He was his mother's favourite out of his brothers. He was educated at Lockers Park Prep School in Hertfordshire
Hertfordshire
Hertfordshire is a ceremonial and non-metropolitan county in the East region of England. The county town is Hertford.The county is one of the Home Counties and lies inland, bordered by Greater London , Buckinghamshire , Bedfordshire , Cambridgeshire and...
.

Maurice attended the prestigious Wellington College and was a member of the Benson House. The young Prince served in World War I
World War I
World War I , which was predominantly called the World War or the Great War from its occurrence until 1939, and the First World War or World War I thereafter, was a major war centred in Europe that began on 28 July 1914 and lasted until 11 November 1918...
as a lieutenant in the King's Royal Rifle Corps
King's Royal Rifle Corps
The King's Royal Rifle Corps was a British Army infantry regiment, originally raised in colonial North America as the Royal Americans, and recruited from American colonists. Later ranked as the 60th Regiment of Foot, the regiment served for more than 200 years throughout the British Empire...
, and was killed in service in the Ypres Salient
First Battle of Ypres
The First Battle of Ypres, also called the First Battle of Flanders , was a First World War battle fought for the strategic town of Ypres in western Belgium...
in 1914. He is buried in Ypres Town Commonwealth War Graves Commission Cemetery.