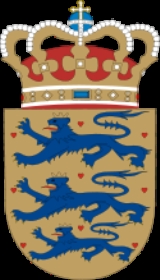 Prince Joachim of Denmark, Count of Monpezat, (pʰʁæns ˈjoækʰimˀ), ' onMouseout='HidePop("56434")' href="/topics/Copenhagen">Copenhagen
Copenhagen
Copenhagen is the capital and largest city of Denmark, with an urban population of 1,199,224 and a metropolitan population of 1,930,260 . With the completion of the transnational Øresund Bridge in 2000, Copenhagen has become the centre of the increasingly integrating Øresund Region...
, 7 June 1969) is a member of the Danish Royal Family
Danish Royal Family
The Danish Royal Family includes the Queen of Denmark and her family. All members except the Queen hold the title of Prince/Princess of Denmark with the style of His/Her Royal Highness or His/Her Highness. The Queen is styled Her Majesty. The Queen and her siblings belong to the House of...
. He is the younger son of Queen Margrethe II
Margrethe II of Denmark
Margrethe II is the Queen regnant of the Kingdom of Denmark. In 1972 she became the first female monarch of Denmark since Margaret I, ruler of the Scandinavian countries in 1375-1412 during the Kalmar Union.-Early life:...
and Henrik, Prince Consort of Denmark
Henrik, Prince Consort of Denmark
Henrik, Prince Consort of Denmark , is the husband of the Queen of Denmark, Margrethe II.-Early life:Henrik was born in Talence, Gironde, France...
.

Prince Joachim's godparents include Count Jean Baptiste de Laborde de Monpezat, Princess Benedikte of Denmark
Princess Benedikte of Denmark
Princess Benedikte of Denmark, Princess of Sayn-Wittgenstein-Berleburg, , , is the second daughter of King Frederick IX of Denmark and Ingrid of Sweden...
, and Princess Christina of Sweden
Princess Christina, Mrs. Magnuson
Princess Christina, Mrs. Magnuson, is the sister of Carl XVI Gustaf, the current King of Sweden. She was born at Haga Palace outside Stockholm. She is the fourth child of Prince Gustaf Adolf, Duke of Västerbotten, and Princess Sibylla of Saxe-Coburg-Gotha, and granddaughter of King Gustaf VI...
. The Prince's first language is Danish, but he also speaks French, English and German. He resides at Schackenborg Castle
Schackenborg Castle
Schackenborg Castle is a royal residence of the Danish monarch located in Møgeltønder, South Jutland.Originally called Møgeltønderhus the former stronghold on the site was the property of the Roman Catholic bishops of Ribe. It served as protection against the Frisians in the south, and guarded...
in Jutland
Jutland
Jutland , historically also called Cimbria, is the name of the peninsula that juts out in Northern Europe toward the rest of Scandinavia, forming the mainland part of Denmark. It has the North Sea to its west, Kattegat and Skagerrak to its north, the Baltic Sea to its east, and the Danish–German...
.

Prince Joachim attended school as a private pupil from 1974 until 1976 at Amalienborg Palace
Amalienborg Palace
Amalienborg Palace is the winter home of the Danish royal family, and is located in Copenhagen, Denmark. It consists of four identical classicizing palace façades with rococo interiors around an octagonal courtyard ; in the centre of the square is a monumental equestrian statue of Amalienborg's...
and then from 1976 until 1982 at Krebs' Skole in Copenhagen
Copenhagen
Copenhagen is the capital and largest city of Denmark, with an urban population of 1,199,224 and a metropolitan population of 1,930,260 . With the completion of the transnational Øresund Bridge in 2000, Copenhagen has become the centre of the increasingly integrating Øresund Region...
. In the period 1982–1983 the Prince studied as a boarder at École des Roches
in Normandy (France). In 1986 Prince Joachim graduated from the Øregaard Gymnasium. Over 1991–1993 he completed his studies in agrarian economics at Den Classenske Agerbrugskole Næsgaard.

Prince Joachim began his military education in 1987 as a recruit in the Queen's Own Regiment. In 1988 the prince became a sergeant
Sergeant
Sergeant is a rank used in some form by most militaries, police forces, and other uniformed organizations around the world. Its origins are the Latin serviens, "one who serves", through the French term Sergent....
, and a year later, a lieutenant of the reserve. Prince Joachim served as a platoon commander of a tank squadron from 1989 to 1990. In 1990 the Prince gained the rank of first lieutenant
First Lieutenant
First lieutenant is a military rank and, in some forces, an appointment.The rank of lieutenant has different meanings in different military formations , but the majority of cases it is common for it to be sub-divided into a senior and junior rank...
of the reserve, and in 1992 he was appointed Captain of the reserve. After appointment to Major of the reserve in 2005, the Prince remains active in the defence reserve.

On 18 November 1995 Joachim married in Hillerød
Hillerød
Hillerød Kommune is a municipality in Region Hovedstaden . The municipality covers an area of 191 km² , and has a total population of 46,568...
, near Copenhagen
Copenhagen
Copenhagen is the capital and largest city of Denmark, with an urban population of 1,199,224 and a metropolitan population of 1,930,260 . With the completion of the transnational Øresund Bridge in 2000, Copenhagen has become the centre of the increasingly integrating Øresund Region...
, Alexandra Christina Manley, now Alexandra Christina, Countess of Frederiksborg, a Hong Kong-born former sales and marketing deputy chief executive of British, Chinese
Han Chinese
Han Chinese are an ethnic group native to China and are the largest single ethnic group in the world.Han Chinese constitute about 92% of the population of the People's Republic of China , 98% of the population of the Republic of China , 78% of the population of Singapore, and about 20% of the...
, Czech and Austrian
Austrians
Austrians are a nation and ethnic group, consisting of the population of the Republic of Austria and its historical predecessor states who share a common Austrian culture and Austrian descent....
ancestry. The wedding took place in the Frederiksborg Palace Church
Frederiksborg Palace
Frederiksborg castle is a castle in Hillerød, Denmark. It was built as a royal residence for King Christian IV, and is now known as The Museum of National History. The current building replaced a previous castle erected by Frederick II, and is the largest Renaissance palace in Scandinavia...
.

They have two sons:

Unlike other inherited titles, neither son is styled as a Royal Highness per the Danish Royal Court. Both Princes hold the additional style of their father as Count of Monpezat.

On 16 September 2004 the couple announced their separation, and they divorced on 8 April 2005. Countess Alexandra of Frederiksborg subsequently married again and lost the title Princess of Denmark. She continues to live and work in Denmark and the couple share joint custody of their sons.

On 3 October 2007 the Danish Royal Court announced that Prince Joachim had become engaged to Marie Cavallier, now Princess Marie of Denmark
Princess Marie of Denmark
Marie Agathe Odile, Princess of Denmark, Countess of Monpezat, is the second wife of Prince Joachim of Denmark.-Early life:...
. The wedding took place on 24 May 2008 in Møgeltønder Church – in which the christening of Prince Felix
Prince Felix of Denmark
Prince Felix Henrik Valdemar Christian of Denmark, Count of Monpezat , is a member of the Danish Royal Family. He is the younger son of Prince Joachim and his former wife, Alexandra Christina, Countess of Frederiksborg...
had taken place – near Schackenborg Manor.
The wedding date marked the 73rd anniversary of the wedding of Joachim's grandparents, King Frederick IX and Ingrid of Sweden
Ingrid of Sweden
Ingrid of Sweden was a Swedish princess and the queen consort of King Frederick IX of Denmark.-Background:...
.


On 24 August 2011, the Danish Royal Court announced that Prince Joachim and Princess Marie are expecting their second child, due in January 2012.

His official title in Danish
Danish language
Danish is a North Germanic language spoken by around six million people, principally in the country of Denmark. It is also spoken by 50,000 Germans of Danish ethnicity in the northern parts of Schleswig-Holstein, Germany, where it holds the status of minority language...
is Hans Kongelige Højhed Prins Joachim af Danmark, Greve af Monpezat

According to the Dansk Rugby Union (DRU) website, he is the patron of the DRU.

He participated in a classic car race, part of the GTC-TC championship. He drove a BMW 2002, he shared the ride with Derek Bell.