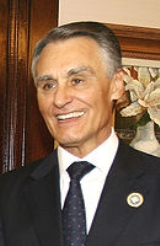 Encyclopedia
Portugal
Portugal
Portugal , officially the Portuguese Republic is a country situated in southwestern Europe on the Iberian Peninsula. Portugal is the westernmost country of Europe, and is bordered by the Atlantic Ocean to the West and South and by Spain to the North and East. The Atlantic archipelagos of the...
has been a republic
Republic
A republic is a form of government in which the people, or some significant portion of them, have supreme control over the government and where offices of state are elected or chosen by elected people. In modern times, a common simplified definition of a republic is a government where the head of...
since 1910, and since that time the head of state
Head of State
A head of state is the individual that serves as the chief public representative of a monarchy, republic, federation, commonwealth or other kind of state. His or her role generally includes legitimizing the state and exercising the political powers, functions, and duties granted to the head of...
has been the president
President
A president is a leader of an organization, company, trade union, university, or country.Etymologically, a president is one who presides, who sits in leadership...
, whose official title is President of the Portuguese Republic (Presidente da República Portuguesa, pɾɨziˈðẽtɨ ðɐ ʁɛˈpuβlikɐ).

Under the Portuguese Constitution adopted in 1976, in the wake of the 1974 Carnation Revolution
Carnation Revolution
The Carnation Revolution , also referred to as the 25 de Abril , was a military coup started on 25 April 1974, in Lisbon, Portugal, coupled with an unanticipated and extensive campaign of civil resistance...
, the President is elected to a five-year term, and may serve for a maximum of two consecutive terms. A president who serves two consecutive terms may run for a third and final non-consecutive term. The official residence of the Portuguese President is the Belém Palace
Belém Palace
The Belém National Palace, or alternately National Palace of Belém, has, overtime, been the official residence of Portuguese monarchs and, after the installation of the First Republic, the Presidents of the Portuguese Republic...
.

The President, however, has the discretionary power to dissolve Parliament when s/he sees fit, and President Sampaio made use of this prerogative in late 2004 to remove the controversial government of Pedro Santana Lopes
Pedro Santana Lopes
Pedro Miguel de Santana Lopes , a Portuguese lawyer and politician, was Prime Minister of Portugal from 2004 to 2005. He is a former and current Member of the Portuguese Parliament.-Background:...
, despite the absolute majority of MPs supporting the government.

If the president dies or becomes incapacitated while in office, the President of the Assembly assumes the office with restricted powers until a new president can be inaugurated following fresh elections.

Summary of the 23 January 2011 Portuguese
Portugal
Portugal , officially the Portuguese Republic is a country situated in southwestern Europe on the Iberian Peninsula. Portugal is the westernmost country of Europe, and is bordered by the Atlantic Ocean to the West and South and by Spain to the North and East. The Atlantic archipelagos of the...
presidential election results
Elections in Portugal
Elections in Portugal gives information on election and election results in Portugal.Only the elections since the Carnation Revolution of 1974 are listed here. During the period encompassing the Constitutional Monarchy and the First Republic there were also elections, but only for a limited...

|align=left|Socialist Party
Socialist Party (Portugal)
The Socialist Party , abbreviated to PS, is a social-democratic political party in Portugal. It was founded on 19 April 1973 in the German city of Bad Münstereifel, by militants from Portuguese Socialist Action ....
, Left Bloc, Democratic Party of the Atlantic
Democratic Party of the Atlantic
The Democratic Party of the Atlantic is one of the political parties in Portugal, without parliamentary representation. It is a small party whose electorate concentrates itself in São Miguel island, in the Azores. PDA promotes, officially, not independence, but home rule for the Azores, following...
, PCTP/MRPP
|align="right" |831,838
|align="right" |19.74
|-
|style="width: 8px" bgcolor=gray align="center" |
|align=left|Fernando Nobre
Fernando Nobre
Fernando José de La Vieter Ribeiro Nobre is a Portuguese doctor who is the founder and president of the Portuguese NGO AMI . In 2007 he was voted as the 25th greatest Portuguese ever in the contest Os Grandes Portugueses, being the 5th most voted among Portuguese living people at that date...