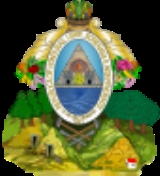 Encyclopedia
This page lists the Presidents of Honduras
Honduras
Honduras is a republic in Central America. It was previously known as Spanish Honduras to differentiate it from British Honduras, which became the modern-day state of Belize...
.

Colonial Honduras declared its independence from Spain
Spain
Spain , officially the Kingdom of Spain languages]] under the European Charter for Regional or Minority Languages. In each of these, Spain's official name is as follows:;;;;;;), is a country and member state of the European Union located in southwestern Europe on the Iberian Peninsula...
on 15 September 1821. From 5 January 1822 to 1 July 1823, Honduras was part of the First Mexican Empire
First Mexican Empire
The Mexican Empire was the official name of independent Mexico under a monarchical regime from 1821 to 1823. The territory of the Mexican Empire included the continental intendencies and provinces of New Spain proper...
of Agustín de Iturbide
Agustín de Iturbide
Agustín Cosme Damián de Iturbide y Aramburu , also known as Augustine I of Mexico, was a Mexican army general who built a successful political and military coalition that was able to march into Mexico City on 27 September 1821, decisively ending the Mexican War of Independence...
.

On 1 July 1823 Honduras. along with Guatemala
Guatemala
Guatemala is a country in Central America bordered by Mexico to the north and west, the Pacific Ocean to the southwest, Belize to the northeast, the Caribbean to the east, and Honduras and El Salvador to the southeast...
, El Salvador
El Salvador
El Salvador or simply Salvador is the smallest and the most densely populated country in Central America. The country's capital city and largest city is San Salvador; Santa Ana and San Miguel are also important cultural and commercial centers in the country and in all of Central America...
, Nicaragua
Nicaragua
Nicaragua is the largest country in the Central American American isthmus, bordered by Honduras to the north and Costa Rica to the south. The country is situated between 11 and 14 degrees north of the Equator in the Northern Hemisphere, which places it entirely within the tropics. The Pacific Ocean...
and Costa Rica
Costa Rica
Costa Rica , officially the Republic of Costa Rica is a multilingual, multiethnic and multicultural country in Central America, bordered by Nicaragua to the north, Panama to the southeast, the Pacific Ocean to the west and the Caribbean Sea to the east....
, declared their independence from Mexico
Mexico
The United Mexican States , commonly known as Mexico , is a federal constitutional republic in North America. It is bordered on the north by the United States; on the south and west by the Pacific Ocean; on the southeast by Guatemala, Belize, and the Caribbean Sea; and on the east by the Gulf of...
to form the short lived Federal Republic of Central America, also known as United Provinces of Central America. Honduras remained as a member state until it decided to separate in 1838. The entire union
Federation
A federation , also known as a federal state, is a type of sovereign state characterized by a union of partially self-governing states or regions united by a central government...
dissolved in civil war between 5 November 1838, when Nicaragua separated from the federation, and about 1840.

Presidents of the Independent Republic of Honduras (1839-Present)

Honduras declared itself independent on 15 November 1838, and a constitution was formally adopted in January 1839. After a period of instability, conservative General Francisco Ferrera
Francisco Ferrera
Francisco Ferrera was a president of Honduras. He was born in San Juan de Flores, Honduras.Ferrera joined the guerrerista campaigns of General Francisco Morazán and participated brilliantly in the battles of The Trinidad and Gualcho. In addition, he saw action in the pacification of Olancho...
became the first elective president of the country for a two-year term, but then extended his de facto control of the nation for the next five years.