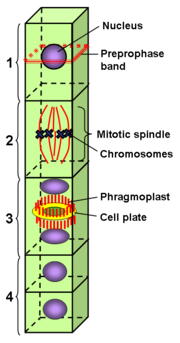 The preprophase band is a microtubule
Microtubule
Microtubules are a component of the cytoskeleton. These rope-like polymers of tubulin can grow as long as 25 micrometers and are highly dynamic. The outer diameter of microtubule is about 25 nm. Microtubules are important for maintaining cell structure, providing platforms for intracellular...
array found in plant cell
Plant cell
Plant cells are eukaryotic cells that differ in several key respects from the cells of other eukaryotic organisms. Their distinctive features include:...
s that are about to undergo cell division and enter the preprophase
Preprophase
Preprophase is an additional phase during mitosis in plant cells that does not occur in other eukaryotes such as animals or fungi. It precedes prophase and is characterized by two distinct events:...
stage of the plant cell cycle
Cell cycle
The cell cycle, or cell-division cycle, is the series of events that takes place in a cell leading to its division and duplication . In cells without a nucleus , the cell cycle occurs via a process termed binary fission...
. Besides the phragmosome
Phragmosome
The phragmosome is a sheet of cytoplasm forming in highly vacuolated plant cells in preparation for mitosis. In contrast to animal cells, plant cells often contain large central vacuoles occupying up to 90% of the total cell volume and pushing the nucleus against the cell wall. In order for mitosis...
, it is the first microscopically visible sign that a plant cell is about to enter mitosis
Mitosis
Mitosis is the process by which a eukaryotic cell separates the chromosomes in its cell nucleus into two identical sets, in two separate nuclei. It is generally followed immediately by cytokinesis, which divides the nuclei, cytoplasm, organelles and cell membrane into two cells containing roughly...
. The preprophase band was first observed and described by Jeremy Pickett-Heaps and Donald Northcote at Cambridge University in 1966.

Just before mitosis starts, the preprophase band forms as a dense band of microtubules around the phragmosome and the future division plane just below the plasma membrane. It encircles the nucleus
Cell nucleus
In cell biology, the nucleus is a membrane-enclosed organelle found in eukaryotic cells. It contains most of the cell's genetic material, organized as multiple long linear DNA molecules in complex with a large variety of proteins, such as histones, to form chromosomes. The genes within these...
at the equatorial plane of the future mitotic spindle
Mitotic spindle
In cell biology, the spindle fibers are the structure that separates the chromosomes into the daughter cells during cell division. It is part of the cytoskeleton in eukaryotic cells...
when dividing cells enter the G2 phase
G2 phase
G2 phase is the 3rd and final subphase of Interphase in the cell cycle directly preceding Mitosis. It follows the successful completion of S phase, during which the cell’s DNA is replicated...
of the cell cycle
Cell cycle
The cell cycle, or cell-division cycle, is the series of events that takes place in a cell leading to its division and duplication . In cells without a nucleus , the cell cycle occurs via a process termed binary fission...
after DNA replication
DNA replication
DNA replication is a biological process that occurs in all living organisms and copies their DNA; it is the basis for biological inheritance. The process starts with one double-stranded DNA molecule and produces two identical copies of the molecule...
is complete. The preprophase band consists mainly of microtubules and microfilament
Microfilament
Microfilaments are the thinnest filaments of the cytoskeleton, a structure found in the cytoplasm of all eukaryotic cells. These linear polymers of actin subunits are flexible and relatively strong, resisting buckling by multi-piconewton compressive forces and filament fracture by nanonewton...
s (actin) and is generally 2-3 µm wide. When stained with fluorescent markers, it can be seen as two bright spots close to the cell wall
Cell wall
The cell wall is the tough, usually flexible but sometimes fairly rigid layer that surrounds some types of cells. It is located outside the cell membrane and provides these cells with structural support and protection, and also acts as a filtering mechanism. A major function of the cell wall is to...
on either side of the nucleus.

The preprophase band disappears as soon as the nuclear envelope breaks down and the mitotic spindle forms, leaving behind an actin-depleted zone. However, its position marks the future fusion sites for the new cell plate
Cell plate
thumb|300px|Phragmoplast and cell plate formation in a plant cell during cytokinesis. Left side: Phragmoplast forms and cell plate starts to assemble in the center of the cell. Toawards the right: Phragmoplast enlarges in a donut-shape towards the outside of the cell, leaving behind mature cell...
with the existing cell wall during telophase
Telophase
Telophase from the ancient Greek "τελος" and "φασις" , is a stage in both meiosis and mitosis in a eukaryotic cell. During telophase, the effects of prophase and prometaphase events are reversed. Two daughter nuclei form in the cell. The nuclear envelopes of the daughter cells are formed from the...
. When mitosis is completed, the cell plate and new cell wall form starting from the center along the plane occupied by the phragmosome. The cell plate grows outwards until it fuses with the cell wall of the dividing cell at exactly the spots predicted by the position of the preprophase band.
The source of this article is wikipedia, the free encyclopedia.  The text of this article is licensed under the GFDL.