Encyclopedia
The Potemkin Stairs is a giant stairway in Odessa
Odessa
Odessa or Odesa is the administrative center of the Odessa Oblast located in southern Ukraine. The city is a major seaport located on the northwest shore of the Black Sea and the fourth largest city in Ukraine with a population of 1,029,000 .The predecessor of Odessa, a small Tatar settlement,...
, Ukraine
Ukraine
Ukraine is a country in Eastern Europe. It has an area of 603,628 km², making it the second largest contiguous country on the European continent, after Russia...
. The stairs are considered a formal entrance into the city from the direction of the sea and are the best known symbol of Odessa.

Officially known today as the Primorsky Stairs, they were originally known as the Boulevard steps, the Giant Staircase, or the Richelieu steps.

The stairs were designed to create an optical illusion
Optical illusion
An optical illusion is characterized by visually perceived images that differ from objective reality. The information gathered by the eye is processed in the brain to give a perception that does not tally with a physical measurement of the stimulus source...
. A person looking down the stairs sees only the landings, and the steps are invisible, but a person looking up sees only steps, and the landings are invisible. A secondary illusion creates false perspective since the stairs are wider at the bottom than at the top. Looking up the stairs makes them seem longer than they are and looking down the stairs makes them seem not so long.

In 1837, the decision was made to build a "monstrous staircase", which was constructed between 1837 and 1841. An English engineer named John Upton constructed the stairs. Upton had fled Britain while on bail for forgery. Greenish-grey sandstone from the extreme northeastern Italian
Italy
Italy , officially the Italian Republic languages]] under the European Charter for Regional or Minority Languages. In each of these, Italy's official name is as follows:;;;;;;;;), is a unitary parliamentary republic in South-Central Europe. To the north it borders France, Switzerland, Austria and...
town of Trieste
Trieste
Trieste is a city and seaport in northeastern Italy. It is situated towards the end of a narrow strip of land lying between the Adriatic Sea and Italy's border with Slovenia, which lies almost immediately south and east of the city...
(at the time it was an Austria
Austrian Empire
The Austrian Empire was a modern era successor empire, which was centered on what is today's Austria and which officially lasted from 1804 to 1867. It was followed by the Empire of Austria-Hungary, whose proclamation was a diplomatic move that elevated Hungary's status within the Austrian Empire...
n town) was shipped in.

The steps were made famous in Sergei Eisenstein
Sergei Eisenstein
Sergei Mikhailovich Eisenstein , né Eizenshtein, was a pioneering Soviet Russian film director and film theorist, often considered to be the "Father of Montage"...
's 1925 silent film The Battleship Potemkin
The Battleship Potemkin
The Battleship Potemkin , sometimes rendered as The Battleship Potyomkin, is a 1925 silent film directed by Sergei Eisenstein and produced by Mosfilm...
; according to the fictionalized account in that film, soldiers opened fire on the people on the stairs on June 14, 1905. According to journalist Chukovsky
Korney Chukovsky
Korney Ivanovich Chukovsky was one of the most popular children's poets in the Russian language. His poems, Doctor Aybolit , The Giant Roach , The Crocodile , and Wash'em'clean have been favourites with many generations of Russophone children...
, who was in the city during the events, it is unknown whether the Cossacks at the top of the stairs, that were filled with people, actually opened fire on the stairs. In Eisenstein's movie the horrific events that actually took place in various parts of the city were concentrated at the stairs. Similar method used later photographer and artist Alexey Titarenko
Alexey Titarenko
Alexey Viktorovich Titarenko is a Soviet and Russian photographer and artist.-Biography:At age 15, he became the youngest member of the independent photo club Zerkalo [Mirror]...
in his series "City of Shadows" (1991-1993) using crowd of desperate people at the stairs near subway station in Saint Petersburg as a symbol of human tragedy. Noted film critic Roger Ebert
Roger Ebert
Roger Joseph Ebert is an American film critic and screenwriter. He is the first film critic to win a Pulitzer Prize for Criticism.Ebert is known for his film review column and for the television programs Sneak Previews, At the Movies with Gene Siskel and Roger Ebert, and Siskel and Ebert and The...
writes, "That there was, in fact, no Czarist massacre on the Odessa Steps scarcely diminishes the power of the scene ... It is ironic that [Eisenstein] did it so well that today the bloodshed on the Odessa steps is often referred to as if it really happened."

As erosion destroyed the stairs, in 1933 the sandstone was replaced by rose-grey granite from the Southern Bug
Southern Bug
The Southern Bug, also called Southern Buh), is a river located in Ukraine. The source of the river is in the west of Ukraine, in the Volyn-Podillia Upland, about 145 km from the Polish border, and flows southeasterly into the Bug Estuary through the southern steppes...
area, and the landings were covered with asphalt. Eight steps were lost under the sand when the port was being extended, reducing the number of stairs to 192, with ten landings.

On the left side of the stairs, a funicular
Funicular
A funicular, also known as an inclined plane or cliff railway, is a cable railway in which a cable attached to a pair of tram-like vehicles on rails moves them up and down a steep slope; the ascending and descending vehicles counterbalance each other.-Operation:The basic principle of funicular...
was built in 1906 to transport people up instead of walking. After 50 years of operation, the funicular was outdated and was later replaced by an escalator built in 1970. The escalator broke in the 1990s, the money for its repair was stolen, but it was replaced with a new funicular in 2004. 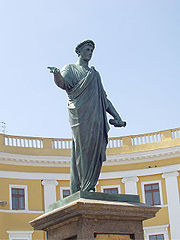 At the top of the stairs stands a monument depicting the Armand-Emmanuel du Plessis, Duc de Richelieu
Armand-Emmanuel du Plessis, Duc de Richelieu
Armand Emmanuel Sophie Septimanie de Vignerot du Plessis, 5th Duke of Richelieu was a prominent French statesman during the Bourbon Restoration...
, a French nobleman who became Odessa's first governor in 1803. The Russian sculptor Ivan Petrovich Martos (1754–1835) designed the Roman-toga-clad figure. The statue was cast in bronze by Yefimov
Yefimov
Yefimov, sometimes spelled Efimov , or Yefimova is a Russian last name and may refer to:*Alexander Yefimov , a Soviet aircraft pilot and twice Hero of the Soviet Union...
and unveiled in 1826 - the first monument erected in the city.