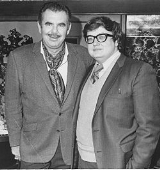 Overview
Roger Joseph Ebert is an American film critic
Film criticism
Film criticism is the analysis and evaluation of films, individually and collectively. In general, this can be divided into journalistic criticism that appears regularly in newspapers, and other popular, mass-media outlets and academic criticism by film scholars that is informed by film theory and...
and screenwriter
Screenwriter
Screenwriters or scriptwriters or scenario writers are people who write/create the short or feature-length screenplays from which mass media such as films, television programs, Comics or video games are based.-Profession:...
. He is the first film critic to win a Pulitzer Prize for Criticism
Pulitzer Prize for Criticism
The Pulitzer Prize for Criticism has been presented since 1970 to a newspaper writer who has demonstrated 'distinguished criticism'. Recipients of the award are chosen by an independent board and officially administered by Columbia University...
.

Ebert is known for his film review column (appearing in the Chicago Sun-Times
Chicago Sun-Times
The Chicago Sun-Times is an American daily newspaper published in Chicago, Illinois. It is the flagship paper of the Sun-Times Media Group.-History:The Chicago Sun-Times is the oldest continuously published daily newspaper in the city...
since 1967, and later online) and for the television program
Television program
A television program , also called television show, is a segment of content which is intended to be broadcast on television. It may be a one-time production or part of a periodically recurring series...
s Sneak Previews
Sneak Previews
Sneak Previews was an American film review show, running for over two decades on Public Broadcasting Service . It was created by WTTW, a PBS affiliate in Chicago, Illinois. It premiered on September 4, 1975 as a monthly local-only show called Opening Soon at a Theater Near You, and was renamed in...
, At the Movies with Gene Siskel and Roger Ebert, and Siskel and Ebert and The Movies, all of which he co-hosted for a combined 23 years with Gene Siskel
Gene Siskel
Eugene Kal "Gene" Siskel was an American film critic and journalist for the Chicago Tribune. Along with colleague Roger Ebert, he hosted the popular review show Siskel & Ebert At the Movies from 1975 until his death....
. After Siskel's death in 1999, Ebert teamed with Richard Roeper
Richard Roeper
Richard E. Roeper is an American columnist and film critic for The Chicago Sun-Times and now a co-host on The Roe Conn Show on WLS-AM...
for the television series Ebert & Roeper & the Movies, which began airing in 2000.

Of what use is freedom of speech to those who fear to offend?

The Roger Ebert's Overlooked Film Festival|Golden Thumb is not as good as the Oscar, but it is a lot of fun.