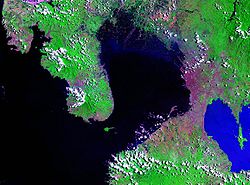 The Port of Manila
Manila
Manila is the capital of the Philippines. It is one of the sixteen cities forming Metro Manila.Manila is located on the eastern shores of Manila Bay and is bordered by Navotas and Caloocan to the north, Quezon City to the northeast, San Juan and Mandaluyong to the east, Makati on the southeast,...
is the largest seaport in the Philippines
Philippines
The Philippines , officially known as the Republic of the Philippines , is a country in Southeast Asia in the western Pacific Ocean. To its north across the Luzon Strait lies Taiwan. West across the South China Sea sits Vietnam...
, and is the premier international shipping gateway
Port
A port is a location on a coast or shore containing one or more harbors where ships can dock and transfer people or cargo to or from land....
to the country. It is located in the vicinity of Manila Bay
Manila Bay
Manila Bay is a natural harbor which serves the Port of Manila , in the Philippines.The bay is considered to be one of the best natural harbors in Southeast Asia and one of the finest in the world...
. 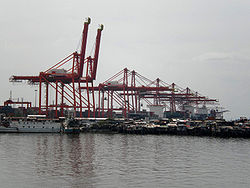 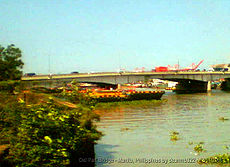 In a 2005 study, the Port of Manila was listed as the world's 31st most active container port, moving worth of containers that year.

The bay entrance is 19 kilometres (12 mi) wide and expands to a width of 48 kilometres (30 mi). Mariveles
Mariveles, Bataan
Mariveles is a 1st class municipality in the province of Bataan, Philippines. According to the latest census, it has a population of 102,844 people in 19,460 households...
, in the province of Bataan
Bataan
Bataan is a province of the Philippines occupying the whole of the Bataan Peninsula on Luzon. The province is part of the Central Luzon region. The capital of Bataan is Balanga City and it is bordered by the provinces of Zambales and Pampanga to the north...
, is an anchorage just inside the northern entrance, and Sangley Point is the former location of Cavite Naval Base.

On either side of the bay are volcanic
Volcano
2. Bedrock3. Conduit 4. Base5. Sill6. Dike7. Layers of ash emitted by the volcano8. Flank| 9. Layers of lava emitted by the volcano10. Throat11. Parasitic cone12. Lava flow13. Vent14. Crater15...
peaks topped with tropical foliage. 40 kilometres (25 mi) to the north is the Bataan Peninsula
Bataan Peninsula
The Bataan Peninsula is a rocky extension of the Zambales Mountains, on Luzon in the Philippines. It separates the Manila Bay from the South China Sea...
and to the south is the province of Cavite
Cavite
Cavite is a province of the Philippines located on the southern shores of Manila Bay in the CALABARZON region in Luzon, just 30 kilometers south of Manila. Cavite is surrounded by Laguna to the east, Metro Manila to the northeast, and Batangas to the south...
.

The Port of Manila and the area dates back to Spanish and pre-Spanish rule of the Philippine Islands. It is recorded that Manila and the Philippines had trade relations with most neighboring countries at least as far back as the 9th to 12th centuries. Major trading partners included China
China
Chinese civilization may refer to:* China for more general discussion of the country.* Chinese culture* Greater China, the transnational community of ethnic Chinese.* History of China* Sinosphere, the area historically affected by Chinese culture...
and Japan
Japan
Japan is an island nation in East Asia. Located in the Pacific Ocean, it lies to the east of the Sea of Japan, China, North Korea, South Korea and Russia, stretching from the Sea of Okhotsk in the north to the East China Sea and Taiwan in the south...
, with ties to India
India
India , officially the Republic of India , is a country in South Asia. It is the seventh-largest country by geographical area, the second-most populous country with over 1.2 billion people, and the most populous democracy in the world...
through the areas that are now Malaysia and Indonesia
Indonesia
Indonesia , officially the Republic of Indonesia , is a country in Southeast Asia and Oceania. Indonesia is an archipelago comprising approximately 13,000 islands. It has 33 provinces with over 238 million people, and is the world's fourth most populous country. Indonesia is a republic, with an...
. The Spanish-controlled Port of Manila handled trade primarily with China and other East Asian countries, with Mexico, with Arab countries, and directly with Spain from the 16th to mid-19th century CE when the port was opened to all trade ships.

The port was also the staging point for the Manila galleons, a state-monopoly shipping line running to Acapulco
Acapulco
Acapulco is a city, municipality and major sea port in the state of Guerrero on the Pacific coast of Mexico, southwest from Mexico City. Acapulco is located on a deep, semi-circular bay and has been a port since the early colonial period of Mexico’s history...
and back, which operated virtually continuously from the 16th to the early 19th century CE.