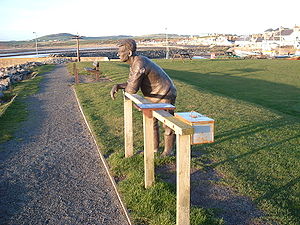 Port William is a small fishing village in the county of Wigtownshire
Wigtownshire
Wigtownshire or the County of Wigtown is a registration county in the Southern Uplands of south west Scotland. Until 1975, the county was one of the administrative counties used for local government purposes, and is now administered as part of the council area of Dumfries and Galloway...
in south west Scotland
Scotland
Scotland is a country that is part of the United Kingdom. Occupying the northern third of the island of Great Britain, it shares a border with England to the south and is bounded by the North Sea to the east, the Atlantic Ocean to the north and west, and the North Channel and Irish Sea to the...
. At present it comes under the administrative authority of Dumfries and Galloway
Dumfries and Galloway
Dumfries and Galloway is one of 32 unitary council areas of Scotland. It was one of the nine administrative 'regions' of mainland Scotland created in 1975 by the Local Government etc. Act 1973...
. It is surrounded by the hamlets
Hamlet (place)
A hamlet is usually a rural settlement which is too small to be considered a village, though sometimes the word is used for a different sort of community. Historically, when a hamlet became large enough to justify building a church, it was then classified as a village...
of Elrig
Elrig
Elrig is a Clachan in Dumfries and Galloway, Scotland. Located in the Machars peninsula, about 3 miles north of Port William.Elrig is the birthplace of author and naturalist Gavin Maxwell, who was born at the House of Elrig. His boyhood is recounted in The House of Elrig, published in 1965...
, Mochrum
Mochrum
Mochrum is a small agricultural parish in Wigtownshire on the west of the Machars peninsula, Dumfries and Galloway, Scotland. It has a population of about 125 which is considerably lower than the population of about 150 years ago. It lies 3.1 km north of the small fishing village of Port...
and Monreith
Monreith
Monreith is a small seaside town located in the Machars, Dumfries and Galloway, Scotland....
.

The original settlement was known as Killantrae, meaning 'The Church on the Beach' in Gaelic, and was probably founded not long after St Ninian arrival in nearby Whithorn
Whithorn
Whithorn is a former royal burgh in Dumfries and Galloway, Scotland, about ten miles south of Wigtown. The town was the location of the first recorded Christian church in Scotland, Candida Casa : the 'White [or 'Shining'] House', built by Saint Ninian about 397.-Eighth and twelfth centuries:A...
towards the end of the 4th century.

Killantrae was swept away following the intervention of developer and landlord Sir William Maxwell of Monreith
Monreith
Monreith is a small seaside town located in the Machars, Dumfries and Galloway, Scotland....
. In the five years until 1776 he built an entirely new village, complete with a good harbour and was renamed Port William. One of the earliest buildings still standing was the corn mill, located on the side of the Killantrae burn to take advantage of the power provided by its water. Port William is an example of a planned village, lying on the eastern shore of Luce Bay
Luce Bay
Luce Bay is a large bay in Wigtownshire in southern Scotland. The bay is 20 miles wide at its mouth and is bounded by the Rhins of Galloway to the west and the Machars to the east....
in Galloway. The harbour, built for the convenience of his tenant farmers, was one of the first in western Galloway.

The harbour was extended in 1790 and again in 1848, and it continued to have commercial importance until the end of the First World War. It then steadily became what you see today, a haven for small fishing and leisure craft. Further work was done to protect the harbour in the 1980s by building a breakwater to the western side of the harbour.

In the 17th and 18th centuries Port William was known as much for the illicit activities of its smugglers as for the legitimate trade of its port. A more recent reflection of this seafaring heritage is found in the life-size fisherman's statue overlooking the harbour. This was once made of concrete, but following a public appeal it has been remade in bronze. The statue was part-funded by the millennium lottery fund. In front of the statue is a plaque with the first verse of the poem Leisure
Leisure (poem)
Leisure is a poem by Welsh poet William Henry Davies, appearing originally in his Songs Of Joy and Others, published in 1911 by A. C. Fifield and then in Davies' first anthology Collected Poems, also published by Fifield in 1916.-Structure:...
by W. H. Davies
W. H. Davies
William Henry Davies or W. H. Davies was a Welsh poet and writer. Davies spent a significant part of his life as a tramp or vagabond in the United States and United Kingdom, but became known as one of the most popular poets of his time...
.

Monreith House
Monreith House
Monreith House is a category A listed Georgian mansion located east of the village of Port William in Mochrum parish, Dumfries and Galloway, Scotland. The classical-style house was designed by Alexander Stevens in 1791, for Sir William Maxwell, 4th Baronet. The new house replaced the now-ruined...
, a category A listed Georgian
Georgian architecture
Georgian architecture is the name given in most English-speaking countries to the set of architectural styles current between 1720 and 1840. It is eponymous for the first four British monarchs of the House of Hanover—George I of Great Britain, George II of Great Britain, George III of the United...
mansion is located 1.5 kilometre (0.93205910497471 mi) east of the village.

The village at present has a population of approximately 460 and lies 23 miles east of the town of Stranraer
Stranraer
Stranraer is a town in the southwest of Scotland. It lies in the west of Dumfries and Galloway and in the county of Wigtownshire.Stranraer lies on the shores of Loch Ryan on the northern side of the isthmus joining the Rhins of Galloway to the mainland...
, on the coast of Luce Bay. It looks directly over to the Mull of Galloway
Mull of Galloway
The Mull of Galloway is the southernmost point of Scotland. It is situated in Wigtownshire, Dumfries and Galloway.A lighthouse is positioned at the point . Built in 1830 by engineer Robert Stevenson, the white-painted round tower is high...
, the most southerly point of the Scottish mainland and, on a clear day, both the Isle of Man
Isle of Man
The Isle of Man , otherwise known simply as Mann , is a self-governing British Crown Dependency, located in the Irish Sea between the islands of Great Britain and Ireland, within the British Isles. The head of state is Queen Elizabeth II, who holds the title of Lord of Mann. The Lord of Mann is...
, and Ireland
Ireland
Ireland is an island to the northwest of continental Europe. It is the third-largest island in Europe and the twentieth-largest island on Earth...
are visible from the rugged coastline.

Being a little isolated from the mad rush of modern life, Port William's community has worked together to achieve many successful projects. Following the withdrawal of the RNLI lifeboat, Port William raised the necessary funds and volunteers to buy and staff an Inshore Rescue Boat in about 1982, which still operates today, covering Luce Bay, Wigtown Bay and the area between South West Scotland and the Isle of Man. The village formed one of the first Community First Response Teams in Scotland and has helped to set up other teams in the area. The Kings Green Caravan Park is community owned and employs two wardens. Charges are kept low to encourage tourism and all profits come back into the community. In 2010, the caravan park opened its laundry and dishwashing facility (an extension built onto the newly-constructed toilet block).

The village gives a warm welcome to tourists and has one of the largest carnivals in South West Scotland at the beginning of August. In 2007 it was awarded the Leader+ "Most Vibrant Village" award and in 2008 won the Southern Scotland Regional Title of the Calor Scottish Village of the Year award.
The source of this article is wikipedia, the free encyclopedia.  The text of this article is licensed under the GFDL.