Encyclopedia
Robert II called the Pious or the Wise , was King of France from 996 until his death. The second reigning member of the House of Capet
House of Capet
The House of Capet, or The Direct Capetian Dynasty, , also called The House of France , or simply the Capets, which ruled the Kingdom of France from 987 to 1328, was the most senior line of the Capetian dynasty – itself a derivative dynasty from the Robertians. As rulers of France, the dynasty...
, he was born in Orléans
Orléans
-Prehistory and Roman:Cenabum was a Gallic stronghold, one of the principal towns of the Carnutes tribe where the Druids held their annual assembly. It was conquered and destroyed by Julius Caesar in 52 BC, then rebuilt under the Roman Empire...
to Hugh Capet and Adelaide of Aquitaine
Adelaide of Aquitaine
Adbelahide or Adele or Adelaide of Aquitaine was the daughter of William III, Duke of Aquitaine and Adele of Normandy, daughter of Rollo of Normandy....
. 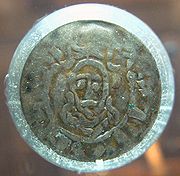 Immediately after his own coronation, Robert's father Hugh began to push for the coronation of Robert. "The essential means by which the early Capetians were seen to have kept the throne in their family was through the association of the eldest surviving son in the royalty during the father's lifetime," Andrew W. Lewis has observed, in tracing the phenomenon in this line of kings who lacked dynastic legitimacy. Hugh's claimed reason was that he was planning an expedition against the Moorish armies harassing Borrel II of Barcelona, an invasion which never occurred, and that the stability of the country necessitated a co-king, should he die while on expedition. Ralph Glaber, however, attributes Hugh's request to his old age and inability to control the nobility. Modern scholarship has largely imputed to Hugh the motive of establishing a dynasty against the claims of electoral power on the part of the aristocracy, but this is not the typical view of contemporaries and even some modern scholars have been less sceptical of Hugh's "plan" to campaign in Spain. Robert was eventually crowned on 25 December 987. A measure of Hugh's success is that when Hugh died in 996, Robert continued to reign without any succession dispute, but during his long reign actual royal power dissipated into the hands of the great territorial magnates.

Robert had begun to take on active royal duties with his father in the early 990s. In 991, he helped his father prevent the French bishops from trekking to Mousson
Mousson
Mousson is a commune in the Meurthe-et-Moselle department in north-eastern France....
in the Kingdom of Germany
Kingdom of Germany
The Kingdom of Germany developed out of the eastern half of the former Carolingian Empire....
for a synod called by Pope John XV
Pope John XV
Pope John XV , Pope from 985 to 996, succeeding Boniface VII . He was said to have been Pope after another Pope John that reigned four months after Pope John XIV and was named "Papa Ioannes XIV Bis" or "Pope John XIVb"...
, with whom Hugh was then in disagreement.

As early as 989, having been rebuffed in his search for a Byzantine princess, Hugh Capet arranged for Robert to marry the recently-widowed daughter of Berengar II of Italy
Berengar II of Italy
Berengar of Ivrea , sometimes also referred to as Berengar II of Italy, was Margrave of Ivrea and usurper King of Italy from 950 until his deposition in 961, the last before Italy's incorporation into the Holy Roman Empire...
, Rozala
Rozala of Italy
Rozala of Italy was the daughter of King Berengar II of Italy. By her first marriage, she was Countess of Flanders; by her second, she was Queen of France. She was a seventh generation descendant of Charlemagne.Her first marriage was to Count Arnulf II of Flanders...
, who took the name of Susannah upon becoming Queen. She was many years his senior. She was the widow of Arnulf II of Flanders, with whom she had children, the oldest of whom was of age to assume the offices of count of Flanders. Robert divorced her within a year of his father's death. He tried instead to marry Bertha
Bertha of Burgundy
Bertha of Burgundy was the daughter of Conrad the Peaceful, King of Burgundy and his wife Matilda, daughter of Louis IV, King of France and Gerberga of Saxony. She was named for her father's mother, Bertha of Swabia.She first married Odo I, Count of Blois in about 983...
, daughter of Conrad of Burgundy
Conrad of Burgundy
Conrad the Peaceful was the king of Burgundy from 937 until his death. He was the son of King Rudolph II, the first king of a united Burgundy and Bertha of Swabia...
, around the time of his father's death. She was a widow of Odo I of Blois, but was also Robert's cousin. For reasons of consanguinity
Consanguinity
Consanguinity refers to the property of being from the same kinship as another person. In that respect, consanguinity is the quality of being descended from the same ancestor as another person...
, Pope Gregory V
Pope Gregory V
Pope Gregory V, né Bruno of Carinthia , Pope from May 3, 996 to February 18, 999, son of the Salian Otto I, Duke of Carinthia, who was a grandson of the Emperor Otto I the Great . Gregory V succeeded Pope John XV , when only twenty-four years of age...
refused to sanction the marriage, and Robert was excommunicated
Excommunication
Excommunication is a religious censure used to deprive, suspend or limit membership in a religious community. The word means putting [someone] out of communion. In some religions, excommunication includes spiritual condemnation of the member or group...
. After long negotiations with Gregory's successor, Sylvester II
Pope Silvester II
Pope Sylvester II , born Gerbert d'Aurillac, was a prolific scholar, teacher, and Pope. He endorsed and promoted study of Arab/Greco-Roman arithmetic, mathematics, and astronomy, reintroducing to Europe the abacus and armillary sphere, which had been lost to Europe since the end of the Greco-Roman...
, the marriage was annulled.

Finally, in 1001, Robert entered into his final and longest-lasting marriage to Constance of Arles
Constance of Arles
Constance of Arles , also known as Constance of Provence, was the third wife and queen of King Robert II of France. She was the daughter of William I, count of Provence and Adelais of Anjou, daughter of Fulk II of Anjou...
, the daughter of William I of Provence
William I of Provence
William I , called the Liberator, was Count of Provence from 968 to his abdication. In 975 or 979, he took the title of marchio or margrave. He is often considered the founder of the county of Provence...
. Her southern customs and entourage were regarded with suspicion at court. After his companion Hugh of Beauvais urged the king to repudiate her as well, knights of her kinsman Fulk Nerra
Fulk III of Anjou
Fulk III , called Nerra after his death, was Count of Anjou from 21 July 987 to his death. He was the son of Geoffrey Greymantle and Adelaide of Vermandois....
had Beauvais murdered. The king and Bertha then went to Rome to ask Pope Sergius IV
Pope Sergius IV
Pope Sergius IV , born Pietro Martino Buccaporci, was Pope from July 31, 1009, until his death. The date of his birth is unknown. His birth name is believed to have been Pietro Martino Buccaporci...
for an annulment so they could remarry. After this was refused, he went back to Constance and fathered several children by her. Her ambition alienated the chroniclers of her day, who blamed her for several of the king's decisions. However, they remained married until his death in 1031.

Robert, however, despite his marital problems, was a very devout Catholic, hence his sobriquet "the Pious." He was musically inclined, being a composer, chorister, and poet, and making his palace a place of religious seclusion, where he conducted the matins and vespers in his royal robes. However, to contemporaries, Robert's "piety" also resulted from his lack of toleration for heretics: he harshly punished them. Indeed, he is credited with advocating forced conversions of local Jewry, as well as mob violence against Jews who refused. Furthermore, Robert reinstated the Roman imperial custom of burning heretics at the stake. 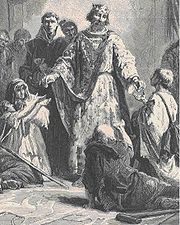 The pious Robert made few friends and many enemies, including his own sons: Hugh Magnus
Hugh Magnus of France
Hugh Magnus of France was co-King of France under his father, Robert II, from 1017 until his death in 1025...
, Henry
Henry I of France
Henry I was King of France from 1031 to his death. The royal demesne of France reached its smallest size during his reign, and for this reason he is often seen as emblematic of the weakness of the early Capetians...
, and Robert
Robert I, Duke of Burgundy
Robert I Capet or Robert I of Burgundy, known as Robert the Old was duke of Burgundy between 1032 to his death...
. They turned against their father in a civil war over power and property. Hugh died in revolt in 1025. In a conflict with Henry and the younger Robert, King Robert's army was beaten and he retreated to Beaugency
Beaugency
Beaugency is a commune in the Loiret department in north-central France. It is located on the Loire river, upriver from Blois and downriver from Orléans.-History:...
outside Paris, his capital. He died in the middle of the war with his sons on 20 July 1031 at Melun
Melun
Melun is a commune in the Seine-et-Marne department in the Île-de-France region in north-central France. Located in the south-eastern suburbs of Paris, Melun is the capital of the department, as the seat of an arrondissement...
. He was interred with Constance in Saint Denis Basilica
Saint Denis Basilica
The Cathedral Basilica of Saint Denis is a large medieval abbey church in the commune of Saint-Denis, now a northern suburb of Paris. The abbey church was created a cathedral in 1966 and is the seat of the Bishop of Saint-Denis, Pascal Michel Ghislain Delannoy...
. He was succeeded by his son Henry, in both France and Burgundy.

Robert had no children from his short-lived marriage to Susanna. His illegal marriage to Bertha gave him one stillborn son in 999, but only Constance gave him surviving children: