Encyclopedia
The Pont des Arts or Passerelle des Arts is a pedestrian bridge
Bridge
A bridge is a structure built to span physical obstacles such as a body of water, valley, or road, for the purpose of providing passage over the obstacle...
in Paris
Paris
Paris is the capital and largest city in France, situated on the river Seine, in northern France, at the heart of the Île-de-France region...
which crosses the Seine
Seine
The Seine is a -long river and an important commercial waterway within the Paris Basin in the north of France. It rises at Saint-Seine near Dijon in northeastern France in the Langres plateau, flowing through Paris and into the English Channel at Le Havre . It is navigable by ocean-going vessels...
River. It links the Institut de France
Institut de France
The Institut de France is a French learned society, grouping five académies, the most famous of which is the Académie française.The institute, located in Paris, manages approximately 1,000 foundations, as well as museums and chateaux open for visit. It also awards prizes and subsidies, which...
and the central square (cour carrée) of the palais du Louvre
Louvre
The Musée du Louvre – in English, the Louvre Museum or simply the Louvre – is one of the world's largest museums, the most visited art museum in the world and a historic monument. A central landmark of Paris, it is located on the Right Bank of the Seine in the 1st arrondissement...
, (which had been termed the "Palais des Arts" under the First Empire
First French Empire
The First French Empire , also known as the Greater French Empire or Napoleonic Empire, was the empire of Napoleon I of France...
).

Between 1802 and 1804, a nine-arch metallic bridge for pedestrians was constructed at the location of the present day Pont des Arts: this was the first metal bridge in Paris. This innovation was due to Napoléon I
Napoleon I
Napoleon Bonaparte was a French military and political leader during the latter stages of the French Revolution.As Napoleon I, he was Emperor of the French from 1804 to 1815...
, following a design of English
England
England is a country that is part of the United Kingdom. It shares land borders with Scotland to the north and Wales to the west; the Irish Sea is to the north west, the Celtic Sea to the south west, with the North Sea to the east and the English Channel to the south separating it from continental...
manufacture. The engineers Louis-Alexandre de Cessart
Louis-Alexandre de Cessart
Louis-Alexandre de Cessart was a French road and bridge engineer.He served in the "gendarmerie de la Maison du Roi", fighting at the battles of Fontenoy and Raucoux in 1745 and 1746. In 1747 he entered the school of Jean-Rodolphe Perronet, which later became the École nationale des ponts et...
and Jacques Dillon initially conceived of a bridge which would resemble a suspended garden, with trees, banks of flowers, and benches. 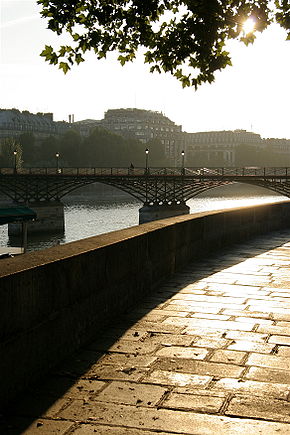 In 1976, the Inspector of Bridges and Causeways (Ponts et Chaussées) reported several deficiencies on the bridge. More specifically, he noted the damage that had been caused by two aerial bombardments sustained during World War I
World War I
World War I , which was predominantly called the World War or the Great War from its occurrence until 1939, and the First World War or World War I thereafter, was a major war centred in Europe that began on 28 July 1914 and lasted until 11 November 1918...
and World War II
World War II
World War II, or the Second World War , was a global conflict lasting from 1939 to 1945, involving most of the world's nations—including all of the great powers—eventually forming two opposing military alliances: the Allies and the Axis...
and the harm done from the multiple collisions caused by boats. The bridge would be closed to circulation in 1977 and, in 1979, suffered a 60 meter collapse after a barge rammed into it.

The present bridge was built between 1981 and 1984 "identically" according to the plans of Louis Arretche, who had decided to reduce the number of arches from nine to seven, allowing the look of the old bridge to be preserved while realigning the new structure with the Pont Neuf
Pont Neuf
The Pont Neuf is, despite its name, the oldest standing bridge across the river Seine in Paris, France. Its name, which was given to distinguish it from older bridges that were lined on both sides with houses, has remained....
. On 27 June 1984, the newly reconstructed bridge was inaugurated by Jacques Chirac
Jacques Chirac
Jacques René Chirac is a French politician who served as President of France from 1995 to 2007. He previously served as Prime Minister of France from 1974 to 1976 and from 1986 to 1988 , and as Mayor of Paris from 1977 to 1995.After completing his studies of the DEA's degree at the...
– then the mayor of Paris.

The bridge has sometimes served as a place for art exhibitions, and is today a studio en plein air for painter
Painting
Painting is the practice of applying paint, pigment, color or other medium to a surface . The application of the medium is commonly applied to the base with a brush but other objects can be used. In art, the term painting describes both the act and the result of the action. However, painting is...
s, artist
Artist
An artist is a person engaged in one or more of any of a broad spectrum of activities related to creating art, practicing the arts and/or demonstrating an art. The common usage in both everyday speech and academic discourse is a practitioner in the visual arts only...
s and photographers who are drawn to its unique point of view. The Pont des Arts is also frequently a spot for picnic
Picnic
In contemporary usage, a picnic can be defined simply as a pleasure excursion at which a meal is eaten outdoors , ideally taking place in a beautiful landscape such as a park, beside a lake or with an interesting view and possibly at a public event such as before an open air theatre performance,...
s during the summer.

The Argentinian writer, Julio Cortázar, talks about this bridge in his book "Rayuela". When Horacio Oliveira goes with the pythia and this tells him that the bridge for La Maga is the "Ponts des Arts".

Nowadays the bridge has become a hotspot for couples who attach a padlock to the railing and throw the key into the river below.

Due to its recognizable nature, the bridge has been featured in numerous films and television shows:

"I am standing on the Pont des Arts in Paris. On the one side of the Seine is the harmonious, reasonable facade of the Institute of France, built as a college in about 1670. On the other bank is the Louvre, built continuously from the Middle Ages to the nineteenth century: classical architecture at its most splendid and assured. Just visible upstream is the Cathedral of Notre Dame --not perhaps the most lovable of cathedrals, but the most rigorously intellectual façade in the whole of Gothic art. [...]

What is civilisation? I do not know. I can't define it in abstract terms --yet. But I think I can recognise it when I see it: and I am looking at it now."