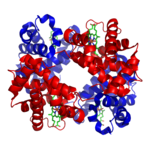 PolyHeme is a temporary oxygen
Oxygen
Oxygen is the element with atomic number 8 and represented by the symbol O. Its name derives from the Greek roots ὀξύς and -γενής , because at the time of naming, it was mistakenly thought that all acids required oxygen in their composition...
-carrying blood substitute
Blood substitute
A blood substitute is a substance used to mimic and fulfill some functions of biological blood, usually in the oxygen-carrying sense...
made from human hemoglobin
Hemoglobin
Hemoglobin is the iron-containing oxygen-transport metalloprotein in the red blood cells of all vertebrates, with the exception of the fish family Channichthyidae, as well as the tissues of some invertebrates...
that is currently in development for emergency treatment of trauma
Physical trauma
Trauma refers to "a body wound or shock produced by sudden physical injury, as from violence or accident." It can also be described as "a physical wound or injury, such as a fracture or blow." Major trauma can result in secondary complications such as circulatory shock, respiratory failure and death...
situations where large volumes of blood
Blood
Blood is a specialized bodily fluid in animals that delivers necessary substances such as nutrients and oxygen to the cells and transports metabolic waste products away from those same cells....
are lost, with emphasis on situations where fresh blood for transfusion is not readily available. It originally began as a military
Military
A military is an organization authorized by its greater society to use lethal force, usually including use of weapons, in defending its country by combating actual or perceived threats. The military may have additional functions of use to its greater society, such as advancing a political agenda e.g...
project following the Vietnam war
Vietnam War
The Vietnam War was a Cold War-era military conflict that occurred in Vietnam, Laos, and Cambodia from 1 November 1955 to the fall of Saigon on 30 April 1975. This war followed the First Indochina War and was fought between North Vietnam, supported by its communist allies, and the government of...
and is currently being developed by Northfield Laboratories, Inc.

PolyHeme is a solution of human hemoglobin extracted from red blood cells that has been modified using a multi-step polymerization process. The purified hemoglobin is associated into tetramers and is incorporated into an electrolyte solution. The polymerization of the hemoglobin represents the critical advance in the development of artificial blood. Previous attempts using non-polymerized hemoglobin caused vasoconstriction
Vasoconstriction
Vasoconstriction is the narrowing of the blood vessels resulting from contraction of the muscular wall of the vessels, particularly the large arteries, small arterioles and veins. The process is the opposite of vasodilation, the widening of blood vessels. The process is particularly important in...
. Also, filtration of free globin chains by the kidney
Kidney
The kidneys, organs with several functions, serve essential regulatory roles in most animals, including vertebrates and some invertebrates. They are essential in the urinary system and also serve homeostatic functions such as the regulation of electrolytes, maintenance of acid–base balance, and...
causes renal failure. The company currently uses expired human blood from which the hemoglobin is extracted and purified. The hemoglobin molecule is then pyridoxylated to raise the P50. Subsequently, this hemoglobin is polymerized with glutaraldehyde.

Because PolyHeme is a hemoglobin solution and does not contain intact red blood cells which express ABO antigens, cross-matching of the product or typing of the patient is not necessary. This is required with units of red blood cells. PolyHeme is manufactured from human red blood cells that have been tested similar to red blood cell units. In addition, during the manufacturing process steps are performed that would reduce the risk of viral infection. It has a shelf life of over twelve months. PolyHeme can be stored at room temperature, versus red blood cell units which require refrigeration. The storage conditions and lack of need for compatibility testing would make PolyHeme advantageous in emergency situations as well as in treating combat casualties. Another advantage is its acceptance by some patients seeking bloodless medical care
Bloodless surgery
Bloodless surgery is a term that was popularized at the beginning of the 20th century by the practice of an internationally famous orthopedic surgeon, Adolf Lorenz, who was known as "the bloodless surgeon of Vienna." This expression reflected Lorenz's methods for treating patients with noninvasive...
. Of note, not all patients who object to blood transfusions will accept PolyHeme as the hemoglobin is derived from human blood. PolyHeme only provides oxygen carrying capacity and does not provide coagulation/clotting factors or platelets.

PolyHeme has several disadvantages which it shares with all current generation haemoglobin solutions. Firstly it has an intravascular dwell time significantly shorter than 120 days dwell time of transfused red blood cells. The result is that the effects of infusion are temporary and it may be necessary to transfuse red blood cells after PolyHeme is excreted. Secondly it interferes with many laboratory tests, especially those measured spectrophotometrically. Finally, it has been associated with an increased risk of myocardial infarction (heart attack) in patients receiving it during the Phase III trial.

On May 23, 2006, Northfield Labs selected Jacobs Engineering Group
Jacobs Engineering Group
Jacobs Engineering Group Inc., a publicly traded company with over 50,000 employees and 2010 revenues of nearly $10 billion, provides technical, professional, and construction services globally. Headquartered in Pasadena, California, it was founded in 1947 by Dr. Joseph J. Jacobs. Jacobs offers...
Inc. to provide engineering services for a new biological manufacturing facility. The facility will consist of commercial manufacturing space in a facility adjacent to Northfield Laboratories' existing pilot plant operations in Mt. Prospect, IL
Mount Prospect, Illinois
Mount Prospect is a village in Elk Grove and Wheeling Townships in Cook County, Illinois, about northwest of downtown Chicago. As of the 2010 census, the village had a total population of 54,167.-Geography:...
and will include production modules, laboratories, warehousing, utility support, and offices.

Additionally, on June 16, 2006, Northfield Labs announced it signed an agreement to purchase a 106000 square feet (9,847.7 m²) property it had been leasing to be used as the first planned commercial facility to manufacture PolyHeme. The Mt. Prospect, IL facility was purchased for $6.7 million and is expected to be capable of producing at least 100,000 units of PolyHeme annually.

The testing was completed at more than 25 Level I trauma centers in the United States under a Food and Drug Administration
Food and Drug Administration
The Food and Drug Administration is an agency of the United States Department of Health and Human Services, one of the United States federal executive departments...
special category (21CFR 50.24) in 1996 that allows its use without patient consent
Informed consent
Informed consent is a phrase often used in law to indicate that the consent a person gives meets certain minimum standards. As a literal matter, in the absence of fraud, it is redundant. An informed consent can be said to have been given based upon a clear appreciation and understanding of the...
in special circumstances. PolyHeme was the 15th such experiment allowed by the FDA. Although Northfield Laboratories came under scrutiny for this trial, enrollment of the 720 patient trial was completed on July 31, 2006. "Between 2003 and 2006, 720 trauma victims at thirty-two U.S. medical centers were "enrolled" in a research study to determine the efficacy of Polyheme, a patented blood substitute manufactured by Northfield Laboratories". http://books.google.com/books?id=xKr0VI98YhQC&pg=PT285&lpg=PT285&dq=martha+milete&source=bl&ots=gXHtac_9dO&sig=GrTIrK5ztW_chzzH_6hRU8IfP2E&hl=en&ei=-nzKTvzqL5TisQKfquhb&sa=X&oi=book_result&ct=result&resnum=3&ved=0CCwQ6AEwAg#v=onepage&q=martha%20milete&f=false
The controversy arose from the fact that the participants in this study were incapable of giving their consent due to the nature of their injuries. The only way to opt out from the study was by wearing a special bracelet prior to needing emergency care (the bracelet can be requested by calling 717-531-5829). Even though this practice is sanctioned by the FDA as necessary emergency research, patients’ rights groups protested the study.

Lists of the participating hospitals can be found at http://abcnews.go.com/WNT/story?id=2166058&page=1&WNT=true and http://www.clinicaltrials.gov/ct/show/NCT00076648?order=1.

In a financial analysts and investors meeting on August 8, 2006 in New York
New York
New York is a state in the Northeastern region of the United States. It is the nation's third most populous state. New York is bordered by New Jersey and Pennsylvania to the south, and by Connecticut, Massachusetts and Vermont to the east...
, Northfield Labs revealed that it had just sent in an application to the FDA for Fast Track
FDA Fast Track Development Program
The FDA Fast Track Development Program is a designation of the United States Food and Drug Administration that accelerates the approval of investigational new drugs undergoing clinical trials with the goal review time of 60 days...
designation of PolyHeme and that by law, the FDA was supposed to provide a response within two months. If a Fast Track designation is approved, Northfield planned to request for Priority Review when it submit its Biologic License Application
Biologic License Application
As defined by the US FDA, a Biologic License Application is: Biological products are approved for marketing under the provisions of the Public Health Service Act. The Act requires a firm who manufactures a biologic for sale in interstate commerce to hold a license for the product...
(BLA) sometime in the first half of the year 2007. Fast Track is a feature of the FDA Modernization Act of 1997
Food and Drug Administration Modernization Act of 1997
The United States Food and Drug Administration Modernization Act of 1997 amended the Federal Food, Drug, and Cosmetic Act. This act is related to the regulation of food, drugs, devices, and biological products by the FDA. These changes were made in order to recognize the changes in the way the...
and is intended to facilitate the development and expedite the review of products intended for the treatment of serious or life-threatening conditions and which demonstrate the potential to address an unmet medical need for such a condition. It was also re-stated that the company expected to report top-line results of PolyHeme's Phase III study in the fall of 2006.

In a press release on October 10, 2006, it was released that Northfield Labs and the FDA had both agreed to defer the Fast Track designation until the availability of the top-line result in the fall. Fast Track designation was deferred because the FDA needs to know not just the product, but also the indication for which the product will be used. The indication was yet to be determined because the PolyHeme Phase III trial had two primary endpoints of superiority and non-inferiority. And until the release of the top-line result, whether either, both or none of the endpoints were met is unknown.

The Phase III trial was designed as an "active-control dual superiority-noninferiority trial comparing the survival of PolyHeme patients to those who received standard treatment (salt water plus blood)". On December 19, 2006, Northfield Labs released preliminary results of the trial, and the mortality data was disappointing: 13.2 percent of patients receiving PolyHeme died versus 9.6 percent among the control group. This news led to Northfield shares plummeting more than 50%. However, the company remains optimistic, noting that of the 712 randomized treatment patients, 20% of the PolyHeme group and 15% of the control group were protocol violations, leaving a valid total of 586 patients. Northfield is currently re-evaluating the study database to determine if any additional statistical errors are present. They expect to announce any release of the final results only after error corrections are complete. Additional safety data is also expected from the CRO in four to six weeks from the December 19 announcement.

Results of the Phase III trial were published in the Journal of the American College of Surgeons January 2009 (electronic publication November 2008). There were claimed to be no significant difference in outcomes between the conventionally-resuscitated group and the Polyheme-treated group. Concern about coronary ischaemia was addressed, and the uncomfortable fact that 3% of the polyheme group were reported to suffer myocardial infarction compared to only 1% in the control group was softened by a claim that a blinded committee of experts were unable to discern a difference between the groups. Investigators concluded that 'although there were more adverse events in the Polyheme group, the benefit-to-risk ratio of Polyheme is favorable when blood is needed but not available'.