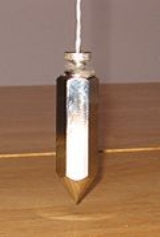 A plumb-bob or a plummet is a weight, usually with a pointed tip on the bottom, that is suspended from a string and used as a vertical reference line, or plumb-line.

The instrument
Measuring instrument
In the physical sciences, quality assurance, and engineering, measurement is the activity of obtaining and comparing physical quantities of real-world objects and events. Established standard objects and events are used as units, and the process of measurement gives a number relating the item...
has been used since at least the time of ancient Egypt
Ancient Egypt
Ancient Egypt was an ancient civilization of Northeastern Africa, concentrated along the lower reaches of the Nile River in what is now the modern country of Egypt. Egyptian civilization coalesced around 3150 BC with the political unification of Upper and Lower Egypt under the first pharaoh...
to ensure that constructions are "plumb", or vertical. It is also used in surveying
Surveying
See Also: Public Land Survey SystemSurveying or land surveying is the technique, profession, and science of accurately determining the terrestrial or three-dimensional position of points and the distances and angles between them...
to establish the nadir
Nadir
The nadir is the direction pointing directly below a particular location; that is, it is one of two vertical directions at a specified location, orthogonal to a horizontal flat surface there. Since the concept of being below is itself somewhat vague, scientists define the nadir in more rigorous...
with respect to gravity of a point in space. They are used with a variety of instruments (including levels, theodolite
Theodolite
A theodolite is a precision instrument for measuring angles in the horizontal and vertical planes. Theodolites are mainly used for surveying applications, and have been adapted for specialized purposes in fields like metrology and rocket launch technology...
s, and steel tapes
Tape measure
A tape measure or measuring tape is a flexible form of ruler. It consists of a ribbon of cloth, plastic, fiber glass, or metal strip with linear-measurement markings. It is a common measuring tool. Its flexibility allows for a measure of great length to be easily carried in pocket or toolkit and...
) to set the instrument exactly over a fixed survey marker
Survey marker
Survey markers, also called survey marks, and sometimes geodetic marks, are objects placed to mark key survey points on the Earth's surface. They are used in geodetic and land surveying. Informally, such marks are referred to as benchmarks, although strictly speaking the term "benchmark" is...
, or to transcribe positions onto the ground for placing a marker.

The "plumb" in "plumb-bob" comes from the fact that such tools were originally made of lead
Lead
Lead is a main-group element in the carbon group with the symbol Pb and atomic number 82. Lead is a soft, malleable poor metal. It is also counted as one of the heavy metals. Metallic lead has a bluish-white color after being freshly cut, but it soon tarnishes to a dull grayish color when exposed...
(Latin
Latin
Latin is an Italic language originally spoken in Latium and Ancient Rome. It, along with most European languages, is a descendant of the ancient Proto-Indo-European language. Although it is considered a dead language, a number of scholars and members of the Christian clergy speak it fluently, and...
plumbum, probably through French plomb). The adjective "plumb" developed by extension.

Up until the modern age, on most tall structures, plumb-bobs were used to provide vertical datum lines for the building measurements. A section of the scaffolding would hold a plumb line that was centered over a datum mark on the floor. As the building proceeded upwards the plumb line would also be taken higher, still centered on the datum. Many cathedral spire
Spire
A spire is a tapering conical or pyramidal structure on the top of a building, particularly a church tower. Etymologically, the word is derived from the Old English word spir, meaning a sprout, shoot, or stalk of grass....
s, domes and tower
Tower
A tower is a tall structure, usually taller than it is wide, often by a significant margin. Towers are distinguished from masts by their lack of guy-wires....
s still have brass datum marks inlaid into their floors, that signify the center of the structure above.

Although a plumb-bob and line alone can only determine a vertical, if mounted on a suitable scale the instrument may also be used as an inclinometer
Inclinometer
An inclinometer or clinometer is an instrument for measuring angles of slope , elevation or depression of an object with respect to gravity...
to measure angles to the vertical.

The early skyscrapers used heavy plumb-bobs hung on wire in their elevator shafts. The weight would hang in a container of oil to dampen any swinging movement, functioning as a shock absorber
Shock absorber
A shock absorber is a mechanical device designed to smooth out or damp shock impulse, and dissipate kinetic energy. It is a type of dashpot.-Nomenclature:...
.


Determining center of gravity of an irregular shape

Students of figure drawing
Figure drawing
In art, a figure drawing is a study of the human form in its various shapes and body postures - sitting, standing or even sleeping. It is a study or stylized depiction of the human form, with the line and form of the human figure as the primary objective, rather than the subject person. It is a...
will also make use of a plumb line to find the vertical axis through the center of gravity
Center of gravity
In physics, a center of gravity of a material body is a point that may be used for a summary description of gravitational interactions. In a uniform gravitational field, the center of mass serves as the center of gravity...
of their subject and lay it down on paper as a point of reference
Frame of reference
A frame of reference in physics, may refer to a coordinate system or set of axes within which to measure the position, orientation, and other properties of objects in it, or it may refer to an observational reference frame tied to the state of motion of an observer.It may also refer to both an...
. The device used may be purpose-made plumb lines, or simply makeshift devices made from a piece of string and a weighted object, such as a metal washer
Washer (hardware)
A washer is a thin plate with a hole that is normally used to distribute the load of a threaded fastener, such as a screw or nut. Other uses are as a spacer, spring , wear pad, preload indicating device, locking device, and to reduce vibration...
. This plumb line is important for lining up anatomical geometries and visualizing the subject's center of balance
Center of balance
Center of balance is a point with respect to which the object in question is balanced with respect to applied forces. In particular areas the term may have specific meaning and special discussion, and may refer to one of the following definitions:...
.