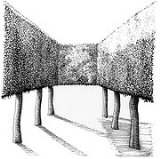 Encyclopedia
Pleaching is a technique to weave the branches of trees into a hedge or to form a quincunx
Quincunx
A quincunx is a geometric pattern consisting of five points arranged in a cross, that is five coplanar points, four of them forming a square or rectangle and a fifth at its center...
. Commonly, deciduous
Deciduous
Deciduous means "falling off at maturity" or "tending to fall off", and is typically used in reference to trees or shrubs that lose their leaves seasonally, and to the shedding of other plant structures such as petals after flowering or fruit when ripe...
trees are planted in lines, then pleached to form a flat plane on clear stems above the ground level. Branches are woven together and lightly tied. Branches in close contact may grow together, due to a natural phenomenon called inosculation
Inosculation
Inosculation is a natural phenomenon in which trunks or branches of two trees grow together. When occurring in plants, it is biologically very similar to grafting....
, a natural graft.

Pleaching or plashing (an early synonym) was common in gardens from late medieval times to the early eighteenth century, to create shaded paths, or to create a living fence out of trees or shrubs.

In hedge laying
Hedge laying
Hedge laying is a country skill, typically found in the United Kingdom and Ireland, which, through the creation and maintenance of hedges, achieves the following:* the formation of livestock-proof barriers;...
, this technique can be used to improve or renew a quickset hedge to form a thick, impenetrable barrier suitable for enclosing animals. It keeps the lower parts of a hedge thick and dense, and was traditionally done every few years.
The stems of hedging plants are slashed through to the centre or more then bent over, and interwoven. The plants rapidly regrow, forming a dense barrier along its entire length.

In garden design, the same technique has produced elaborate works of art, neatly shaded walks and allée
Allee
Allee may refer to:* Alfred Allee , U.S. sheriff.* J. Frank Allee , U.S. merchant and politician.* Warder Clyde Allee , U.S. ecologist, discoverer of the Allee effect.* Verna Allee , U.S. business consultant....
s. This was not much seen in the American colonies, where labor-intensive aesthetic have not been features of gardening: "Because of the time needed in caring for pleached allée
Avenue (landscape)
__notoc__In landscaping, an avenue or allée is traditionally a straight route with a line of trees or large shrubs running along each, which is used, as its French source venir indicates, to emphasize the "coming to," or arrival at a landscape or architectural feature...
s," Donald Wyman noted, "they are but infrequently seen in American gardens, but are frequently observed in Europe."

After the second quarter of the eighteenth century, the technique withdrew to the kitchen garden, and the word dropped out of English usage, until Sir Walter Scott reintroduced it for local colour, in The Fortunes of Nigel (1822). After the middle of the nineteenth century, English landowners were once again planting avenues, often shading the sweeping curves of a drive, but sometimes straight allées of pleached limes, as Rowland Egerton's at Arley Hall
Arley Hall
Arley Hall is a country house in the village of Arley, Cheshire, England, about south of Lymm and north of Northwich. It is home to the owner, Viscount Ashbrook and his family. The house is a Grade II* listed building, as is its adjacent chapel. Formal gardens to the southwest of the hall...
, Cheshire, which survive in splendidly controlled form.

In Much Ado About Nothing
Much Ado About Nothing
Much Ado About Nothing is a comedy written by William Shakespeare about two pairs of lovers, Benedick and Beatrice, and Claudio and Hero....
, Antonio reports (I.ii.8ff) that the Prince and Count Claudio were "walking in a thick pleached alley in my orchard." A modern version of such free-standing pleached fruit trees is sometimes called a "Belgian fence": young fruit trees pruned to four or six wide Y-shaped crotches, in the candelabra-form espalier
Espalier
Espalier is the horticultural and ancient agricultural practice of controlling woody plant growth by pruning and tying branches so that they grow into a flat plane, frequently in formal patterns, against a structure such as a wall, fence, or trellis, and also plants which have been shaped in this...
called a palmette verrier, are planted at close intervals, about two metres apart, and their branches are bound together to makes a diagonal lattice, a regimen of severe seasonal pruning
Pruning
Pruning is a horticultural practice involving the selective removal of parts of a plant, such as branches, buds, or roots. Reasons to prune plants include deadwood removal, shaping , improving or maintaining health, reducing risk from falling branches, preparing nursery specimens for...
; lashing of young growth to straight sticks and binding the joints repeat the pattern.

In the gardens of André Le Nôtre
André Le Nôtre
André Le Nôtre was a French landscape architect and the principal gardener of King Louis XIV of France...
and his followers, pleaching kept the vistas of straight rides through woodland cleanly bordered. At Studley Royal, Yorkshire, the avenues began to be pleached once again, as an experiment in restoration, in 1972.