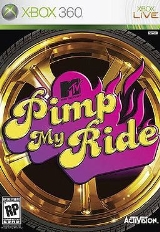 Encyclopedia
Pimp My Ride is a simulation/racing game published by Activision
Activision
Activision is an American publisher, majority owned by French conglomerate Vivendi SA. Its current CEO is Robert Kotick. It was founded on October 1, 1979 and was the world's first independent developer and distributor of video games for gaming consoles...
. This game is based on the popular MTV
MTV
MTV, formerly an initialism of Music Television, is an American network based in New York City that launched on August 1, 1981. The original purpose of the channel was to play music videos guided by on-air hosts known as VJs....
show
Pimp My Ride
Pimp My Ride is a TV show produced by MTV. Each episode consists of taking one car in poor condition and restoring it and customizing it.The original United States version was hosted by rapper Xzibit...
. It was released in 2006 for the Wii
Wii
The Wii is a home video game console released by Nintendo on November 19, 2006. As a seventh-generation console, the Wii primarily competes with Microsoft's Xbox 360 and Sony's PlayStation 3. Nintendo states that its console targets a broader demographic than that of the two others...
, Xbox 360
Xbox 360
The Xbox 360 is the second video game console produced by Microsoft and the successor to the Xbox. The Xbox 360 competes with Sony's PlayStation 3 and Nintendo's Wii as part of the seventh generation of video game consoles...
, PlayStation Portable
PlayStation Portable
The is a handheld game console manufactured and marketed by Sony Corporation Development of the console was announced during E3 2003, and it was unveiled on , 2004, at a Sony press conference before E3 2004...
and PlayStation 2
PlayStation 2
The PlayStation 2 is a sixth-generation video game console manufactured by Sony as part of the PlayStation series. Its development was announced in March 1999 and it was first released on March 4, 2000, in Japan...
consoles. In the game, players are challenged to pimp out their friends' cars by Xzibit
Xzibit
Alvin Nathaniel Joiner , better known by his stage name Xzibit , is an American rapper, actor, and television host. He is known as the host of the MTV show Pimp My Ride, which brought him mainstream success...
, transforming something old and rusty into something worthy of displaying on the streets. Cars can be redesigned from bumper to bumper and it will be players’ responsibilities to capture the styles, likes and interests of their clients.

Alex Navarro of GameSpot described the PSP version as having a "nauseatingly choppy frame rate" and commented that the game crashed "on a semi-regular basis... thus corrupting or killing your save file", summing up by saying "There is no version of Pimp My Ride worth recommending to anyone, but the PSP version is definitely the one that should be most actively avoided".