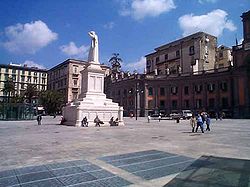 Piazza Dante is a large public square in Naples
Naples
Naples is a city in Southern Italy, situated on the country's west coast by the Gulf of Naples. Lying between two notable volcanic regions, Mount Vesuvius and the Phlegraean Fields, it is the capital of the region of Campania and of the province of Naples...
, Italy
Italy
Italy , officially the Italian Republic languages]] under the European Charter for Regional or Minority Languages. In each of these, Italy's official name is as follows:;;;;;;;;), is a unitary parliamentary republic in South-Central Europe. To the north it borders France, Switzerland, Austria and...
, named after the poet Dante Alighieri
Dante Alighieri
Durante degli Alighieri, mononymously referred to as Dante , was an Italian poet, prose writer, literary theorist, moral philosopher, and political thinker. He is best known for the monumental epic poem La commedia, later named La divina commedia ...
. The square is dominated by a 19th-century statue of the poet, sculpted by Tito Angelini.

Originally, the square was called Largo del Mercatello (Market Square). In 1765, it was rechristened Foro Carolina, after the wife of the King of Naples
Ferdinand I of the Two Sicilies
Ferdinand I reigned variously over Naples, Sicily, and the Two Sicilies from 1759 until his death. He was the third son of King Charles III of Spain by his wife Maria Amalia of Saxony. On 10 August 1759, Charles succeeded his elder brother, Ferdinand VI, as King Charles III of Spain...
. At that time, the square was modified by architect Luigi Vanvitelli
Luigi Vanvitelli
Luigi Vanvitelli was an Italian engineer and architect. The most prominent 18th-century architect of Italy, he practiced a sober classicizing academic Late Baroque style that made an easy transition to Neoclassicism.-Biography:Vanvitelli was born at Naples, the son of a Dutch painter of land and...
. Modifications included the construction of an ornate semicircular arrangement of columns and statues that now look down on the square. They now mark the western side of a boarding school
Boarding school
A boarding school is a school where some or all pupils study and live during the school year with their fellow students and possibly teachers and/or administrators. The word 'boarding' is used in the sense of "bed and board," i.e., lodging and meals...
named for Victor Emanuel II. Vanvitelli, with his changes, essentially converted what had been the rear of a large, pre-existing and ancient monastery into the front of the "new" structure.
The source of this article is wikipedia, the free encyclopedia.  The text of this article is licensed under the GFDL.