Encyclopedia
The Piano Concerto No. 3 in D minor, Op. 30, composed in 1909 by Sergei Rachmaninoff
Sergei Rachmaninoff
Sergei Vasilievich Rachmaninoff was a Russian composer, pianist, and conductor. Rachmaninoff is widely considered one of the finest pianists of his day and, as a composer, one of the last great representatives of Romanticism in Russian classical music...
(colloquially known as "Rach 3") is famous for its technical and musical demands on the performer. It has the reputation of being one of the most technically challenging piano concertos in the standard classical
Classical music
Classical music is the art music produced in, or rooted in, the traditions of Western liturgical and secular music, encompassing a broad period from roughly the 11th century to present times...
repertoire.

Following the form of a standard concerto
Concerto
A concerto is a musical work usually composed in three parts or movements, in which one solo instrument is accompanied by an orchestra.The etymology is uncertain, but the word seems to have originated from the conjunction of the two Latin words...
, the piece is in three movements:

Rachmaninoff authorized several cuts in the score, to be made at the performer's discretion. These cuts, particularly in the second and third movements, were commonly taken in performance and recordings during the initial decades following the Concerto's publication. More recently, it has become commonplace to perform the concerto without cuts. A typical performance of the complete concerto lasts about forty minutes. 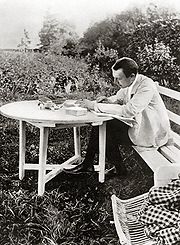 Rachmaninoff composed the concerto in the peaceful setting of his family's country estate, Ivanovka, completing it on September 23, 1909. Contemporary with this work are his First Piano Sonata
Piano Sonata No. 1 (Rachmaninoff)
Piano Sonata No. 1, Op. 28, is a piano sonata in D minor by Sergei Rachmaninoff, completed in 1908. It is the first of three "Dresden pieces", along with Symphony No. 2 and part of an opera, which were composed in the quiet city of Dresden, Germany...
and his tone poem
Symphonic poem
A symphonic poem or tone poem is a piece of orchestral music in a single continuous section in which the content of a poem, a story or novel, a painting, a landscape or another source is illustrated or evoked. The term was first applied by Hungarian composer Franz Liszt to his 13 works in this vein...
The Isle of the Dead
Isle of the Dead (Rachmaninoff)
Isle of the Dead, Op. 29, is a symphonic poem composed by Sergei Rachmaninoff. Rachmaninoff was inspired by Arnold Böcklin's painting, Isle of the Dead, which he saw in Paris in 1907. He concluded the composition while staying in Dresden in 1908...
.

The concerto is respected, even feared, by many pianists. Josef Hofmann, the pianist to whom the work is dedicated, never publicly performed it, saying that it "wasn't for" him. And Gary Graffman
Gary Graffman
Gary Graffman is an American classical pianist, teacher of piano and music administrator.Graffman was born in New York City to Russian-Jewish parents. Having started piano at age 3, Graffman entered the Curtis Institute of Music at age 7 in 1936 as a piano student of Isabelle Vengerova...
lamented he had not learned this concerto as a student, when he was "still too young to know fear".

Due to time constraints, Rachmaninoff could not practice the piece while in Russia. Instead, he practiced it on a silent keyboard that he brought with him while en route
Ocean liner
An ocean liner is a ship designed to transport people from one seaport to another along regular long-distance maritime routes according to a schedule. Liners may also carry cargo or mail, and may sometimes be used for other purposes .Cargo vessels running to a schedule are sometimes referred to as...
to the United States.

The concerto was first performed on November 28, 1909 by Rachmaninoff himself with the now-defunct New York Symphony Society with Walter Damrosch conducting
Conducting
Conducting is the art of directing a musical performance by way of visible gestures. The primary duties of the conductor are to unify performers, set the tempo, execute clear preparations and beats, and to listen critically and shape the sound of the ensemble...
, at the New Theater (later rechristened the Century Theater). It received a second performance under Gustav Mahler
Gustav Mahler
Gustav Mahler was a late-Romantic Austrian composer and one of the leading conductors of his generation. He was born in the village of Kalischt, Bohemia, in what was then Austria-Hungary, now Kaliště in the Czech Republic...
several weeks later, an "experience Rachmaninoff treasured." The manuscript was first published in 1910 by Gutheil
Gutheil
Gutheil is a German and Jewish surname of:* Marie Gutheil-Schoder, née Schoder , German soprano, wife of Gustav Gutheil* Emil Arthur Gutheil , Polish-American psychiatrist , German jurist...
. The first performance in England
England
England is a country that is part of the United Kingdom. It shares land borders with Scotland to the north and Wales to the west; the Irish Sea is to the north west, the Celtic Sea to the south west, with the North Sea to the east and the English Channel to the south separating it from continental...
was given by Rachmaninoff in October 1911 at Liverpool
Liverpool
Liverpool is a city and metropolitan borough of Merseyside, England, along the eastern side of the Mersey Estuary. It was founded as a borough in 1207 and was granted city status in 1880...
with conductor Simon Speilman, and he also played it in November 1911 at the Queen's Hall
Queen's Hall
The Queen's Hall was a concert hall in Langham Place, London, opened in 1893. Designed by the architect T.E. Knightley, it had room for an audience of about 2,500 people. It became London's principal concert venue. From 1895 until 1941, it was the home of the promenade concerts founded by Robert...
, London
London
London is the capital city of :England and the :United Kingdom, the largest metropolitan area in the United Kingdom, and the largest urban zone in the European Union by most measures. Located on the River Thames, London has been a major settlement for two millennia, its history going back to its...
under Willem Mengelberg
Willem Mengelberg
Joseph Willem Mengelberg was a Dutch conductor, famous for his performances of Mahler and Strauss with the Concertgebouw Orchestra.- Biography :...
.

Rachmaninoff called te Third the favorite of his own piano concertos, stating that "I much prefer the Third, because my Second
Piano Concerto No. 2 (Rachmaninoff)
The Piano Concerto No. 2 in C minor, Op. 18, is a concerto for piano and orchestra composed by Sergei Rachmaninoff between the autumn of 1900 and April 1901. The second and third movements were first performed with the composer as soloist on 2 December 1900...
is so uncomfortable to play." Nevertheless, it was not until the 1930s and largely thanks to the advocacy of Vladimir Horowitz
Vladimir Horowitz
Vladimir Samoylovich Horowitz    was a Russian-American classical virtuoso pianist and minor composer. His technique and use of tone color and the excitement of his playing were legendary. He is widely considered one of the greatest pianists of the 20th century.-Life and early...
that the Third concerto became popular.

The concerto is scored for 2 flute
Flute
The flute is a musical instrument of the woodwind family. Unlike woodwind instruments with reeds, a flute is an aerophone or reedless wind instrument that produces its sound from the flow of air across an opening...
s, 2 oboe
Oboe
The oboe is a double reed musical instrument of the woodwind family. In English, prior to 1770, the instrument was called "hautbois" , "hoboy", or "French hoboy". The spelling "oboe" was adopted into English ca...
s, 2 clarinet
Clarinet
The clarinet is a musical instrument of woodwind type. The name derives from adding the suffix -et to the Italian word clarino , as the first clarinets had a strident tone similar to that of a trumpet. The instrument has an approximately cylindrical bore, and uses a single reed...
s, 2 bassoon
Bassoon
The bassoon is a woodwind instrument in the double reed family that typically plays music written in the bass and tenor registers, and occasionally higher. Appearing in its modern form in the 19th century, the bassoon figures prominently in orchestral, concert band and chamber music literature...
s, 4 horns, 2 trumpet
Trumpet
The trumpet is the musical instrument with the highest register in the brass family. Trumpets are among the oldest musical instruments, dating back to at least 1500 BCE. They are played by blowing air through closed lips, producing a "buzzing" sound which starts a standing wave vibration in the air...
s, 3 trombone
Trombone
The trombone is a musical instrument in the brass family. Like all brass instruments, sound is produced when the player’s vibrating lips cause the air column inside the instrument to vibrate...
s, tuba
Tuba
The tuba is the largest and lowest-pitched brass instrument. Sound is produced by vibrating or "buzzing" the lips into a large cupped mouthpiece. It is one of the most recent additions to the modern symphony orchestra, first appearing in the mid-19th century, when it largely replaced the...
, timpani
Timpani
Timpani, or kettledrums, are musical instruments in the percussion family. A type of drum, they consist of a skin called a head stretched over a large bowl traditionally made of copper. They are played by striking the head with a specialized drum stick called a timpani stick or timpani mallet...
, bass drum
Bass drum
Bass drums are percussion instruments that can vary in size and are used in several musical genres. Three major types of bass drums can be distinguished. The type usually seen or heard in orchestral, ensemble or concert band music is the orchestral, or concert bass drum . It is the largest drum of...
, snare drum
Snare drum
The snare drum or side drum is a melodic percussion instrument with strands of snares made of curled metal wire, metal cable, plastic cable, or gut cords stretched across the drumhead, typically the bottom. Pipe and tabor and some military snare drums often have a second set of snares on the bottom...
, cymbal
Cymbal
Cymbals are a common percussion instrument. Cymbals consist of thin, normally round plates of various alloys; see cymbal making for a discussion of their manufacture. The greater majority of cymbals are of indefinite pitch, although small disc-shaped cymbals based on ancient designs sound a...
s, piano
Piano
The piano is a musical instrument played by means of a keyboard. It is one of the most popular instruments in the world. Widely used in classical and jazz music for solo performances, ensemble use, chamber music and accompaniment, the piano is also very popular as an aid to composing and rehearsal...
and string
String section
The string section is the largest body of the standard orchestra and consists of bowed string instruments of the violin family.It normally comprises five sections: the first violins, the second violins, the violas, the cellos, and the double basses...
s.

The concerto is one of the main focuses of the 1996 film Shine
Shine (film)
Shine is a 1996 Australian film based on the life of pianist David Helfgott, who suffered a mental breakdown and spent years in institutions. It stars Geoffrey Rush, Lynn Redgrave, Armin Mueller-Stahl, Noah Taylor, John Gielgud, Googie Withers, Justin Braine, Sonia Todd, Nicholas Bell, Chris...
, based on the life of pianist David Helfgott
David Helfgott
David Helfgott is an Australian concert pianist. He is as well known for having schizoaffective disorder as he is for his piano playing. Helfgott's life inspired the Oscar-winning film Shine, in which he was played by Geoffrey Rush....
.