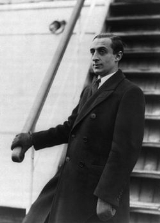 Overview
Vladimir Samoylovich Horowitz   (November 5, 1989) was a Russian-American
Russian American
Russian Americans are primarily Americans who traces their ancestry to Russia. The definition can be applied to recent Russian immigrants to the United States, as well as to settlers of 19th century Russian settlements in northwestern America which includes today's California, Alaska and...
classical
Classical music
Classical music is the art music produced in, or rooted in, the traditions of Western liturgical and secular music, encompassing a broad period from roughly the 11th century to present times...
virtuoso
Virtuoso
A virtuoso is an individual who possesses outstanding technical ability in the fine arts, at singing or playing a musical instrument. The plural form is either virtuosi or the Anglicisation, virtuosos, and the feminine form sometimes used is virtuosa...
pianist
Pianist
A pianist is a musician who plays the piano. A professional pianist can perform solo pieces, play with an ensemble or orchestra, or accompany one or more singers, solo instrumentalists, or other performers.-Choice of genres:...
and minor composer. His technique and use of tone color
Timbre
In music, timbre is the quality of a musical note or sound or tone that distinguishes different types of sound production, such as voices and musical instruments, such as string instruments, wind instruments, and percussion instruments. The physical characteristics of sound that determine the...
and the excitement of his playing were legendary. He is widely considered one of the greatest pianists of the 20th century.
Vladimir Horowitz was born in Kiev
Kiev
Kiev or Kyiv is the capital and the largest city of Ukraine, located in the north central part of the country on the Dnieper River. The population as of the 2001 census was 2,611,300. However, higher numbers have been cited in the press....
in the Russian Empire
Russian Empire
The Russian Empire was a state that existed from 1721 until the Russian Revolution of 1917. It was the successor to the Tsardom of Russia and the predecessor of the Soviet Union...
(now the capital of Ukraine
Ukraine
Ukraine is a country in Eastern Europe. It has an area of 603,628 km², making it the second largest contiguous country on the European continent, after Russia...
). There are unsubstantiated claims that Horowitz was born in Berdychiv
Berdychiv
Berdychiv is a historic city in the Zhytomyr Oblast of northern Ukraine. Serving as the administrative center of the Berdychiv Raion , the city itself is of direct oblast subordinance, and is located south of the oblast capital, Zhytomyr, at around .The current estimated population is around...
; however, his birth certificate unequivocally demonstrates Kiev as his birthplace.

Horowitz was the youngest of four children of Samuil Horowitz and Sophia Bodik, who were assimilated Jews
Jewish assimilation
Jewish assimilation refers to the cultural assimilation and social integration of Jews in their surrounding culture. Assimilation became legally possible in Europe during the Age of Enlightenment.-Background:Judaism forbids the worship of other gods...
.

I am famous, but I am not well known.

Perfection itself is imperfection.

It's better to make your own mistakes than to copy someone else's.

My future is in my past and my past is in my present. I must now make the present my future.

When I am on the stage, I'm a king. No one can interfere with me because I have something to do, and it has to be the best which is within me.

I'm a general. My soldiers are the keys, and I have to command them.

My face is my passport.

There are only three kinds of pianists; Jewish pianists, homosexual pianists, and bad pianists.