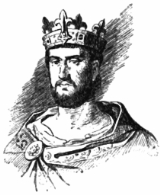 Encyclopedia
Philip I called the Amorous, was King of France from 1060 to his death. His reign, like that of most of the early Direct Capetians
House of Capet
The House of Capet, or The Direct Capetian Dynasty, , also called The House of France , or simply the Capets, which ruled the Kingdom of France from 987 to 1328, was the most senior line of the Capetian dynasty – itself a derivative dynasty from the Robertians. As rulers of France, the dynasty...
, was extraordinarily long for the time. The monarchy began a modest recovery from the low it reached in the reign of his father and he added to the royal demesne
Crown lands of France
The crown lands, crown estate, royal domain or domaine royal of France refers to the lands, fiefs and rights directly possessed by the kings of France...
the Vexin
Vexin
The Vexin is a historical county of northwestern France. It covers a verdant plateau on the right bank of the Seine comprising an area east-to-west between Pontoise and Romilly-sur-Andelle , and north-to-south between Auneuil and the Seine near Vernon...
and Bourges
Bourges
Bourges is a city in central France on the Yèvre river. It is the capital of the department of Cher and also was the capital of the former province of Berry.-History:...
.

Philip was the son of Henry I
Henry I of France
Henry I was King of France from 1031 to his death. The royal demesne of France reached its smallest size during his reign, and for this reason he is often seen as emblematic of the weakness of the early Capetians...
and Anne of Kiev
Anne of Kiev
Anne of Kiev was the queen consort of France as the wife of Henry I, and regent for her son Philip I.Her parents were Yaroslav I the Wise and princess Ingegerd Olofsdotter of Sweden....
. Unusually at the time for Western Europe, his name was of Greek
Greek language
Greek is an independent branch of the Indo-European family of languages. Native to the southern Balkans, it has the longest documented history of any Indo-European language, spanning 34 centuries of written records. Its writing system has been the Greek alphabet for the majority of its history;...
origin, being bestowed upon him by his mother. Although he was crowned king at the age of seven, until age fourteen (1066) his mother acted as regent
Regent
A regent, from the Latin regens "one who reigns", is a person selected to act as head of state because the ruler is a minor, not present, or debilitated. Currently there are only two ruling Regencies in the world, sovereign Liechtenstein and the Malaysian constitutive state of Terengganu...
, the first queen of France ever to do so. Her co-regent was Baldwin V of Flanders.

Philip first married Bertha
Bertha of Holland
Bertha of Holland was the first wife of Philip I of France, the King of France.-Biography:She was the daughter of Floris I, Count of Holland, by his wife Gertrude of Saxony. After her father died in 1061, her mother remarried to Robert I, Count of Flanders. In 1072 her stepfather concluded a...
, daughter of Floris I, Count of Holland
Floris I, Count of Holland
Floris I of Holland was Count of Holland from 1049 to 1061. He was a son of Dirk III and Othelindis....
, in 1072. Although the marriage produced the necessary heir, Philip fell in love with Bertrade de Montfort
Bertrade de Montfort
Bertrade de Montfort was the daughter of Simon I de Montfort and Agnes, Countess of Evreux. Her brother was Amaury de Montfort.-Marriages:...
, the wife of Count Fulk IV of Anjou
Fulk IV of Anjou
Fulk IV , called le Réchin, was the Count of Anjou from 1068 until his death. The nickname by which he is usually referred has no certain translation...
. He repudiated Bertha (claiming she was too fat) and married Bertrade on 15 May 1092. In 1094, he was excommunicated by Hugh, Archbishop of Lyon, for the first time; after a long silence, Pope Urban II
Pope Urban II
Pope Urban II , born Otho de Lagery , was Pope from 12 March 1088 until his death on July 29 1099...
repeated the excommunication at the Council of Clermont
Council of Clermont
The Council of Clermont was a mixed synod of ecclesiastics and laymen of the Catholic Church, which was held from November 18 to November 28, 1095 at Clermont, France...
in November 1095. Several times the ban was lifted as Philip promised to part with Bertrade, but he always returned to her, and after 1104, the ban was not repeated. In France, the king was opposed by Bishop Ivo of Chartres
Ivo of Chartres
Saint Ivo ' of Chartres was the Bishop of Chartres from 1090 until his death and an important canon lawyer during the Investiture Crisis....
, a famous jurist.

Philip appointed Alberic first Constable of France
Constable of France
The Constable of France , as the First Officer of the Crown, was one of the original five Great Officers of the Crown of France and Commander in Chief of the army. He, theoretically, as Lieutenant-general of the King, outranked all the nobles and was second-in-command only to the King...
in 1060. A great part of his reign, like his father's, was spent putting down revolts by his power-hungry vassals. In 1077, he made peace with William the Conqueror, who gave up attempting the conquest of Brittany
Brittany
Brittany is a cultural and administrative region in the north-west of France. Previously a kingdom and then a duchy, Brittany was united to the Kingdom of France in 1532 as a province. Brittany has also been referred to as Less, Lesser or Little Britain...
. In 1082, Philip I expanded his demesne with the annexation of the Vexin. Then in 1100, he took control of Bourges.

It was at the aforementioned Council of Clermont that the First Crusade
First Crusade
The First Crusade was a military expedition by Western Christianity to regain the Holy Lands taken in the Muslim conquest of the Levant, ultimately resulting in the recapture of Jerusalem...
was launched. Philip at first did not personally support it because of his conflict with Urban II. The pope would not have allowed him to participate anyway, as he had reaffirmed Philip's excommunication at the said council. Philip's brother Hugh of Vermandois
Hugh of Vermandois
Hugh I , called Magnus or the Great, was a younger son of Henry I of France and Anne of Kiev and younger brother of Philip I. He was in his own right Count of Vermandois, but an ineffectual leader and soldier, great only in his boasting...
, however, was a major participant. 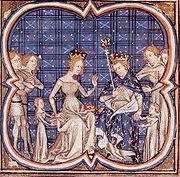 Philip's children with Bertha were:

Philip's children with Bertrade were: