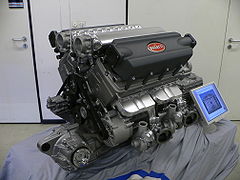 It differs from a diesel engine
Diesel engine
A diesel engine is an internal combustion engine that uses the heat of compression to initiate ignition to burn the fuel, which is injected into the combustion chamber...
in the method of mixing the fuel and air, and in using spark plug
Spark plug
A spark plug is an electrical device that fits into the cylinder head of some internal combustion engines and ignites compressed fuels such as aerosol, gasoline, ethanol, and liquefied petroleum gas by means of an electric spark.Spark plugs have an insulated central electrode which is connected by...
s to initiate the combustion process. In a diesel engine, only air is compressed (and therefore heated), and the fuel is injected into very hot air at the end of the compression stroke, and self-ignites. In a petrol engine, the fuel and air are usually pre-mixed before compression (although some modern petrol engines now use cylinder-direct petrol injection).

The pre-mixing was formerly done in a carburetor
Carburetor
A carburetor , carburettor, or carburetter is a device that blends air and fuel for an internal combustion engine. It is sometimes shortened to carb in North America and the United Kingdom....
, but now (except in the smallest engines) it is done by electronically controlled fuel injection
Fuel injection
Fuel injection is a system for admitting fuel into an internal combustion engine. It has become the primary fuel delivery system used in automotive petrol engines, having almost completely replaced carburetors in the late 1980s....
. Petrol engines run at higher speeds than diesels, partially due to their lighter pistons, con rods and crankshaft (as a result of lower compression ratios) and due to petrol burning faster than diesel. However the lower compression ratios of a petrol engine give a lower efficiency than a diesel engine.

Petrol engines have many applications, including:

Petrol engines may run on the four-stroke cycle or the two-stroke cycle. For details of working cycles see:

Common cylinder arrangements are from 1 to 6 cylinders in-line
Straight engine
Usually found in four- and six-cylinder configurations, the straight engine, or inline engine is an internal-combustion engine with all cylinders aligned in one row, with no offset...
or from 2 to 16 cylinders in V-formation
V engine
A V engine, or Vee engine is a common configuration for an internal combustion engine. The cylinders and pistons are aligned, in two separate planes or 'banks', so that they appear to be in a "V" when viewed along the axis of the crankshaft...
. Flat engines
Flat engine
A flat engine is an internal combustion engine with multiple pistons that move in a horizontal plane. Typically, the layout has cylinders arranged in two banks on either side of a single crankshaft and is sometimes known as the boxer, or horizontally opposed engine. The concept was patented in 1896...
– like a V design flattened out – are common in small airplanes and motorcycles and were a hallmark of Volkswagen
Volkswagen
Volkswagen is a German automobile manufacturer and is the original and biggest-selling marque of the Volkswagen Group, which now also owns the Audi, Bentley, Bugatti, Lamborghini, SEAT, and Škoda marques and the truck manufacturer Scania.Volkswagen means "people's car" in German, where it is...
automobiles into the 1990s. Flat 6s
Flat-6
A flat-6 or horizontally opposed-6 is a flat engine with six cylinders arranged horizontally in two banks of three cylinders on each side of a central crankcase...
are still used in many modern Porsches
Porsche
Porsche Automobil Holding SE, usually shortened to Porsche SE a Societas Europaea or European Public Company, is a German based holding company with investments in the automotive industry....
, as well as Subarus
Subaru
; is the automobile manufacturing division of Japanese transportation conglomerate Fuji Heavy Industries .Subaru is internationally known for their use of the boxer engine layout popularized in cars by the Volkswagen Beetle and Porsche 911, in most of their vehicles above 1500 cc as well as...
. Many flat engines are air-cooled. Less common, but notable in vehicles designed for high speeds is the W formation, similar to having 2 V engines side by side. Alternatives include rotary
Rotary engine
The rotary engine was an early type of internal-combustion engine, usually designed with an odd number of cylinders per row in a radial configuration, in which the crankshaft remained stationary and the entire cylinder block rotated around it...
and radial engine
Radial engine
The radial engine is a reciprocating type internal combustion engine configuration in which the cylinders point outward from a central crankshaft like the spokes on a wheel...
s the latter typically have 7 or 9 cylinders in a single ring, or 10 or 14 cylinders in two rings.

Petrol engines may be air-cooled
Air-cooled engine
Air-cooled engines rely on the circulation of air directly over hot parts of the engine to cool them.-Introduction:Most modern internal combustion engines are cooled by a closed circuit carrying liquid coolant through channels in the engine block and cylinder head, where the coolant absorbs heat,...
, with fins (to increase the surface area on the cylinders and cylinder head
Cylinder head
In an internal combustion engine, the cylinder head sits above the cylinders on top of the cylinder block. It closes in the top of the cylinder, forming the combustion chamber. This joint is sealed by a head gasket...
); or liquid-cooled, by a water jacket
Water jacket
A water jacket is a water-filled void surrounding a device, typically a metal sheath having intake and outlet vents to allow water to be pumped through the void. The flow of water to an external heating or cooling device allows precise temperature control of the device.-Applications:Water jackets...
and radiator
Radiator (engine cooling)
Radiators are used for cooling internal combustion engines, mainly in automobiles but also in piston-engined aircraft, railway locomotives, motorcycles, stationary generating plant or any similar use of such an engine....
. The coolant
Antifreeze
Antifreeze is a freeze preventive used in internal combustion engines and other heat transfer applications, such as HVAC chillers and solar water heaters....
was formerly water, but is now usually a mixture of water and either ethylene glycol
Ethylene glycol
Ethylene glycol is an organic compound widely used as an automotive antifreeze and a precursor to polymers. In its pure form, it is an odorless, colorless, syrupy, sweet-tasting liquid...
or propylene glycol
Propylene glycol
Propylene glycol, also called 1,2-propanediol or propane-1,2-diol, is an organic compound with formula C3H8O2 or HO-CH2-CHOH-CH3...
. These mixtures have lower freezing points and higher boiling points than pure water and also prevent corrosion, with modern antifreezes also containing lubricants and other additives to protect water pump
Water Pump
Water Pump is one of the neighbourhoods of Gulberg Town in Karachi, Sindh, Pakistan. It is near main Water Pump that supplies fresh water to the city of Karachi....
seals and bearings. The cooling system is usually slightly pressurized to further raise the boiling point
Boiling point
The boiling point of an element or a substance is the temperature at which the vapor pressure of the liquid equals the environmental pressure surrounding the liquid....
of the coolant.

Petrol engines use spark ignition and high voltage
High voltage
The term high voltage characterizes electrical circuits in which the voltage used is the cause of particular safety concerns and insulation requirements...
current for the spark may be provided by a magneto
Magneto (electrical)
A magneto is an electrical generator that uses permanent magnets to produce alternating current.Magnetos adapted to produce pulses of high voltage are used in the ignition systems of some gasoline-powered internal combustion engines to provide power to the spark plugs...
or an ignition coil
Ignition coil
An ignition coil is an induction coil in an automobile's ignition system which transforms the battery's 12 volts to the thousands of volts needed to create an electric spark in the spark plugs to ignite the fuel...
. In modern car engines the ignition timing
Ignition timing
Ignition timing, in a spark ignition internal combustion engine , is the process of setting the angle relative to piston position and crankshaft angular velocity that a spark will occur in the combustion chamber near the end of the compression stroke...
is managed by an electronic Engine Control Unit
Engine Control Unit
An engine control unit is a type of electronic control unit that determines the amount of fuel, ignition timing and other parameters an internal combustion engine needs to keep running...
.
The source of this article is wikipedia, the free encyclopedia.  The text of this article is licensed under the GFDL.