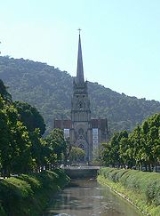 Nestled among the forested hills of the Serra dos Órgãos
Serra dos Órgãos
Serra dos Órgãos is a mountain range in the state of Rio de Janeiro, Brazil, which was turned into a national park in 1939. It is located about a one-hour drive from the city of Rio de Janeiro....
, in the valley of the Quitandinha and Piabanha
Piabanha River
The Piabanha River is a river of Rio de Janeiro state in southeastern Brazil.-References:*...
rivers, Petrópolis is a popular summer holiday spot. Besides the climate and surroundings, the main attraction is the former Summer Palace of the second Brazilian Emperor, which is now the Imperial Museum, specializing in Imperial history and memorabilia.

Petrópolis is home to the National Laboratory for Scientific Computing (LNCC), a research unit of the Ministry of Science and Technology of the Brazilian Federal Government.

The town's name ("city of Peter") honors Emperor
Emperor
An emperor is a monarch, usually the sovereign ruler of an empire or another type of imperial realm. Empress, the female equivalent, may indicate an emperor's wife or a woman who rules in her own right...
Pedro II
Pedro II of Brazil
Dom Pedro II , nicknamed "the Magnanimous", was the second and last ruler of the Empire of Brazil, reigning for over 58 years. Born in Rio de Janeiro, he was the seventh child of Emperor Dom Pedro I of Brazil and Empress Dona Maria Leopoldina and thus a member of the Brazilian branch of...
, the nation's second monarch and son of Pedro I. The city was the summer residence of the Brazilian Emperors
Brazilian Empire
The Empire of Brazil was a 19th-century state that broadly comprised the territories which form modern Brazil. Its government was a representative parliamentary constitutional monarchy under the rule of Emperors Dom Pedro I and his son Dom Pedro II, both members of the House of Braganza—a...
and aristocrat
Aristocracy
Aristocracy , is a form of government in which a few elite citizens rule. The term derives from the Greek aristokratia, meaning "rule of the best". In origin in Ancient Greece, it was conceived of as rule by the best qualified citizens, and contrasted with monarchy...
s in the 19th century, and was the official capital of the state of Rio de Janeiro
Rio de Janeiro (state)
Rio de Janeiro is one of the 27 states of Brazil.Rio de Janeiro has the second largest economy of Brazil behind only São Paulo state.The state of Rio de Janeiro is located within the Brazilian geopolitical region classified as the Southeast...
between 1894 and 1903.

The town's origins can be traced to Bernardo Soares de Proença, who in 1720 opened an alternative route between Rio de Janeiro and Minas Gerais
Minas Gerais
Minas Gerais is one of the 26 states of Brazil, of which it is the second most populous, the third richest, and the fourth largest in area. Minas Gerais is the Brazilian state with the largest number of Presidents of Brazil, the current one, Dilma Rousseff, being one of them. The capital is the...
, across the Serra da Estrela. While traveling to Minas Gerais along this route, Emperor Pedro I found the region's climate pleasant. Thus, in 1830 he bought a farm, and had his Summer Palace built there, but he never saw it finished, because he stepped down from the throne. Other Brazilian aristocrats eventually followed suit. Pedro's Palace is nowadays the Imperial Museum, one of the main attractions of the 'alpine city' of Petrópolis, together with the Cathedral of Saint Peter of Alcântara, the Crystal Palace and the House of Santos-Dumont. The 'Imperial City' became in due time home for artists, intellectuals and celebrities, and by the twentieth century, one of the main tourist attractions in the country.

German
Germany
Germany , officially the Federal Republic of Germany , is a federal parliamentary republic in Europe. The country consists of 16 states while the capital and largest city is Berlin. Germany covers an area of 357,021 km2 and has a largely temperate seasonal climate...
farmers from the Rhineland
Rhineland
Historically, the Rhinelands refers to a loosely-defined region embracing the land on either bank of the River Rhine in central Europe....
were encouraged to immigrate and to settle on the Emperor's outlying lands, to help give the Palace a charming urban setting. The settlement of Petrópolis was founded on March 16, 1843, being promoted to district
District
Districts are a type of administrative division, in some countries managed by a local government. They vary greatly in size, spanning entire regions or counties, several municipalities, or subdivisions of municipalities.-Austria:...
in 1844 and finally city
City
A city is a relatively large and permanent settlement. Although there is no agreement on how a city is distinguished from a town within general English language meanings, many cities have a particular administrative, legal, or historical status based on local law.For example, in the U.S...
in 1857. The road connecting the city to Rio de Janeiro
Rio de Janeiro
Rio de Janeiro , commonly referred to simply as Rio, is the capital city of the State of Rio de Janeiro, the second largest city of Brazil, and the third largest metropolitan area and agglomeration in South America, boasting approximately 6.3 million people within the city proper, making it the 6th...
was opened in 1910 and paved in 1928. The urban design was carried out by Major-Engineer Julius Friedrich Koeler. 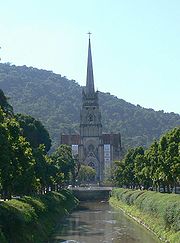 On a visit at the Philadelphia Exposition of 1876, Pedro II was impressed by Alexander Graham Bell
Alexander Graham Bell
Alexander Graham Bell was an eminent scientist, inventor, engineer and innovator who is credited with inventing the first practical telephone....
's new invention, the telephone
Telephone
The telephone , colloquially referred to as a phone, is a telecommunications device that transmits and receives sounds, usually the human voice. Telephones are a point-to-point communication system whose most basic function is to allow two people separated by large distances to talk to each other...
, and had a line connecting his Summer Palace to his farm headquarters.

Even after the establishment of the Republic and the exile of the Imperial family in 1889, the city continued to play a significant role in Brazilian history. Curiously, it was a frequent choice as summer residence for presidents of the republic, who lodged at the Palace of Rio Negro. In 1903 the Palace of Rio Negro saw the signing of a peace treaty with Bolivia, which gave Brazil the Acre
Acre (state)
Acre is one of the 27 states of Brazil. It is situated in the southwest of the Northern Region, bordering Amazonas to the north, Rondônia to the east, Bolivia to the southeast and the Ucayali Region of Peru to the south and west. It occupies an area of 152,581.4 km2, being slightly smaller...
territory. On August 15, 1947, the Organization of American States
Organization of American States
The Organization of American States is a regional international organization, headquartered in Washington, D.C., United States...
opened there the Conference for the Maintenance of Peace and Security in the Continent, from which derived the Interamerican Treaty for Reciprocal Assistance.

Petrópolis (city of Peter) was one of the two cities who held the Interzonal Chess tournament of 1973
Candidates Tournament
The Candidates Tournament is a chess tournament organized by the world chess federation FIDE since 1950, as the final contest to determine the challenger for the World Chess Championship...
. Coincidentally, the other city was Leningrad
Leningrad
Leningrad is the former name of Saint Petersburg, Russia.Leningrad may also refer to:- Places :* Leningrad Oblast, a federal subject of Russia, around Saint Petersburg* Leningrad, Tajikistan, capital of Muminobod district in Khatlon Province...
, former Petrograd (city of Peter).