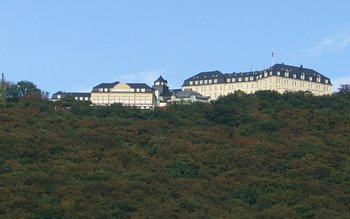 The Petersberg Agreement is an international treaty that extended the rights of the Federal Government of Germany vis-a-vis the occupying forces of Britain, France, and the United States, and is viewed as the first major step of Federal Republic of Germany (West Germany
West Germany
West Germany is the common English, but not official, name for the Federal Republic of Germany or FRG in the period between its creation in May 1949 to German reunification on 3 October 1990....
) towards sovereignty
Sovereignty
Sovereignty is the quality of having supreme, independent authority over a geographic area, such as a territory. It can be found in a power to rule and make law that rests on a political fact for which no purely legal explanation can be provided...
. It was signed by Chancellor Konrad Adenauer
Konrad Adenauer
Konrad Hermann Joseph Adenauer was a German statesman. He was the chancellor of the West Germany from 1949 to 1963. He is widely recognised as a person who led his country from the ruins of World War II to a powerful and prosperous nation that had forged close relations with old enemies France,...
of the FRG and the Allied High Commission
Allied High Commission
The Allied High Commission was established by the United States of America, the United Kingdom, and France after the 1948 breakdown of the Allied Control Council to regulate and supervise the development of the newly established Federal Republic of Germany The Allied High Commission (also known...
ers Brian Hubert Robertson (Britain), André François-Poncet
André François-Poncet
André François-Poncet was a French politician and diplomat whose post as ambassador to Germany allowed him to witness first-hand the rise to power of Adolf Hitler and the Nazi Party, and the Nazi regime's preparations for war.François-Poncet was the son of a counselor of the Court of Appeals in...
(France
France
The French Republic , The French Republic , The French Republic , (commonly known as France , is a unitary semi-presidential republic in Western Europe with several overseas territories and islands located on other continents and in the Indian, Pacific, and Atlantic oceans. Metropolitan France...
), and John J. McCloy
John J. McCloy
John Jay McCloy was a lawyer and banker who served as Assistant Secretary of War during World War II, president of the World Bank and U.S. High Commissioner for Germany...
(United States of America) on November 22, 1949. The Petersberg near Bonn was at that time the seat of the High Commissioners and the place of signature. It was the first modification of the Occupation statute
Occupation statute
The Occupation Statute of Germany of April 10, 1949 specified the roles and responsibilities of the newly created German government and the Allied High Commission in West Germany...
.


Main topics of the agreement

Adenauer was heavily criticized in parliament for his signing of the agreement, particularly due to the Ruhr issue.

The International Authority for the Ruhr was established on the 28 April 1949. Of the 15 votes 3 were assigned to the German state, although voted as a block by a representative of the occupation authority. By agreeing to join the control council of the authority West Germany gained control of those three votes, but also accepted the control of the authority over West Germany's main industrial center. In the following debate in parliament Adenauer stated:

"The Allies have told me that dismantling would be stopped only if I satisfy the Allied desire for security," "Does the Socialist Party want dismantling to go on to the bitter end?"


The opposition leader Kurt Schumacher
Kurt Schumacher
Dr. Kurt Schumacher , was chairman of the Social Democratic Party of Germany from 1946 and first Leader of the Opposition in the West German Bundestag parliament from 1949 until his death...
responded by labeling Adenauer "Chancellor of the Allies".

The first treaty with a foreign power that West Germany was allowed to sign was the unpopular Marshall plan agreement specified in the treaty. Under U.S. pressure the agreement was also made into federal law. Although it gave the Germans greater freedom in how to spend the funds, it also gave the U.S. greater powers to interfere in German economic matters, as well as requiring West Germany to subsidize West Berlin
West Berlin
West Berlin was a political exclave that existed between 1949 and 1990. It comprised the western regions of Berlin, which were bordered by East Berlin and parts of East Germany. West Berlin consisted of the American, British, and French occupation sectors, which had been established in 1945...
which was under occupation and not part of West Germany. The treaty also mandated deliveries from Germany to the U.S. of goods in short supply in the U.S.

The treaty stated that for practical reasons the state of war with Germany could not be ended as requested by the Germans. According to the press the state of war was maintained because "the U.S. wants to retain a legal basis for keeping a U.S. force in Western Germany".

In 1952 members of the German parliament went to court to challenge the legality of the agreement.