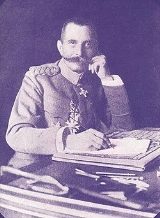 Encyclopedia
Petar Bojović OKS GCMG ' onMouseout='HidePop("22409")' href="/topics/Miševići">Miševići
Miševići
Miševići is a village in the municipality of Hadžići, Bosnia and Herzegovina.-References:...
, Nova Varoš
Nova Varoš
Nova Varoš is a town and municipality in Zlatibor District of Serbia. According to the 1991 census, the municipality of Nova Varoš had a population of 21,812, while according to the 2011 census, the number of inhabitants in the municipality was 16,758...
– January 20, 1945 in Belgrade) was one of four Serbia
Serbia
Serbia , officially the Republic of Serbia , is a landlocked country located at the crossroads of Central and Southeast Europe, covering the southern part of the Carpathian basin and the central part of the Balkans...
n vojvodas (field-marshals) in Balkan Wars
Balkan Wars
The Balkan Wars were two conflicts that took place in the Balkans in south-eastern Europe in 1912 and 1913.By the early 20th century, Montenegro, Bulgaria, Greece and Serbia, the countries of the Balkan League, had achieved their independence from the Ottoman Empire, but large parts of their ethnic...
and World War I
World War I
World War I , which was predominantly called the World War or the Great War from its occurrence until 1939, and the First World War or World War I thereafter, was a major war centred in Europe that began on 28 July 1914 and lasted until 11 November 1918...
.

Petar was born on July 16, 1858 in Miševići
Miševići
Miševići is a village in the municipality of Hadžići, Bosnia and Herzegovina.-References:...
, Nova Varoš
Nova Varoš
Nova Varoš is a town and municipality in Zlatibor District of Serbia. According to the 1991 census, the municipality of Nova Varoš had a population of 21,812, while according to the 2011 census, the number of inhabitants in the municipality was 16,758...
. He had distant ancestry from the Vasojevići
Vasojevici
The Vasojevići tribe is the largest Serb clan in Montenegro. It occupies the area between Vjetarnih Lijeva Rijeka in the South and Bihor under Bijelo Polje in the North, Mateševo in the West to Plav in the East. The clan is one of seven "highland clans"...
.

He fought in Serbian-Ottoman Wars from 1876 to 1878 as a cadet of the Artillery school, as well as in wars that Serbia waged at the beginning of the 20th century. He was Chief of the General Staff for the first time from 1905 to 1908.

In the Balkan Wars
Balkan Wars
The Balkan Wars were two conflicts that took place in the Balkans in south-eastern Europe in 1912 and 1913.By the early 20th century, Montenegro, Bulgaria, Greece and Serbia, the countries of the Balkan League, had achieved their independence from the Ottoman Empire, but large parts of their ethnic...
, he was the Chief of Staff of the 1st Army
Serbian First Army
The Serbian First Army was a Serbian field army that fought during World War I.-August 1914:*First Army - staff in the village Rača**I Timok Infantry Division - Smederevska Palanka...
, which scored huge success in battles of Kumanovo
Battle of Kumanovo
The Battle of Kumanovo or Battle of Kumanova on 23 – 24 October 1912 was a major battle of the First Balkan War. It was an important Serbian victory over the Ottoman army in Vardar Macedonia, shortly after the outbreak of the war...
, Bitola
Battle of Bitola
The Battle of Monastir took place near the town of Bitola, Macedonia during the First Balkan War, from 16 to 19 November 1912. As an ongoing part of the Balkan Wars, the Ottoman Vardar Army retreated from the defeat at Kumanovo and regrouped around Bitola...
(First Balkan War
First Balkan War
The First Balkan War, which lasted from October 1912 to May 1913, pitted the Balkan League against the Ottoman Empire. The combined armies of the Balkan states overcame the numerically inferior and strategically disadvantaged Ottoman armies and achieved rapid success...
) and Bregalnica
Battle of Bregalnica
The Battle of Bregalnica was fought between the Kingdom of Bulgaria army and the Kingdom of Serbia during the Second Balkan War. Serbian forces came out victorious....
(Second Balkan War
Second Balkan War
The Second Balkan War was a conflict which broke out when Bulgaria, dissatisfied with its share of the spoils of the First Balkan War, attacked its former allies, Serbia and Greece, on 29 June 1913. Bulgaria had a prewar agreement about the division of region of Macedonia...
). He took part in peace negotiations with Turkey, held in London
London
London is the capital city of :England and the :United Kingdom, the largest metropolitan area in the United Kingdom, and the largest urban zone in the European Union by most measures. Located on the River Thames, London has been a major settlement for two millennia, its history going back to its...
in 1913, as a military expert in the Serbian Government delegation.

At the start of World War I, he was given command of the 1st Army. His army suffered huge losses at Battle of Drina
Battle of Drina
The Battle of Drina was fought between Serbian and Austro-Hungarian armies in World War I, in September 1914. The Austro-Hungarians engaged in a significant offensive over the Drina river at the western Serbian border, and battles commenced, the heaviest being Battle of Mačkov Kamen and Battle on...
, but managed to stop the Austro-Hungarian offensive. Bojović was wounded in the battle, and was replaced at the army general position by Živojin Mišić
Živojin Mišic
Živojin Mišić OKS GCMG was a Vojvoda and the most successful Serbian commander who participated in all Serbia's wars from 1876 to 1918.-Early years:Misic's grandfather was born in Struganik near Mionica...
. In January 1916, he was appointed Chief of General Staff for a second time in place of the ailing vojvoda Radomir Putnik
Radomir Putnik
Radomir Putnik, also known as Vojvoda Putnik, OSS OCT OKS GCMG was a Serbian Field Marshal and Chief of General Staff in the Balkan Wars and World War I, and took part in all wars that Serbia waged from 1876 to 1917.-Biography:...
, who was carried by his soldiers to the city of Skadar. He held that position until June 1918, when he resigned because of dispute with the allied generals on the issue of widening of Thessaloniki Front. He returned to his position Commander of the 1st Army, which broke the enemy lines and advanced deep into the occupied territory. He received the title of vojvoda on September 26, 1918 for his contribution during the war.

In 1921, he was appointed Chief of the General Staff of the Yugoslav Army, and in 1922 he withdrew from active service.
At the very beginning of World War II, Petar Bojovic was appointed Assistant to the Commander-in-Chief of the Yugoslavian Armed Forces, the young King Petar II Karađorđević
Peter II of Yugoslavia
Peter II, also known as Peter II Karađorđević , was the third and last King of Yugoslavia...
. However, because of his old age, he did not participate in the events that followed.