Encyclopedia
Peru
Peru
Peru , officially the Republic of Peru , is a country in western South America. It is bordered on the north by Ecuador and Colombia, on the east by Brazil, on the southeast by Bolivia, on the south by Chile, and on the west by the Pacific Ocean....
vian territory was inhabited 14,000 years ago by hunters and gatherers. Subsequent developments include the appearance of sedentary communities that developed agriculture and irrigation, and the emergence of complex socio-political hierarchies that created sophisticated civilizations, technology and monumental construction.

These cultures developed advanced techniques of cultivation
Tillage
Tillage is the agricultural preparation of the soil by mechanical agitation of various types, such as digging, stirring, and overturning. Examples of human-powered tilling methods using hand tools include shovelling, picking, mattock work, hoeing, and raking...
, gold and silver work, pottery
Pottery
Pottery is the material from which the potteryware is made, of which major types include earthenware, stoneware and porcelain. The place where such wares are made is also called a pottery . Pottery also refers to the art or craft of the potter or the manufacture of pottery...
, metallurgy
Metallurgy
Metallurgy is a domain of materials science that studies the physical and chemical behavior of metallic elements, their intermetallic compounds, and their mixtures, which are called alloys. It is also the technology of metals: the way in which science is applied to their practical use...
and weaving
Weaving
Weaving is a method of fabric production in which two distinct sets of yarns or threads are interlaced at right angles to form a fabric or cloth. The other methods are knitting, lace making and felting. The longitudinal threads are called the warp and the lateral threads are the weft or filling...
. Some of the social structures that later (around the 12th century CE) formed the base of the Inca Empire
Inca Empire
The Inca Empire, or Inka Empire , was the largest empire in pre-Columbian America. The administrative, political and military center of the empire was located in Cusco in modern-day Peru. The Inca civilization arose from the highlands of Peru sometime in the early 13th century...
may be traced back to these previous periods. 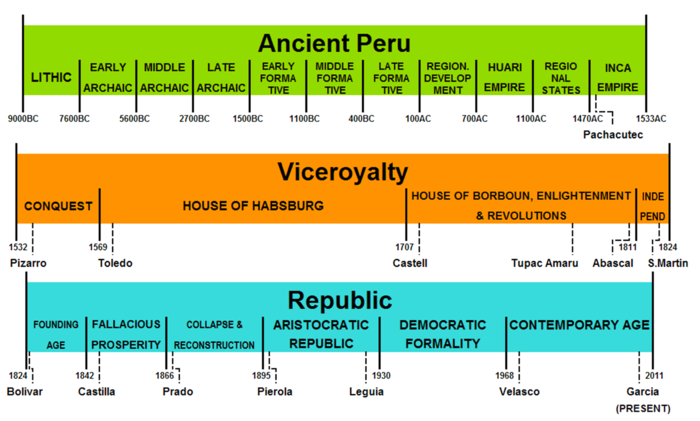