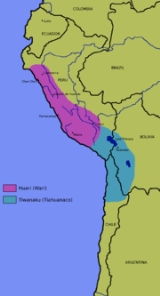 This article is about the historical civilization and city located near present-day Ayacucho. For the Province of the Ancash Region
Ancash Region
Ancash is a region in northern Peru. It is bordered by the La Libertad region on the north, the Huánuco and Pasco regions on the east, the Lima region on the south, and the Pacific Ocean on the west. Its capital is the city of Huaraz, and its largest city and port is Chimbote...
in Peru
Peru
Peru , officially the Republic of Peru , is a country in western South America. It is bordered on the north by Ecuador and Colombia, on the east by Brazil, on the southeast by Bolivia, on the south by Chile, and on the west by the Pacific Ocean....
, see Huari Province
Huari Province
The Huari Province is one of twenty provinces of the Ancash Region in Peru. The famous Chavín de Huantar archaeological site is located in this province.-Political division:Huari is divided into sixteen districts, which are:-External links:...

Early on, the Wari expanded their territory to include the ancient oracle
Oracle
In Classical Antiquity, an oracle was a person or agency considered to be a source of wise counsel or prophetic predictions or precognition of the future, inspired by the gods. As such it is a form of divination....
center of Pachacamac
Pachacamac
The temple of Pachacamac is an archaeological site 40 km southeast of Lima, Peru in the Valley of the Lurín River. Most of the common buildings and temples were built c...
, though it seems to have remained largely autonomous. Later the Wari became dominant in much of the territory of the earlier Moche
Moche
'The Moche civilization flourished in northern Peru from about 100 AD to 800 AD, during the Regional Development Epoch. While this issue is the subject of some debate, many scholars contend that the Moche were not politically organized as a monolithic empire or state...
and later Chimu cultures. The reason for this expansion has been debated; it is believed to have been be driven by religious conversion, military conquest, or the spread of agricultural knowledge (specifically terrace agriculture).

During this expansion, the Wari state established architecturally distinctive administrative centers in many of its provinces—these centres are clearly different from the architecture of Tiwanaku, which is believed to have been a more federalized state by some scholars (such as John W. Janusek). Using these administrative centers, the Wari greatly influenced the surrounding countryside, creating new fields with terraced field
Terrace (agriculture)
Terraces are used in farming to cultivate sloped land. Graduated terrace steps are commonly used to farm on hilly or mountainous terrain. Terraced fields decrease erosion and surface runoff, and are effective for growing crops requiring much water, such as rice...
technology and investing in a major road network -- both of which were used by the Inca when they began to expand their empire several centuries later. However, little is known about the details of the Wari administrative structure, as they did not appear to use a form of written record. But, the emphasis on homogeneous administrative architecture and evidence for significant social stratification suggests a complex socio-political hierarchy.

The Wari culture began to deteriorate around 800 A.D. Archeologists have determined that the city of Wari was vastly depopulated by 1000 A.D., although it continued to be lived in by a small number of descendant groups. These groups ceased all major construction, however, and show significant levels of inter-personal violence, suggesting that warfare and raiding increased amongst rival groups upon the collapse of the Wari state structure (TA Tung 2008). With the collapse of the Wari, the Late Intermediate Period
Cultural periods of Peru
This is a chart of cultural periods of Peru and the Andean Region developed by Edward Lanning and used by some archaeologists studying the area...
is said to begin.