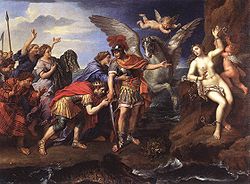 The Queen Cassiopeia, wife of king Cepheus
Cepheus, King of Aethiopia
In Greek mythology, Cepheus is the name of two rulers of Ethiopia, grandfather and grandson.Cepheus son of Belus was the son of Belus and Achiroe, making him the brother of Danaus, King of Libya, and Aegyptus, King of Egypt. He had a wife named Iope and a son who he named Agenor after his paternal...
of Æthiopia
Ethiopia (mythology)
Aethiopia first appears as a geographical term in classical sources, in reference to the Upper Nile region, as well as all the regions south of the Sahara desert. Its earliest mention is in the works of Homer: twice in the Iliad, and three times in the Odyssey...
, was beautiful but also arrogant and vain; these latter two characteristics led to her downfall.

Her name in Greek
Greek language
Greek is an independent branch of the Indo-European family of languages. Native to the southern Balkans, it has the longest documented history of any Indo-European language, spanning 34 centuries of written records. Its writing system has been the Greek alphabet for the majority of its history;...
is Κασσιόπη, which means "she whose words excel".

The boast of Cassiopeia was that both she and her daughter Andromeda
Andromeda (mythology)
Andromeda is a princess from Greek mythology who, as divine punishment for her mother's bragging, the Boast of Cassiopeia, was chained to a rock as a sacrifice to a sea monster. She was saved from death by Perseus, her future husband. Her name is the Latinized form of the Greek Ἀνδρομέδη...
were more beautiful than all the Nereids
Nereids
In Greek mythology, the Nereids are sea nymphs, the fifty daughters of Nereus and Doris, sisters to Nerites. They often accompany Poseidon and can be friendly and helpful to sailors fighting perilous storms. They are particularly associated with the Aegean Sea, where they dwelt with their father...
, the nymph-daughters of the sea god Nereus
Nereus
In Greek mythology, Nereus was the eldest son of Pontus and Gaia , a Titan who with Doris fathered the Nereids, with whom Nereus lived in the Aegean Sea. In the Iliad the Old Man of the Sea is the father of Nereids, though Nereus is not directly named...
. This brought the wrath of Poseidon
Poseidon
Poseidon was the god of the sea, and, as "Earth-Shaker," of the earthquakes in Greek mythology. The name of the sea-god Nethuns in Etruscan was adopted in Latin for Neptune in Roman mythology: both were sea gods analogous to Poseidon...
, ruling god of the sea, upon the kingdom of Ethiopia.

Accounts differ as to whether Poseidon decided to flood the whole country or direct the sea monster Cetus
Cetus (mythology)
In ancient Greek, the word ketos - Latinized as cetus - denotes a large fish, a whale, a shark, or a sea monster. The sea monsters slain by Perseus and Heracles were each referred to as a cetus by ancient sources. The term cetacean originates from cetus. In Greek art, cetea were depicted as...
to destroy it. In either case, trying to save their kingdom, Cepheus and Cassiopeia consulted a wise oracle, who told them that the only way to appease the sea gods was to sacrifice their daughter.

Accordingly, Andromeda was chained to a rock at the sea's edge and left there to helplessly await her fate at the hands of Cetus
Cetus (mythology)
In ancient Greek, the word ketos - Latinized as cetus - denotes a large fish, a whale, a shark, or a sea monster. The sea monsters slain by Perseus and Heracles were each referred to as a cetus by ancient sources. The term cetacean originates from cetus. In Greek art, cetea were depicted as...
. But the hero Perseus
Perseus
Perseus ,Perseos and Perseas are not used in English. the legendary founder of Mycenae and of the Perseid dynasty of Danaans there, was the first of the mythic heroes of Greek mythology whose exploits in defeating various archaic monsters provided the founding myths of the Twelve Olympians...
arrived in time, saved Andromeda, and ultimately became her husband.

Since Poseidon thought that Cassiopeia should not escape punishment, he placed her in the heavens tied to a chair in such a position that, as she circles the celestial pole in her throne, she is upside-down half the time. The constellation resembles the chair that originally represented an instrument of torture. Cassiopeia is not always represented tied to the chair in torment, in some later drawings she is holding a mirror, symbol of her vanity, while in others she holds a palm leaf, a symbolism that is not clear.

There was another Cassiopeia in Greek mythology; her name is also given as "Cassiepeia". According to Hesiod
Hesiod
Hesiod was a Greek oral poet generally thought by scholars to have been active between 750 and 650 BC, around the same time as Homer. His is the first European poetry in which the poet regards himself as a topic, an individual with a distinctive role to play. Ancient authors credited him and...
, this Cassiopeia was the daughter of Arabus and the wife of King Phoenix
Phoenix (son of Agenor)
In Greek mythology, Phoenix was a son of Agenor and Telephassa , brother of Cadmus, Cilix and Europe.When Europa was carried off by Zeus, her three brothers were sent out by Agenor to find her, but the search was unsuccessful...
. She is given as the mother of the hero Atymnius
Atymnius
In Greek mythology, Atymnius is a name that may refer to:*Son of Zeus and Cassiopeia, a beautiful boy, who was beloved by Sarpedon. Others call him a son of Phoenix . He seems to have been worshipped at Gortyn in Crete together with Europa.*A Trojan warrior, son of Emathion and Pegasis. Was killed...
, by either her husband or the god Zeus
Zeus
In the ancient Greek religion, Zeus was the "Father of Gods and men" who ruled the Olympians of Mount Olympus as a father ruled the family. He was the god of sky and thunder in Greek mythology. His Roman counterpart is Jupiter and his Etruscan counterpart is Tinia.Zeus was the child of Cronus...
. Other accounts also claim she was the mother, by Phoenix, of Phineas
Phineas
In Greek mythology, Phineas was a Phoenician King of Thrace.The name 'Phineas' or 'Phineus' may be associated with the ancient city of Phinea on the Thracian Bosphorus.-Phineas, Son of Agenor:...
and Carme
Carme (mythology)
Carme, the Latinized form of Greek Karmê , was a female Cretan spirit who assisted the grain harvest of Demeter's Cretan predecessor. According to the Olympian mythology, she was the mother, by Zeus, of the virginal huntress Britomartis, also called Diktynna, whom she bore at Kaino...
, although the latter is more often said to be a daughter of Eubuleus
Eubuleus
In ancient Greek religion and myth, Eubuleus is a god known primarily from devotional inscriptions for mystery religions. The name appears several times in the corpus of the so-called Orphic gold tablets spelled variously, with forms including Euboulos, Eubouleos and Eubolos...
, a Cretan.

The role of Cassiopeia was played by actress Siân Phillips
Siân Phillips
Jane Elizabeth Ailwên "Siân" Phillips, CBE, is a Welsh actress.-Early life:Phillips was born in Gwaun-Cae-Gurwen, Neath Port Talbot, Wales, the daughter of Sally , a teacher, and David Phillips, a steelworker-turned-policeman...
in Clash of the Titans
Clash of the Titans (1981 film)
Clash of the Titans is an American 1981 fantasy–adventure film involving the Greek hero Perseus. It was released on June 12, 1981 and earned a gross profit of $41 million domestically, on a $15 million budget , by which it was the 11th highest grossing film of the year. A novelization of the film...
(1981). In the film she is not punished by Poseidon. Instead the goddess Thetis
Thetis
Silver-footed Thetis , disposer or "placer" , is encountered in Greek mythology mostly as a sea nymph or known as the goddess of water, one of the fifty Nereids, daughters of the ancient one of the seas with shape-shifting abilities who survives in the historical vestiges of most later Greek myths...
declares that Andromeda would be given to the Kraken
Kraken
Kraken are legendary sea monsters of giant proportions said to have dwelt off the coasts of Norway and Iceland.In modern German, Krake means octopus but can also refer to the legendary Kraken...
, though Perseus rescues her. In the 2010 remake
Clash of the Titans (2010 film)
Clash of the Titans is a 2010 fantasy and action remake of the 1981 film of the same name . The story is very loosely based on the Greek myth of Perseus. Directed by Louis Leterrier and starring Sam Worthington, the film was originally set for standard release on March 26, 2010...
, Cassiopeia is portrayed by actress Polly Walker
Polly Walker
Polly Walker is an English actress.- Early life :Walker was born in Warrington, Cheshire, England. Her first school was Silverdale Preparatory West Acton, London. At 16, Walker graduated from Ballet Rambert School in Twickenham, began her career as a dancer, but had to abandon dancing after a leg...
, and the character once again is not punished by Poseidon, but aged to death by Hades
Hades
Hades , Hadēs, originally , Haidēs or , Aidēs , meaning "the unseen") was the ancient Greek god of the underworld. The genitive , Haidou, was an elision to denote locality: "[the house/dominion] of Hades". Eventually, the nominative came to designate the abode of the dead.In Greek mythology, Hades...
.

In the 1973 novel Momo (novel) by Michael Ende
Michael Ende
Michael Andreas Helmuth Ende was a German author of fantasy and children's literature. He is best known for his epic fantasy work The Neverending Story; other famous works include Momo and Jim Button and Luke the Engine Driver...
, Cassiopeia is a tortoise who can see 30 minutes into the future and is friends with the main character Momo.