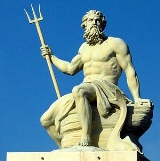 Overview
Poseidon was the god of the sea
Sea
A sea generally refers to a large body of salt water, but the term is used in other contexts as well. Most commonly, it means a large expanse of saline water connected with an ocean, and is commonly used as a synonym for ocean...
, and, as "Earth-Shaker," of the earthquake
Earthquake
An earthquake is the result of a sudden release of energy in the Earth's crust that creates seismic waves. The seismicity, seismism or seismic activity of an area refers to the frequency, type and size of earthquakes experienced over a period of time...
s in Greek mythology
Greek mythology
Greek mythology is the body of myths and legends belonging to the ancient Greeks, concerning their gods and heroes, the nature of the world, and the origins and significance of their own cult and ritual practices. They were a part of religion in ancient Greece...
. The name of the sea-god Nethuns
Nethuns
In Etruscan mythology, Nethuns was the god of wells, later expanded to all water, including the sea. The Etruscan conception of the deity affected Roman Neptune...
in Etruscan
Etruscan mythology
The Etruscans were a diachronically continuous population, with a distinct language and culture during the period of earliest European writing, in the Mediterranean Iron Age in the second half of the first millennium BC...
was adopted in Latin for Neptune
Neptune (mythology)
Neptune was the god of water and the sea in Roman mythology and religion. He is analogous with, but not identical to, the Greek god Poseidon. In the Greek-influenced tradition, Neptune was the brother of Jupiter and Pluto, each of them presiding over one of the three realms of the universe,...
in Roman mythology
Roman mythology
Roman mythology is the body of traditional stories pertaining to ancient Rome's legendary origins and religious system, as represented in the literature and visual arts of the Romans...
: both were sea gods analogous to Poseidon. Linear B
Linear B
Linear B is a syllabic script that was used for writing Mycenaean Greek, an early form of Greek. It pre-dated the Greek alphabet by several centuries and seems to have died out with the fall of Mycenaean civilization...
tablets show that Poseidon was venerated at Pylos
Pylos
Pylos , historically known under its Italian name Navarino, is a town and a former municipality in Messenia, Peloponnese, Greece. Since the 2011 local government reform it is part of the municipality Pylos-Nestoras, of which it is the seat and a municipal unit. It was the capital of the former...
and Thebes
Thebes, Greece
Thebes is a city in Greece, situated to the north of the Cithaeron range, which divides Boeotia from Attica, and on the southern edge of the Boeotian plain. It played an important role in Greek myth, as the site of the stories of Cadmus, Oedipus, Dionysus and others...
in pre-Olympian Bronze Age Greece, but he was integrated into the Olympian gods as the brother of Zeus
Zeus
In the ancient Greek religion, Zeus was the "Father of Gods and men" who ruled the Olympians of Mount Olympus as a father ruled the family. He was the god of sky and thunder in Greek mythology. His Roman counterpart is Jupiter and his Etruscan counterpart is Tinia.Zeus was the child of Cronus...
and Hades
Hades
Hades , Hadēs, originally , Haidēs or , Aidēs , meaning "the unseen") was the ancient Greek god of the underworld. The genitive , Haidou, was an elision to denote locality: "[the house/dominion] of Hades". Eventually, the nominative came to designate the abode of the dead.In Greek mythology, Hades...
. Poseidon has many children. There is a Homeric hymn to Poseidon, who was the protector of many Hellenic cities, although he lost the contest for Athens
Athens
Athens , is the capital and largest city of Greece. Athens dominates the Attica region and is one of the world's oldest cities, as its recorded history spans around 3,400 years. Classical Athens was a powerful city-state...
to Athena
Athena
In Greek mythology, Athena, Athenê, or Athene , also referred to as Pallas Athena/Athene , is the goddess of wisdom, courage, inspiration, civilization, warfare, strength, strategy, the arts, crafts, justice, and skill. Minerva, Athena's Roman incarnation, embodies similar attributes. Athena is...
.
The earliest attested occurrence of the name, written in Linear B
Linear B
Linear B is a syllabic script that was used for writing Mycenaean Greek, an early form of Greek. It pre-dated the Greek alphabet by several centuries and seems to have died out with the fall of Mycenaean civilization...
, is Po-se-da-o or Po-se-da-wo-ne, which correspond to Poseidaōn and Poseidawonos in Mycenean Greek; in Homeric Greek
Homeric Greek
Homeric Greek is the form of the Greek language that was used by Homer in the Iliad and Odyssey. It is an archaic version of Ionic Greek, with admixtures from certain other dialects, such as Aeolic Greek. It later served as the basis of Epic Greek, the language of epic poetry, typically in...
it appears as (Poseidaōn); in Aeolic
Aeolic Greek
Aeolic Greek is a linguistic term used to describe a set of dialects of Ancient Greek spoken mainly in Boeotia , Thessaly, and in the Aegean island of Lesbos and the Greek colonies of Asia Minor ....
as (Poteidaōn); and in Doric
Doric Greek
Doric or Dorian was a dialect of ancient Greek. Its variants were spoken in the southern and eastern Peloponnese, Crete, Rhodes, some islands in the southern Aegean Sea, some cities on the coasts of Asia Minor, Southern Italy, Sicily, Epirus and Macedon. Together with Northwest Greek, it forms the...
as (Poteidan), (Poteidaōn), and (Poteidas).

What was poseidon's personal achievement?

Poseidon in literature and art

How and where did Ancient Greeks worship Poseidon?
More
x