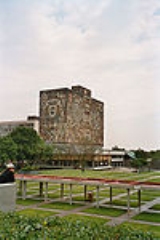 Although the University has other buildings in Mexico City (mostly for undergraduate studies and cultural purposes), in other Mexican states and in other countries (such as Canada and the United States), Ciudad Universitaria, known simply as "C.U.", is the prime symbol of the University.

Ciudad Universitaria is an open place popular on Sundays with families that wish to explore its patios, gardens and footpaths that cover most of its 1,000 hectares. It was built on a lava layer six to eight meters thick which was deposited by the Xitle
Xitle
Xitle is a volcano in the Ajusco range in Cumbres del Ajusco National Park. It is located in the Tlalpan borough in the southwestern part of Mexico City. It is an ash cone volcano with a conical form, round base, altitude of approximately 300m, and a slope between 30° and 40°.Xitle registered its...
volcano around 100 AD.

Due to its topography and vegetation, there are very few straight roads or paths. Roads tend to be concentric circuits, with buildings located within them. Some can only be reached by a short, 5-10 minute walk. Volcanic rock was removed to make room for the buildings, and it was used to make pathways and outer walls. Buildings themselves are made with common materials, concrete and brick being most common, and usually have big windows and gardens, both inside and outside. Most buildings have only two to three floors.

Although different in style, gardens and volcanic rock are a common theme across all buildings with some notable exceptions: the Rectorate Tower and the Central Library
Central Library (UNAM)
Central Library , is the main library in the Ciudad Universitaria Campus of the National Autonomous University of Mexico . It holds one of the largest collections in Mexico...
. These tall, square-shaped buildings, standing a bit isolated from the rest, are adorned by murals made by famous Mexican muralists David Alfaro Siqueiros
David Alfaro Siqueiros
José David Alfaro Siqueiros was a social realist painter, known for his large murals in fresco that helped establish the Mexican Mural Renaissance, together with works by Diego Rivera and José Clemente Orozco, and also a member of the Mexican Communist Party who participated in an...
(Rectorate Tower) and Juan O'Gorman
Juan O'Gorman
Juan O'Gorman was a Mexican painter and architect.-Biography:O'Gorman was born in Coyoacán, then a village to the south of Mexico City and now a borough of the Federal District, to an Irish father, Cecil Crawford O'Gorman and a Mexican mother...
(Central Library).

This last mural, recognized as the largest mural in the world, covering all sides of the Library, based on Aztec and Spanish motifs and UNAM's coat of arms, makes the Central Library Ciudad Universitaria's most iconic building.

The Campus Central is the original campus built in 1943. Comprising 200 hectares, Insurgentes Avenue cuts across it.

Inside the ecological reserve stands the Sculptural Space. It is a big round natural solidified lava bed surrounded by many white triangular prisms that seem to radiate from its center, a bit like a sunflower. There are many big and colorful metallic sculptures made by contemporary artists surrounding this area, hence its name. 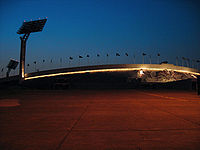 The Mexico '68 Olympic Stadium
Estadio Olímpico Universitario
Estadio Olímpico Universitario is a stadium located in Ciudad Universitaria, Mexico City. It was built in 1952 and at that time was the largest stadium in Mexico. This stadium has a capacity of 63,186 . During the 50s and the 60s this stadium was used mostly for college American football matches...
were built in 1952 and was used to host the 1968 Olympic Games
1968 Summer Olympics
The 1968 Summer Olympics, officially known as the Games of the XIX Olympiad, were an international multi-sport event held in Mexico City, Mexico in October 1968. The 1968 Games were the first Olympic Games hosted by a developing country, and the first Games hosted by a Spanish-speaking country...
held in Mexico City. It is located on the Campus Central portion of the city, and its stands were built with excavated lava rock. These stands contain reliefs designed by Diego Rivera
Diego Rivera
Diego María de la Concepción Juan Nepomuceno Estanislao de la Rivera y Barrientos Acosta y Rodríguez was a prominent Mexican painter born in Guanajuato, Guanajuato, an active communist, and husband of Frida Kahlo . His large wall works in fresco helped establish the Mexican Mural Movement in...
. It was also used in the 1986 Soccer World Cup. Now it holds football matches for Mexico's City university league, as well as being the home stadium for the university's team in the Mexican Football League, the "Pumas
Club Universidad Nacional
Club Universidad Nacional A.C., more commonly known as Pumas de la UNAM, or just Pumas, is a Mexican professional football club based in Mexico City...
". It also has a race track, used for international invitation-only athletic competition in recent times due to the success of Mexican athlete Ana Guevara
Ana Guevara
Ana Gabriela Guevara Espinoza is a now-retired Mexican track and field athlete, specialized in the 400 meters. Her career began in 1996 carrying out diverse tours, participating in her first international competences...
.

There are also football and soccer fields for training of student and children teams. Gyms for martial arts, boxing training and other sports are near the stadium, intended mostly for students.

Designation as a World Heritage Site began as a visit in 2005 to the campus by Francesco Bandarin who was the Director of the World Heritage Center at the time he recommended it. It was eventually recognized an ingenious example of urban architectural design. It is also noted for it integration of modern architecture, Mexican traditions and artwork, including those by David Alfaro Siqueiros
David Alfaro Siqueiros
José David Alfaro Siqueiros was a social realist painter, known for his large murals in fresco that helped establish the Mexican Mural Renaissance, together with works by Diego Rivera and José Clemente Orozco, and also a member of the Mexican Communist Party who participated in an...
, José Chávez Morado
José Chávez Morado
José Chávez Morado was a Mexican painter and sculptor.- Biography :Morado was born in Silao, near the city of Guanajuato, where Diego Rivera was born, and like Rivera he is a well known and highly regarded painter and sculptor who became most famous for the murals he painted in Mexico in the first...
and Francisco Eppens.

There are eleven main bus routes in Ciudad Universitaria provided by the university itself, through its Internal Transport System. Routes 1 through 5 have their base on the west side of the University, near the metro
Mexico City Metro
The Mexico City Metro , officially called Sistema de Transporte Colectivo, is a metro system that serves the metropolitan area of Mexico City...
exit (Metro Universidad
Metro Universidad
Metro Universidad is astation on the Mexico City Metro. It is located in the southern reaches of Mexico City, in Coyoacán borough. A surface station, it is the current terminus of Line 3...
. Three other routes (6,7,8) have their base on parking number 1 of the Olympic stadium. They are free and run from Monday to Friday, from 06:20 until 22:30 hrs. Cars are allowed inside the campus, and there are also taxis taking passengers in groups, following the official bus routes. Some of these routes have long and short versions, a few first and last stops are the same but the long version takes a different route to less visited zones. Additionally, there is a temporary route to take new students to the registration center.

There are three main points of entry to University City, two from the metro (Metro Universidad
Metro Universidad
Metro Universidad is astation on the Mexico City Metro. It is located in the southern reaches of Mexico City, in Coyoacán borough. A surface station, it is the current terminus of Line 3...
and Metro Copilco
Metro Copilco
Metro Copilco is a station along Line 3 on the Mexico City Metro. Located in the Coyoacán borough, in the south of Mexico City, on Avenida Enríquez Ureña...
stations), and Avenida Insurgentes, running north to south, splitting University City in half. This important avenue is useful to reach other parts of the city, and is near the Olympic Stadium and Cultural Zone.

Lately, a program called "C.U. Limpia" (Clean C.U.) offers 58 bicycle stations around University City, these stations contain 200 bicycles each, all of them new, that can be rented by students and returned to any of the other stations around. These have become very popular with students and teachers trying to promote a less polluting mode of transportation.

There are university owned cafeterias around the campus, but they are "franchised" to cooperatives, with the exception of the cafeteria at the Faculty of Sciences (called Café Ciencias) which is run solely by students. These cafeterias are permanent, one floor buildings and very similar to each other. There are also small, permanent shops on the side of some non-schooling buildings, where a full-size cafeteria would be impractical. Some of these shops offer photocopies and office supplies instead of food.

Some semi-permanent shops, selling mostly candies and packaged food, are around the campus. These are built and dismantled every day but are very stable, lasting years in the same place. A few sell University memorabilia, mostly related to the soccer team. Around the campus, but mostly between the Central Library and the Faculty of Philosophy and Literature, one can find people selling crafts as well as music, films and books, some used, some new, but most of them pirated or bootleg
Copyright infringement
Copyright infringement is the unauthorized or prohibited use of works under copyright, infringing the copyright holder's exclusive rights, such as the right to reproduce or perform the copyrighted work, or to make derivative works.- "Piracy" :...
ged.

Around the metro stations close to the University there are many food shops, but also bookstores, photocopying, photographic studios and the like. Near the northern station, Copilco, just outside University City, there are many printing shops running for some blocks, where students get their theses bound.

Near Metro Universidad station, on the fringe of University City, there is the "Tienda UNAM" or UNAM Store. It is big supermarket that offers furniture, clothing, food and beverages, vegetables, electronic and computing equipment, toys and many other things at competitive prices. It is run by the University itself. Meant for university employees and their families, it is open to the general public. 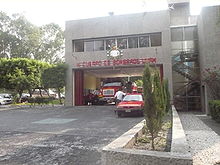 Despite its size and the lack of entry controls, University City is really a very safe place. There is an internal surveillance group, "Auxilio UNAM" (UNAM Help). They patrol the campus all day, especially on vacation days and weekends, but have no firearms, they have hummers, motorcycles and golf carts. For historical and legal reasons to do with university autonomy, law enforcement officers do not enter University City unless specifically requested by the University authorities. Crimes do happen, but are sporadic and usually occur late at night, when most people (both students and employees) have already left. There is also an emergency medical station and a fire station inside campus.
The source of this article is wikipedia, the free encyclopedia.  The text of this article is licensed under the GFDL.