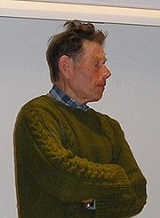 Encyclopedia
Kaarlo Pentti Linkola is a radical Finnish
Finland
Finland , officially the Republic of Finland, is a Nordic country situated in the Fennoscandian region of Northern Europe. It is bordered by Sweden in the west, Norway in the north and Russia in the east, while Estonia lies to its south across the Gulf of Finland.Around 5.4 million people reside...
deep ecologist, polemicist, and fisherman. He has written widely about his ideas and is a prominent thinker in Finland, but, at the same time, is also an extremely controversial figure. He lives a simple and austere life. Linkola was occupitional whole-year fisherman from 1959 to 1995. He has fished on Keitele
Keitele
Keitele is a municipality of Finland.It is located in the province of Eastern Finland and is part of the Northern Savonia region. The municipality has a population of and covers an area of of which is water. The population density is ....
, Päijänne, Gulf of Finland
Gulf of Finland
The Gulf of Finland is the easternmost arm of the Baltic Sea. It extends between Finland and Estonia all the way to Saint Petersburg in Russia, where the river Neva drains into it. Other major cities around the gulf include Helsinki and Tallinn...
and from 1978 he fishes on Vanajavesi
Vanajavesi
Vanajavesi is a lake in Finland. It is part of the Kokemäenjoki basin. The lake gathers waters from a wide area in the regions of Pirkanmaa, Tavastia Proper and parts of the Päijänne Tavastia region.-Settlements:...
. Nowadays Pentti Linkola receives an old-age government pension and fishes only winters.

Linkola blames humans for the continuous degradation of the environment. He promotes rapid population decline in order to combat the problems commonly attributed to overpopulation
Overpopulation
Overpopulation is a condition where an organism's numbers exceed the carrying capacity of its habitat. The term often refers to the relationship between the human population and its environment, the Earth...
. He is also strongly in favour of deindustrialization
Deindustrialization
Deindustrialization is a process of social and economic change caused by the removal or reduction of industrial capacity or activity in a country or region, especially heavy industry or manufacturing industry. It is an opposite of industrialization.- Multiple interpretations :There are multiple...
and opposes democracy
Democracy
Democracy is generally defined as a form of government in which all adult citizens have an equal say in the decisions that affect their lives. Ideally, this includes equal participation in the proposal, development and passage of legislation into law...
, which he calls the "Religion of Death," believing it to be an agent of wasteful capitalism
Capitalism
Capitalism is an economic system that became dominant in the Western world following the demise of feudalism. There is no consensus on the precise definition nor on how the term should be used as a historical category...
and consumerism
Consumerism
Consumerism is a social and economic order that is based on the systematic creation and fostering of a desire to purchase goods and services in ever greater amounts. The term is often associated with criticisms of consumption starting with Thorstein Veblen...
. He considers the proponents of economic growth
Economic growth
In economics, economic growth is defined as the increasing capacity of the economy to satisfy the wants of goods and services of the members of society. Economic growth is enabled by increases in productivity, which lowers the inputs for a given amount of output. Lowered costs increase demand...
to be ignorant of the subtle destructive effects which free market
Free market
A free market is a competitive market where prices are determined by supply and demand. However, the term is also commonly used for markets in which economic intervention and regulation by the state is limited to tax collection, and enforcement of private ownership and contracts...
policies have had over the past two centuries.

Linkola grew up in Helsinki, spending the summers in the countryside, at the farm of his grandfather Hugo Suolahti
Hugo Suolahti
Hugo Suolahti was an early twentieth century Finnish politician, linguist and philologist...
. His father Kaarlo Linkola
Kaarlo Linkola
Kaarlo Linkola was a Finnish botanist and phytogeographer.Linkola was docent of botany at Helsinki University 1919–1922. He was professor of botany at University of Turku from 1922, and at Helsinki University from 1925...
was the Rector
Rector
The word rector has a number of different meanings; it is widely used to refer to an academic, religious or political administrator...
of Helsinki University and his grandfather had worked as the Chancellor
Chancellor
Chancellor is the title of various official positions in the governments of many nations. The original chancellors were the Cancellarii of Roman courts of justice—ushers who sat at the cancelli or lattice work screens of a basilica or law court, which separated the judge and counsel from the...
of that same university. Pentti Linkola chose not to continue his zoological
Zoology
Zoology |zoölogy]]), is the branch of biology that relates to the animal kingdom, including the structure, embryology, evolution, classification, habits, and distribution of all animals, both living and extinct...
and botanical
Botany
Botany, plant science, or plant biology is a branch of biology that involves the scientific study of plant life. Traditionally, botany also included the study of fungi, algae and viruses...
studies after his first year.

In the essay collection Unelmat paremmasta maailmasta (Dreams about a Better World) (1971) he explained for the first time his ecological attitudes. He has continued to speak against the modern Western
Western culture
Western culture, sometimes equated with Western civilization or European civilization, refers to cultures of European origin and is used very broadly to refer to a heritage of social norms, ethical values, traditional customs, religious beliefs, political systems, and specific artifacts and...
way of life and the overconsumption of natural resources. His latest books Johdatus 1990-luvun ajatteluun (Introduction to the Thinking of the 1990s) (1989) and Voisiko elämä voittaa? (Could Life Prevail?) (2004), translated in 2009 into English as Can Life Prevail? are collections of his writings that have been published in various Finnish newspapers and magazines.

As a philosopher Linkola can be described as a biocentric
Biocentrism (ethics)
Biocentrism , in a political and ecological sense, is an ethical point of view which extends inherent value to non-human species, ecosystems, and processes in nature - regardless of their sentience...
empiricist
Empirical
The word empirical denotes information gained by means of observation or experimentation. Empirical data are data produced by an experiment or observation....
. A website ("fansite") set up in Linkola's name states that in the West his ideas are considered to be "fascist" and "made taboo". He demands that man return to a smaller ecological niche
Ecological niche
In ecology, a niche is a term describing the relational position of a species or population in its ecosystem to each other; e.g. a dolphin could potentially be in another ecological niche from one that travels in a different pod if the members of these pods utilize significantly different food...
and abandon modern technology
Technology
Technology is the making, usage, and knowledge of tools, machines, techniques, crafts, systems or methods of organization in order to solve a problem or perform a specific function. It can also refer to the collection of such tools, machinery, and procedures. The word technology comes ;...
and what he describes as the almost-religious pursuit of economic growth
Economic growth
In economics, economic growth is defined as the increasing capacity of the economy to satisfy the wants of goods and services of the members of society. Economic growth is enabled by increases in productivity, which lowers the inputs for a given amount of output. Lowered costs increase demand...
. Linkola considers human population growth the biggest threat to life on Earth.

Linkola's first political publication was the pamphlet Isänmaan ja ihmisen puolesta (For Fatherland and Man) (1960), in which he spoke strongly for pacifism
Pacifism
Pacifism is the opposition to war and violence. The term "pacifism" was coined by the French peace campaignerÉmile Arnaud and adopted by other peace activists at the tenth Universal Peace Congress inGlasgow in 1901.- Definition :...
and encouraged conscientious objection. In contrast, in 2004 he derided those he considers to be "sanctimonious in their opposition to violence," when the earth is suffering from severe human overpopulation.

He advocates eugenics
Eugenics
Eugenics is the "applied science or the bio-social movement which advocates the use of practices aimed at improving the genetic composition of a population", usually referring to human populations. The origins of the concept of eugenics began with certain interpretations of Mendelian inheritance,...
, genocide
Genocide
Genocide is defined as "the deliberate and systematic destruction, in whole or in part, of an ethnic, racial, religious, or national group", though what constitutes enough of a "part" to qualify as genocide has been subject to much debate by legal scholars...
,and abortion
Abortion
Abortion is defined as the termination of pregnancy by the removal or expulsion from the uterus of a fetus or embryo prior to viability. An abortion can occur spontaneously, in which case it is usually called a miscarriage, or it can be purposely induced...
as possible means to combat overpopulation
Overpopulation
Overpopulation is a condition where an organism's numbers exceed the carrying capacity of its habitat. The term often refers to the relationship between the human population and its environment, the Earth...
. He describes the Stalinist
Great Purge
The Great Purge was a series of campaigns of political repression and persecution in the Soviet Union orchestrated by Joseph Stalin from 1936 to 1938...
and Nazi massacres, as "massive thinning operations," but which have "not overturned our ethical norms". He has suggested that big cities should be attacked by "some trans-national body like the UN", with nuclear weapons or with "bacteriological
Biological warfare
Biological warfare is the use of biological toxins or infectious agents such as bacteria, viruses, and fungi with intent to kill or incapacitate humans, animals or plants as an act of war...
and chemical attacks
Chemical warfare
Chemical warfare involves using the toxic properties of chemical substances as weapons. This type of warfare is distinct from Nuclear warfare and Biological warfare, which together make up NBC, the military acronym for Nuclear, Biological, and Chemical...
". Linkola has described humans as a cancer of the earth, and he desires that the human population "be reduced to about ten percent of what it is now."

Linkola often expresses his admiration for forests and nature in general. He is known for his deep love of birds. He considers education to be the "most precious aspect of society," and advocates for universities to be maintained regardless of the cost. In a 2004 interview given at the international bookfair at Turku Linkola describes the origins of his bitterness towards humankind. In his essay, Women as Protectors of Life, he opines that the "soul of a man, beneath its rough surface, is paradoxically more sensitive, fragile and weak than that of a woman."

In 1995 Linkola founded the Nature Heritage Foundation (Luonnonperintösäätiö). It concentrates on preserving the few ancient forests still left in southern Finland and other nature conservation. The forests are donated to the foundation.