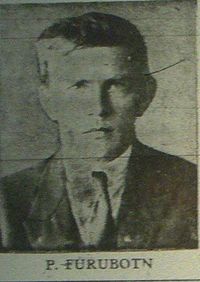 Peder Furubotn was a Norwegian
Norway
Norway , officially the Kingdom of Norway, is a Nordic unitary constitutional monarchy whose territory comprises the western portion of the Scandinavian Peninsula, Jan Mayen, and the Arctic archipelago of Svalbard and Bouvet Island. Norway has a total area of and a population of about 4.9 million...
cabinetmaker, politician for the Communist Party
Communist Party of Norway
The Communist Party of Norway is a political party in Norway without parliamentary representation. It was formed in 1923, following a split in the Norwegian Labour Party. The party played an important role in the resistance to German occupation during the Second World War, and experienced a brief...
and resistance member during World War II
World War II
World War II, or the Second World War , was a global conflict lasting from 1939 to 1945, involving most of the world's nations—including all of the great powers—eventually forming two opposing military alliances: the Allies and the Axis...
.

Furubotn was born in Brekke
Brekke
Brekke is a village and former municipality in Sogn og Fjordane county, Norway. It is located in the northeastern part of the present-day municipality of Gulen in the traditional district of Sogn...
, Sogn og Fjordane
Sogn og Fjordane
is a county in Norway, bordering Møre og Romsdal, Oppland, Buskerud, and Hordaland. The county administration is in the town of Hermansverk in Leikanger municipality while the largest town is Førde....
, the son of Jørgen Furubotn and Valgjerd Miljeteig. He married Gina Dorthea Sandal in 1912. He started working as a cabinetmaker in Bergen
Bergen
Bergen is the second largest city in Norway with a population of as of , . Bergen is the administrative centre of Hordaland county. Greater Bergen or Bergen Metropolitan Area as defined by Statistics Norway, has a population of as of , ....
when he was 14 years old. He joined the local union in 1909, and was a board member of the Bergen chapter for several years. He was also a board member of the Labour Party
Norwegian Labour Party
The Labour Party is a social-democratic political party in Norway. It is the senior partner in the current Norwegian government as part of the Red-Green Coalition, and its leader, Jens Stoltenberg, is the current Prime Minister of Norway....
in Bergen. He was a board member of the radical union branch Fagopposisjonen av 1911, which had been founded by Martin Tranmæl
Martin Tranmæl
Martin Olsen Tranmæl was a radical Norwegian socialist leader.-Biography:Martin Tranmæl grew up in a middle-sized farm in Melhus, in Sør-Trøndelag county, Norway. He started working as a painter and construction worker. In the early 20th century, Tranmæl lived for a while in the USA where he came...
.

He was elected secretary for the Communist Party of Norway
Communist Party of Norway
The Communist Party of Norway is a political party in Norway without parliamentary representation. It was formed in 1923, following a split in the Norwegian Labour Party. The party played an important role in the resistance to German occupation during the Second World War, and experienced a brief...
(Norges Kommunistiske Parti, NKP) from its foundation in 1923, and was chairman of the party from 1925 to 1930. During this period he was among the loyal Moscow supporters and criticized people who diverged from the "correct" political line, as well as the Labour Party. Furubotn stayed in Moscow
Moscow
Moscow is the capital, the most populous city, and the most populous federal subject of Russia. The city is a major political, economic, cultural, scientific, religious, financial, educational, and transportation centre of Russia and the continent...
from 1930 to 1938, when he returned to Norway.

He managed an undercover resistance organization in Norway during the five years of German occupation
Occupation of Norway by Nazi Germany
The occupation of Norway by Nazi Germany started with the German invasion of Norway on April 9, 1940, and ended on May 8, 1945, after the capitulation of German forces in Europe. Throughout this period, Norway was continuously occupied by the Wehrmacht...
. From a centralized camp he activated resistance groups in different parts of the country. The camp developed sectors for economy, transport, distribution, newspapers, sabotage, intelligence and courier traffic, and organized farmers, women and youth. The camp was typically located in isolated mountain dairy farms, and could have a security zone with a 10-kilometre radius. External visits to the headquarters were only allowed during relocation periods. Frequent conferences were normally held at mountain huts or farms within a wider zone. Security personnel were located in the surrounding rural districts, and the camp received intelligence reports from observations of the Gestapo
Gestapo
The Gestapo was the official secret police of Nazi Germany. Beginning on 20 April 1934, it was under the administration of the SS leader Heinrich Himmler in his position as Chief of German Police...
headquarters in Oslo
Oslo
Oslo is a municipality, as well as the capital and most populous city in Norway. As a municipality , it was established on 1 January 1838. Founded around 1048 by King Harald III of Norway, the city was largely destroyed by fire in 1624. The city was moved under the reign of Denmark–Norway's King...
and other cities.

The Germans made several efforts at catching Furubotn and his communist resistance organization. During the German Operation Almenrausch
Operation Almenrausch
Operation Almenrausch was a counter-resistance operation in occupied Norway, planned and carried out by the Wehrmacht and the Nazi-controlled Norwegian Statspolitiet on 13 June 1944...
in June 1944 he successfully made a close escape from a large number of German troops, together with his family and central political activists, including Ørnulf Egge
Ørnulf Egge
Ørnulf Egge was a Norwegian politician for the Workers' Youth League and Communist Party and resistance member during World War II.-Early political career:He was born in Kristiania, and was a son of writer Peter Egge....
, Roald Halvorsen
Roald Halvorsen
Roald Halvorsen was a Norwegian typographer, Communist Party politician and resistance member from World War II....
, Samuel Titlestad and Arne Taraldsen
Arne Taraldsen
Arne Taraldsen was a Norwegian artist and resistance member during the occupation of Norway by Nazi Germany. He started his drawing career with underground publications during World War II.-Early and personal life:...
. But several other members of the organization were arrested in the operation.

Furubotn had a central role within the Communist Party until 1947, when he retired from his position as secretary general. In 1949 he was expelled from the NKP following internal controversies and interference from Moscow. Furubotn and his supporters were accused of being titoists
Titoism
Titoism is a variant of Marxism–Leninism named after Josip Broz Tito, leader of the Socialist Federal Republic of Yugoslavia, primarily used to describe the specific socialist system built in Yugoslavia after its refusal of the 1948 Resolution of the Cominform, when the Communist Party of...
and nationalists. Furubotn continued with political activities, but was isolated from party politics during the Cold War
Cold War
The Cold War was the continuing state from roughly 1946 to 1991 of political conflict, military tension, proxy wars, and economic competition between the Communist World—primarily the Soviet Union and its satellite states and allies—and the powers of the Western world, primarily the United States...
period. Among his post-war publications are from 1948, from 1951, from 1963, and from 1969. His biography was written by historian Torgrim Titlestad. Furubotn died in Oslo
Oslo
Oslo is a municipality, as well as the capital and most populous city in Norway. As a municipality , it was established on 1 January 1838. Founded around 1048 by King Harald III of Norway, the city was largely destroyed by fire in 1624. The city was moved under the reign of Denmark–Norway's King...
in 1975.