Peak copper is the point in time at which the maximum global copper
Copper
Copper is a chemical element with the symbol Cu and atomic number 29. It is a ductile metal with very high thermal and electrical conductivity. Pure copper is soft and malleable; an exposed surface has a reddish-orange tarnish...
production rate is reached. Since copper is a finite resource, at some point in the future new production from within the earth will diminish, and at some earlier time production will reach a maximum. When this will occur is a matter of dispute. Unlike fossil fuel
Fossil fuel
Fossil fuels are fuels formed by natural processes such as anaerobic decomposition of buried dead organisms. The age of the organisms and their resulting fossil fuels is typically millions of years, and sometimes exceeds 650 million years...
s, however, copper is scrap
Scrap
Scrap is a term used to describe recyclable and other materials left over from every manner of product consumption, such as parts of vehicles, building supplies, and surplus materials. Unlike waste, scrap has significant monetary value...
ped and reused and it has been estimated that at least 80% of all copper ever mined is still available (having been repeatedly recycled). Copper is among the most important industrial metals. Copper is used in electrical power cables, data cables, electrical equipment, automobile radiators, cooling and refrigeration tubing, heat exchangers, artillery shell casings, small arms ammunition
Ammunition
Ammunition is a generic term derived from the French language la munition which embraced all material used for war , but which in time came to refer specifically to gunpowder and artillery. The collective term for all types of ammunition is munitions...
, water pipes, and jewellery
Jewellery
Jewellery or jewelry is a form of personal adornment, such as brooches, rings, necklaces, earrings, and bracelets.With some exceptions, such as medical alert bracelets or military dog tags, jewellery normally differs from other items of personal adornment in that it has no other purpose than to...
.
Copper has been in use at least 10,000 years, but more than 95% of all copper ever mined and smelted has been extracted since 1900. As India and China race to catch up with the West, the copper supply chain is becoming more strained, leading to increased prices and an increase in copper theft
Metal theft
Metal theft is the theft of metal items on a very large scale. These thefts usually increase when worldwide prices for scrap metal rise. In recent years, prices for metals have risen dramatically due to rapid industrialization in India and China...
.

Total world production is about 15 million tons per year. Copper demand is increasing by more than 575,000 tons annually and accelerating. Based on 2006 figures for per capita consumption, Tom Graedel and colleagues at Yale University calculate that by 2100 global demand for copper will outstrip the amount extractable from the ground. China accounts for more than 22% of world copper demand.

For some purposes, other metals can substitute. During a copper shortage in the 1970s, aluminium wire
Aluminium wire
Aluminum wire is a type of wiring used in houses, power grids, and airplanes. Aluminum provides a much better conductivity to weight ratio than copper, and therefore is used in power wiring of some aircraft....
was substituted in many applications, but improper design caused a fire danger. The safety issues have since been solved by use of larger sizes of aluminium wire (#8AWG and up), and properly designed aluminium wiring is still being installed in place of copper.

Globally, economic copper resources are being depleted with the equivalent production of three world-class copper mines being consumed annually. Environmental analyst Lester Brown has suggested copper might run out within 25 years based on what he considered a reasonable extrapolation of 2% growth per year.

56 new copper discoveries have been made during the past three decades. World discoveries of copper peaked in 1996.

Copper is a fairly common
Abundance of elements in Earth's crust
The table shows the abundance of elements in Earth's crust. Numbers show percentage or parts per million in mass; 10,000 ppm = 1%.Note that numbers are estimates, and they will vary depending on source and method of estimation. Order of magnitude of data can roughly be relied upon.The table shows...
element, with an estimated concentration of 50-70 ppm (0.005-0.007%) in Earth's crust (1 kg of copper per 15-20 tons of crustal rock). If all this copper were extractable, that would provide humans with a nearly inexhaustible supply of the element (millions of years worth). Unfortunately, most of it can't be extracted profitably at the current level of technology. At the present time, copper deposits are considered potentially profitable if they are located sufficiently close to the surface and they contain at least 0.3-0.5% of copper.

The U.S. Geological Survey reported a current total reserve base of copper (economic and uneconomic) of 1.6 billion tonnes as of 2005, of which 950 million tonnes was considered economically recoverable.

Each year in the USA, more copper is recovered and put back into service from recycled material than is derived from newly mined ore. Copper’s recycle value is so great that premium-grade scrap normally has at least 95% of the value of primary metal from newly mined ore.

Based on current discovery rates and existing geologic surveys, researchers have estimated that 1.6 billion metric tons of copper exist that could potentially be brought into use. This figure relies on the broadest possible definition of available copper as well as a lack of energy constraints and environmental concerns.

Deep-sea nodules are estimated to contain 700 million tonnes of copper.

In Zaire
Zaire
The Republic of Zaire was the name of the present Democratic Republic of the Congo between 27 October 1971 and 17 May 1997. The name of Zaire derives from the , itself an adaptation of the Kongo word nzere or nzadi, or "the river that swallows all rivers".-Self-proclaimed Father of the Nation:In...
, Copper production fell by 90% from 1976 (502,000 tons) to wartime 1993 (50,000 tons). Resumption depends on political factors. 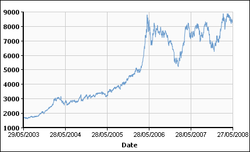 The price of copper struck a first peak level on March 6, 2008 on the London Metal Exchange
London Metal Exchange
The London Metal Exchange is the futures exchange with the world's largest market in options, and futures contracts on base and other metals. As the LME offers contracts with daily expiry dates of up to three months from trade date, along with longer-dated contracts up to 123 months, it also...
(LME), surging 5.8 percent over the previous trading day to 4.02 per pound. The previous record was set on May 12, 2006 at $3.98/lb. The international copper price increased rapidly in early 2008, rising 23 percent in February 2008, then declined 40% before December 2008, and reached $1.30 by year's end. In February 2011 the price peaked at over 10,100US$/tonne.

In his book The Ultimate Resource 2
The Ultimate Resource
The Ultimate Resource is a 1981 book written by Julian Lincoln Simon challenging the notion that humanity was running out of natural resources...
, Julian Simon
Julian Lincoln Simon
Julian Lincoln Simon was a professor of business administration at the University of Maryland and a Senior Fellow at the Cato Institute at the time of his death, after previously serving as a longtime business professor at the University of Illinois at Urbana-Champaign.Simon wrote many books and...
extensively criticizes the notion of "peak resources", and uses copper as one example. He argues that, even though "peak copper" has been a persistent scare since the early 20th century, "known reserves" grew at a rate that outpaced demand, and the price of copper was not rising but falling in the long run. For example, even though world production of copper in 1950 was only 1/8th of what it was today, known reserves were also much lower at the time – around 100 million metric tons – making it appear that the world would run out of copper in 40 to 50 years at most (which has not proven to be the case).

Simon's own explanation for this development is that the very notion of known reserves is deeply flawed, as it does not take into account changes in mining profitability. As richer mines are exhausted, developers turn their attention to poorer sources of the element and eventually develop cheap methods of extracting it, rising "known reserves". Thus, for example, copper was so abundant 5000 years ago, occurring in pure form as well as in highly concentrated copper ores, that prehistoric peoples were able to collect and process it with very basic technology. As of the early 21st century, copper is commonly mined from ores that contain 0.3% to 0.6% of copper by weight. Yet, despite the fact that the material is far less "widespread", the cost of, for example, a copper pot is vastly lower today in real terms than it was 5000 years ago.
The source of this article is wikipedia, the free encyclopedia.  The text of this article is licensed under the GFDL.