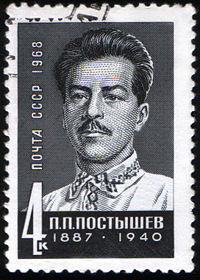 Pavel Petrovich Postyshev ( – February 26, 1939) was a Soviet
Soviet Union
The Soviet Union , officially the Union of Soviet Socialist Republics , was a constitutionally socialist state that existed in Eurasia between 1922 and 1991....
politician. He is considered to be one of the principal architects of the so-called man-made famine of 1932–33, or Holodomor
Holodomor
The Holodomor was a man-made famine in the Ukrainian SSR between 1932 and 1933. During the famine, which is also known as the "terror-famine in Ukraine" and "famine-genocide in Ukraine", millions of Ukrainians died of starvation in a peacetime catastrophe unprecedented in the history of...
.

Postyshev was born in Ivanovo-Voznesensk
Ivanovo
Ivanovo is a city and the administrative center of Ivanovo Oblast, Russia. Population: Ivanovo has traditionally been called the textile capital of Russia. Since most textile workers are women, it has also been known as the "City of Brides"...
.

He was a member of the Russian Social-Democratic Labour Party from 1904, then a member of the Communist Party (Bolshevik
Bolshevik
The Bolsheviks, originally also Bolshevists , derived from bol'shinstvo, "majority") were a faction of the Marxist Russian Social Democratic Labour Party which split apart from the Menshevik faction at the Second Party Congress in 1903....
) in Siberia
Siberia
Siberia is an extensive region constituting almost all of Northern Asia. Comprising the central and eastern portion of the Russian Federation, it was part of the Soviet Union from its beginning, as its predecessor states, the Tsardom of Russia and the Russian Empire, conquered it during the 16th...
. In 1923 he was reassigned from his position in the Far Eastern Republic
Far Eastern Republic
The Far Eastern Republic , sometimes called the Chita Republic, was a nominally independent state that existed from April 1920 to November 1922 in the easternmost part of the Russian Far East...
to supervise organization of the Communist Party committee in Kiev Governorate
Kiev Governorate
Kiev Governorate , or Government of Kiev, was an administrative division of the Russian Empire.The governorate was established in 1708 along with seven other governorates and was transformed into a viceroyalty in 1781...
(guberniya
Guberniya
A guberniya was a major administrative subdivision of the Russian Empire usually translated as government, governorate, or province. Such administrative division was preserved for sometime upon the collapse of the empire in 1917. A guberniya was ruled by a governor , a word borrowed from Latin ,...
) in central Ukraine
Ukrainian SSR
The Ukrainian Soviet Socialist Republic or in short, the Ukrainian SSR was a sovereign Soviet Socialist state and one of the fifteen constituent republics of the Soviet Union lasting from its inception in 1922 to the breakup in 1991...
. In 1925 Postyshev became secretary of the Central Committee of the Communist Party (Bolshevik) of Ukraine, or CP(b)U. In 1926–30 he became a member of the Politburo and Organizational Bureau of Ukraine's Bolshevik Party.

In January 1933 Postyshev was once again sent to Ukraine as Stalin
Joseph Stalin
Joseph Vissarionovich Stalin was the Premier of the Soviet Union from 6 May 1941 to 5 March 1953. He was among the Bolshevik revolutionaries who brought about the October Revolution and had held the position of first General Secretary of the Communist Party of the Soviet Union's Central Committee...
's personal representative, along with thousands of political appointees from Russia. Upon Postyshev's arrival in Ukraine he was elected second secretary of the Central Committee of the Communist Party (Bolshevik) of Ukraine and first secretary of the Kharkiv
Kharkiv
Kharkiv or Kharkov is the second-largest city in Ukraine.The city was founded in 1654 and was a major centre of Ukrainian culture in the Russian Empire. Kharkiv became the first city in Ukraine where the Ukrainian Soviet Socialist Republic was proclaimed in December 1917 and Soviet government was...
city and Kharkiv Oblast Party organizations. From July 1934 to January 1937 he was in charge of the Kiev Oblast
Kiev Oblast
Kyiv Oblast, sometimes written as Kiev Oblast is an oblast in central Ukraine.The administrative center of the oblast is the city of Kyiv , also being the capital of Ukraine...
Party organization. As second secretary he was nominally subordinate to First Secretary Stanislav Kosior
Stanislav Kosior
Stanislav Vikentyevich Kosior, sometimes spelled Kossior was one of three Kosior brothers, Polish-born Soviet politicians. He was General Secretary of the Ukrainian Communist Party, deputy prime minister of the USSR, and a member of the Politburo of the Communist Party of the Soviet Union...
, but his appointment by Stalin effectively gave him supreme power. Postyshev's mission in Ukraine was to eliminate any remaining opposition to Stalin by purging all traces of "nationalist deviation" from the Party, to end the cultural policy of Ukrainization
Ukrainization
Ukrainization is a policy of increasing the usage and facilitating the development of the Ukrainian language and promoting other elements of Ukrainian culture, in various spheres of public life such as education, publishing, government and religion.The term is used, most prominently, for the...
, and to bring collectivization to completion at any cost.

A prominent scapegoat was Mykola Skrypnyk
Mykola Skrypnyk
Mykola Oleksiyovych Skrypnyk was a Ukrainian Bolshevik leader who was a proponent of the Ukrainian Republic's independence, and led the cultural Ukrainization effort in Soviet Ukraine. When the policy was reversed and he was removed from his position, he committed suicide rather than be forced to...
, the director of Ukrainization, who was removed from his post within a month (he later shot himself rather than face a show trial). The end of Ukrainization was accompanied by an attack on cultural institutions in Ukraine and the new Soviet intelligentsia. Under Postyshev, thousands of authors, scholars, philosophers, artists, musicians, and editors were exiled to labour camps, executed, or simply disappeared. Many others avoided being denounced by working according to the dictates of Moscow. "Nests of nationalist counter-revolutionaries" like the commissariats of education, agriculture, and justice, newspapers, journals, encyclopedias and film studios were purged. Over 15,000 in officials were eliminated on charges of "nationalism."

The Ukrainian Communist Party was also targeted. In a prelude to the Great Purge
Great Purge
The Great Purge was a series of campaigns of political repression and persecution in the Soviet Union orchestrated by Joseph Stalin from 1936 to 1938...
, almost 100,000 members were expelled during Postyshev's first year in Ukraine, and a further 168,000 through 1938. Postyshev wrote in his report that the majority were exiled or shot. The highest ranking were paraded through elaborate show trials. As the purges progressed after 1933, affecting millions throughout the Soviet Union, Postyshev's crackdown spread beyond perceived "Ukrainianizers," "nationalists," and opponents of collectivization. Eventually it came to include the liquidation of entire classes such as kulak
Kulak
Kulaks were a category of relatively affluent peasants in the later Russian Empire, Soviet Russia, and early Soviet Union...
s, priests, people who had been members of anti-Bolshevik armies, and even those who had travelled abroad or immigrated from Galicia.

Postyshev criticized the Ukrainian Communists for their "lack of Bolshevik vigilance" in Stalin's systematic enforcement of increased grain quotas. His party activists conducted a brutal campaign through farms and homes, searching for suspected hiding places and confiscating every bit of grain, with disregard for the starvation they encountered. Millions died in the man-made famine of 1932–33, the Holodomor
Holodomor
The Holodomor was a man-made famine in the Ukrainian SSR between 1932 and 1933. During the famine, which is also known as the "terror-famine in Ukraine" and "famine-genocide in Ukraine", millions of Ukrainians died of starvation in a peacetime catastrophe unprecedented in the history of...
.

After the famine, Postyshev appears to have begun identifying with Ukraine and having doubts about Stalin's Great Purge
Great Purge
The Great Purge was a series of campaigns of political repression and persecution in the Soviet Union orchestrated by Joseph Stalin from 1936 to 1938...
—he and the party leadership refused to take the purge as far as Stalin demanded, raising the Soviet leader's suspicions. In August 1937 Postyshev was removed from Ukraine and appointed first secretary of the Kuibyshev Oblast Party Committee. He was arrested in early 1938 and later shot at Kuibyshev
Samara, Russia
Samara , is the sixth largest city in Russia. It is situated in the southeastern part of European Russia at the confluence of the Volga and Samara Rivers. Samara is the administrative center of Samara Oblast. Population: . The metropolitan area of Samara-Tolyatti-Syzran within Samara Oblast...
. Nikita Khrushchev
Nikita Khrushchev
Nikita Sergeyevich Khrushchev led the Soviet Union during part of the Cold War. He served as First Secretary of the Communist Party of the Soviet Union from 1953 to 1964, and as Chairman of the Council of Ministers, or Premier, from 1958 to 1964...
was sent to take over Postyshev's post in Ukraine, along with Vyacheslav Molotov
Vyacheslav Molotov
Vyacheslav Mikhailovich Molotov was a Soviet politician and diplomat, an Old Bolshevik and a leading figure in the Soviet government from the 1920s, when he rose to power as a protégé of Joseph Stalin, to 1957, when he was dismissed from the Presidium of the Central Committee by Nikita Khrushchev...
and Nikolai Yezhov
Nikolai Yezhov
Nikolai Ivanovich Yezhov or Ezhov was a senior figure in the NKVD under Joseph Stalin during the period of the Great Purge. His reign is sometimes known as the "Yezhovshchina" , "the Yezhov era", a term that began to be used during the de-Stalinization campaign of the 1950s...
. Khrushchev had to be appointed by Moscow; he could not be elected because after Postyshev's removal, the entire Central Committee of the CP(b)U "had been purged spotless," according to Khrushchev-

Postyshev is known for reviving the New Year tree
New Year tree
New Year trees are decorations similar to Christmas trees that are displayed in various cultures, but should not be confused with a North American practice of not removing a tree until New Years; such a tree is still considered a Christmas tree....
tradition in the Soviet Union. A letter from Postyshev published in Pravda
Pravda
Pravda was a leading newspaper of the Soviet Union and an official organ of the Central Committee of the Communist Party between 1912 and 1991....
on December 28, 1935 calls for the installation of New Year trees in schools, children's homes, Young Pioneer Palaces, children's clubs, children's theaters and cinemas.

Postyshev was rehabilitated
Rehabilitation (Soviet)
Rehabilitation in the context of the former Soviet Union, and the Post-Soviet states, was the restoration of a person who was criminally prosecuted without due basis, to the state of acquittal...
in 1956 by Nikita Khrushchev.