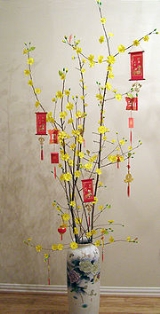 Encyclopedia
New Year trees are decorations similar to Christmas tree
Christmas tree
The Christmas tree is a decorated evergreen coniferous tree, real or artificial, and a tradition associated with the celebration of Christmas. The tradition of decorating an evergreen tree at Christmas started in Livonia and Germany in the 16th century...
s that are displayed in various cultures, but should not be confused with a North American practice of not removing a tree until New Years; such a tree is still considered a Christmas tree.

A New Year tree is the Russia
Russia
Russia or , officially known as both Russia and the Russian Federation , is a country in northern Eurasia. It is a federal semi-presidential republic, comprising 83 federal subjects...
n and Turkish equivalent of Christmas trees.
A spruce
Spruce
A spruce is a tree of the genus Picea , a genus of about 35 species of coniferous evergreen trees in the Family Pinaceae, found in the northern temperate and boreal regions of the earth. Spruces are large trees, from tall when mature, and can be distinguished by their whorled branches and conical...
tree is most usual type of tree used and the variety of tree sorts and decorations used is the same as for Christmas trees. The economic advantages of Russian and Turkish North Americans following such a practice are notable due to prices of Christmas trees plummeting after Christmas.

The tradition to install and decorate a Ёлка (pr: Yolka, tr: spruce tree) dates back to the 17th century when Peter the Great imported the tradition from his travels of Europe. However, in the Imperial Russia Yolka were banned since 1916 by Synod
Synod
A synod historically is a council of a church, usually convened to decide an issue of doctrine, administration or application. In modern usage, the word often refers to the governing body of a particular church, whether its members are meeting or not...
as a tradition, originated in Germany (Russian counterpart during World War I). This ban was prolonged in the Russian SFSR and the Soviet Union until 1935 (New Year tree was seen as a "bourgeois and religious prejudice" until that year). The New Year celebration was not banned, though there was no official holiday for it until 1935. The New Year's tree revived in the USSR after the famous letter by Pavel Postyshev
Pavel Postyshev
Pavel Petrovich Postyshev was a Soviet politician. He is considered to be one of the principal architects of the so-called man-made famine of 1932–33, or Holodomor.Postyshev was born in Ivanovo-Voznesensk....
, published in Pravda
Pravda
Pravda was a leading newspaper of the Soviet Union and an official organ of the Central Committee of the Communist Party between 1912 and 1991....
on December 28, 1935, where he asked for installing New Year trees in schools, children's homes, Young Pioneer Palaces, children's clubs, children's theaters and cinema theaters. In 1937, a New Year Tree was also installed in the Moscow Palace of Unions. An invitation to the Yolka at the Palace of Unions became a matter of honour for Soviet children.

A Turkish new year tree, in Turkish
Turkish language
Turkish is a language spoken as a native language by over 83 million people worldwide, making it the most commonly spoken of the Turkic languages. Its speakers are located predominantly in Turkey and Northern Cyprus with smaller groups in Iraq, Greece, Bulgaria, the Republic of Macedonia, Kosovo,...
Yılbaşı Ağacı, is the same as Christmas trees with Christmas knick-knacks on it. It is called a New Year tree because it is special to the New Year, and that as 95% of population is Muslim
Muslim
A Muslim, also spelled Moslem, is an adherent of Islam, a monotheistic, Abrahamic religion based on the Quran, which Muslims consider the verbatim word of God as revealed to prophet Muhammad. "Muslim" is the Arabic term for "submitter" .Muslims believe that God is one and incomparable...
, Turks
Turkish people
Turkish people, also known as the "Turks" , are an ethnic group primarily living in Turkey and in the former lands of the Ottoman Empire where Turkish minorities had been established in Bulgaria, Cyprus, Bosnia and Herzegovina, Georgia, Greece, Kosovo, Macedonia, and Romania...
do not celebrate Christmas. The New Year tree can be considered an example of westernised Turkish culture or Turkified European culture.

After modernisation of Turkey, the Islamic calendar
Islamic calendar
The Hijri calendar , also known as the Muslim calendar or Islamic calendar , is a lunar calendar consisting of 12 lunar months in a year of 354 or 355 days. It is used to date events in many Muslim countries , and used by Muslims everywhere to determine the proper day on which to celebrate Islamic...
and fiscal calendar were replaced by the Gregorian calendar
Gregorian calendar
The Gregorian calendar, also known as the Western calendar, or Christian calendar, is the internationally accepted civil calendar. It was introduced by Pope Gregory XIII, after whom the calendar was named, by a decree signed on 24 February 1582, a papal bull known by its opening words Inter...
, and New Year celebrations started in late 1920s. The celebrations became very popular in Turkey and Christmas trees were brought into Turkey as New Year trees. Since that, the habit of setting a New Year tree for the New Year is a traditional event in Turkey. It is usually set up between 15 December and 15 January, the mid date being New Year's Eve. Also, the habit of giving presents at Christmas has been changed to New Year presents in Turkey.

Planting an old Year tree or cây nêu is also a Vietnamese custom which is part of the springtime Tết festival. Often a bamboo pole serves as the "tree".

Hoa đào (in Northern) or Hoa mai
Ochna integerrima
Ochna integerrima , is a tree species of the family Ochnaceae. The spectacular yellow flowers of this plant make it very popular in southern Vietnam, where the plant is purchased during Tết, the traditional Vietnamese New Year...
(in Southern) and kumquat
Kumquat
Cumquats or kumquats are a group of small fruit-bearing trees in the flowering plant family Rutaceae, either forming the genus Fortunella, or placed within Citrus sensu lato...
trees are also decorated and displayed in Vietnamese homes during Tết.