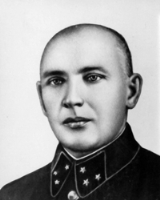 Encyclopedia
Pavel Alekseyevich Kurochkin was a Soviet
Soviet Union
The Soviet Union , officially the Union of Soviet Socialist Republics , was a constitutionally socialist state that existed in Eurasia between 1922 and 1991....
military leader.

He joined the Red Army
Red Army
The Workers' and Peasants' Red Army started out as the Soviet Union's revolutionary communist combat groups during the Russian Civil War of 1918-1922. It grew into the national army of the Soviet Union. By the 1930s the Red Army was among the largest armies in history.The "Red Army" name refers to...
in 1918. Kurochkin completed his cavalry courses in Petrograd in 1920. He graduated from the Red Army High Cavalry school in 1923, the Frunze Military Academy in 1932 and the General Staff Academy in 1940.

During the Civil War, Kurochkin saw action against General Pyotr Krasnov
Pyotr Krasnov
Pyotr Nikolayevich Krasnov , 1869 – January 17, 1947), sometimes referred to in English as Peter Krasnov, was Lieutenant General of the Russian army when the revolution broke out in 1917, and one of the leaders of the counterrevolutionary White movement afterward.- Russian Army :Pyotr Krasnov...
near Gatchina, the British-American intervention
Triple Entente
The Triple Entente was the name given to the alliance among Britain, France and Russia after the signing of the Anglo-Russian Entente in 1907....
in the north and General Nikolai Yudenich
Nikolai Nikolaevich Yudenich
Nikolai Nikolaevich Yudenich , was a commander of the Russian Imperial Army during World War I. He was a leader of the anti-communist White movement in Northwestern Russia during the Civil War.-Early life:...
in 1919. He commanded a cavalry regiment in the Polish-Soviet war
Polish-Soviet War
The Polish–Soviet War was an armed conflict between Soviet Russia and Soviet Ukraine and the Second Polish Republic and the Ukrainian People's Republic—four states in post–World War I Europe...
and was involved in the suppression of the Tambov Rebellion
Tambov Rebellion
The Tambov Rebellion which occurred between 1920 and 1921 was one of the largest and best-organized peasant rebellions challenging the Bolshevik regime during the Russian Civil War. The uprising took place in the territories of the modern Tambov Oblast and part of the Voronezh Oblast, less than...
in 1921.

In 1935 he was promoted to chief commander of a cavalry division. After the Soviet-Finnish war broke out, he took over as the commanding officer of 23rd Rifle Corps. From 1940 to 1941, he served as commander-in-chief of the 1st Army Group in Mongolia
Mongolia
Mongolia is a landlocked country in East and Central Asia. It is bordered by Russia to the north and China to the south, east and west. Although Mongolia does not share a border with Kazakhstan, its western-most point is only from Kazakhstan's eastern tip. Ulan Bator, the capital and largest...
, commanding officer of the 17th Army in Mongolia, commander-in-chief of the Transbaikal
Transbaikal
Transbaikal, Trans-Baikal, Transbaikalia , or Dauria is a mountainous region to the east of or "beyond" Lake Baikal in Russia. The alternative name, Dauria, is derived from the ethnonym of the Daur people. It stretches for almost 1000 km from north to south from the Patomskoye Plateau and North...
Military District and commander-in-chief of the Oryol
Oryol
Oryol or Orel is a city and the administrative center of Oryol Oblast, Russia, located on the Oka River, approximately south-southwest of Moscow...
Military District.

In July 1941 he was given command of the 20th Army which participated in the unsuccessful defense
Battle of Smolensk (1941)
The Battle of Smolensk was a largely successful encirclement operation by the German Army Group Centre's 2nd Panzer Group led by Heinz Guderian and the 3rd Panzer Group led by Hermann Hoth against parts of four Soviet Fronts during World War II...
of Smolensk
Smolensk
Smolensk is a city and the administrative center of Smolensk Oblast, Russia, located on the Dnieper River. Situated west-southwest of Moscow, this walled city was destroyed several times throughout its long history since it was on the invasion routes of both Napoleon and Hitler. Today, Smolensk...
.

From December 1943 until February 1944, he was the first deputy commander-in-chief of the First Ukrainian Front
1st Ukrainian Front
The 1st Ukrainian Front was a front—a force the size of a Western Army group—of the Soviet Union's Red Army during the Second World War.-Wartime:...
under Marshal Konev and was remembered for his planning of the bloody Korsun–Shevchenkovsky Offensive.

Immediately after the war, Kurochkin briefly headed the Kuban
Kuban
Kuban is a geographic region of Southern Russia surrounding the Kuban River, on the Black Sea between the Don Steppe, Volga Delta and the Caucasus...
Military District until his appointment in 1946 as first deputy commander-in-chief of the Soviet Military Administration in East Germany. After his tour in East Germany ended in 1947, he took over as an assistant commander-in-chief in the Russian Far East
Russian Far East
Russian Far East is a term that refers to the Russian part of the Far East, i.e., extreme east parts of Russia, between Lake Baikal in Eastern Siberia and the Pacific Ocean...

From 1951 to 1968, Kurochkin served in military academies, first at the Military Academy of the General Staff and later as the Commandant of the Frunze Military Academy. In 1968, he became the chairman of the Supreme Command of the United Military Forces of the Warsaw Pact
Warsaw Pact
The Warsaw Treaty Organization of Friendship, Cooperation, and Mutual Assistance , or more commonly referred to as the Warsaw Pact, was a mutual defense treaty subscribed to by eight communist states in Eastern Europe...
. Kurochkin finished his military career as a general inspector of the Ministry of Defense. He went on to become a deputy of the Supreme Soviet of the USSR and was awarded with the Order of Lenin
Order of Lenin
The Order of Lenin , named after the leader of the Russian October Revolution, was the highest decoration bestowed by the Soviet Union...
in 1980.

Kurichkin died in Moscow
Moscow
Moscow is the capital, the most populous city, and the most populous federal subject of Russia. The city is a major political, economic, cultural, scientific, religious, financial, educational, and transportation centre of Russia and the continent...
in 1989.
The source of this article is wikipedia, the free encyclopedia.  The text of this article is licensed under the GFDL.