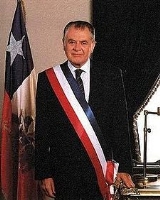 Encyclopedia
Patricio Aylwin Azócar (born November 26, 1918) was the first president
President
A president is a leader of an organization, company, trade union, university, or country.Etymologically, a president is one who presides, who sits in leadership...
of Chile
Chile
Chile ,officially the Republic of Chile , is a country in South America occupying a long, narrow coastal strip between the Andes mountains to the east and the Pacific Ocean to the west. It borders Peru to the north, Bolivia to the northeast, Argentina to the east, and the Drake Passage in the far...
after its return to democratic rule
Chilean transition to democracy
The Chilean transition to democracy began when a Constitution establishing a transition itinerary was approved in a plebiscite. From March 11, 1981 to March 11, 1990, several organic constitutional laws were approved leading to the final restoration of democracy...
in 1990, following the military dictatorship of General Augusto Pinochet
Augusto Pinochet
Augusto José Ramón Pinochet Ugarte, more commonly known as Augusto Pinochet , was a Chilean army general and dictator who assumed power in a coup d'état on 11 September 1973...
.

He is married to Leonor Oyarzun Ivanovic
Leonor Oyarzún
Leonor Oyarzún Ivanovic was First Lady of Chile and is the wife of former President Patricio Aylwin.She was born in 1922, daughter of Manuel Oyarzún Lorca and Ana Ivanovic Roccatagliata...
. They have five children (his daughter Mariana worked as a minister in subsequent governments) and 14 grandchildren (among them, popular telenovela
Telenovela
A telenovela is a limited-run serial dramatic programming popular in Latin American, Portuguese, and Spanish television programming. The word combines tele, short for televisión or televisão , and novela, a Spanish or Portuguese word for "novel"...
actress Paz Bascuñán
Paz Bascuñán
María Paz Bascuñán Aylwin , best known by her stage name of Paz Bascuñán, is a Chilean theatre, film and television actress. She is the grand-daughter of former Chilean president Patricio Aylwin Azócar and Leonor Oyarzún Ivanovic...
).

Patricio Aylwin’s involvement in politics started in 1945, when he joined the Falange Nacional. Later he was elected president of the Falange and when that party became the Christian Democrats, he served seven terms as its president between 1958 and 1989.

In 1982 Aylwin was elected vice president of the Christian Democrats. He was among the first to advocate acceptance of the Constitution
Constitution of Chile
In its temporary dispositions, the document ordered the transition from the former military government, with Augusto Pinochet as President of the Republic, and the Legislative Power of the Military Junta , to a civil one, with a time frame of eight...
as a reality in order to facilitate the return to democracy
Chilean transition to democracy
The Chilean transition to democracy began when a Constitution establishing a transition itinerary was approved in a plebiscite. From March 11, 1981 to March 11, 1990, several organic constitutional laws were approved leading to the final restoration of democracy...
. The opposition eventually met the legal standards imposed by the Pinochet regime and participated in the 1988 plebiscite.

In October 1988, Chileans voted in a presidential referendum to end General Pinochet's bid for 8 more years as president. Patricio Aylwin was at the center of the movement that defeated General Pinochet. After the plebiscite, he participated in negotiations that led the government and the opposition to agree on 54 constitutional reforms, thereby making possible a peaceful transition from 16 years of dictatorship to democracy.

Patricio Aylwin was elected
Chilean presidential election, 1989
A presidential election was held in Chile on 14 December 1989. This was one of the key events in the conclusion of the military dictatorship.-Results:Source: . -See also:*Chilean coup of 1973*Salvador Allende - deposed by 1973 coup...
president of the Republic on December 14, 1989.

He led the reconstruction of Chile and the reconciliation of its people. Although Chile had officially become a democracy, the Chilean military remained highly powerful during the presidency of Aylwin, and the Constitution
Constitution of Chile
In its temporary dispositions, the document ordered the transition from the former military government, with Augusto Pinochet as President of the Republic, and the Legislative Power of the Military Junta , to a civil one, with a time frame of eight...
ensured the continued influence of Pinochet and his commanders. This prevented his government from achieving many of the goals it had set out to achieve, such as the restructuring of the Constitutional Court and the reduction of Pinochet's political power. His administration did initiate direct municipal elections, the first of which were held in June 1992. In spite of the severe limits imposed on Aylwin's government by the Constitution, over four years it "altered power relations in its favor in the state, in civil society, and in political society."

The Aylwin Government did much to reduce poverty and inequality during its time in office. A tax reform was introduced in 1990 which boosted tax revenues by around 15%, and enabled the Alywin Government to increase government spending on social programs from 9.9% to 11.7% of GDP. By the end of the Alywin Government, unprecedented resources were being allocated to social programs, including an expanded public health programs, vocational and training programs for young Chileans, and a major public housing initiative.

A new Solidarity and Social Investment Fund was set up to direct aid towards poorer communities, and social spending (especially on health and education) increased by around one-third between 1989 and 1993. A new labor law was also enacted in 1990, which expanded trade union rights and collective bargaining, while also improving severance pay for workers. The minimum wage was also increased, as were family allowances, pensions, and other benefits. Between 1990 and 1993, real wages grew by 4.6%, while the unemployment rate fell from 7.8% to 6.5%. Spending on education increased by 40% while spending on health increased by 54%. The incomes of poor Chileans increased by 20% in real terms (above the rate of inflation) under the Aylwin Government, while increases to the minimum wage meant that it was 36% higher in real terms in 1993 than in 1990. A slum clearance program was also initiated, with over 100,000 new homes built each other under the Alywin Government, compared with 40,000 per annum under the Pinochet Government.

In education, improvements were made in the 1,500 primary schools in the poorest districts, with investment in better maintenance, increases in teacher’s salaries, and the purchasing of new books. Government scholarships were introduced that paid for books, transportation, and student’s meals, while also providing prizes like bicycles for those who excelled. For students who had to join the work force to support themselves and/or their families, work-study programs were created, contracting with employers to hire students and provide them with on-the-job training and a modest salary, subsidized by the government.

In health, funds were allocated to refurbish hospitals in the poorest areas and for improving medical treatment centers around the country, enabling them to pay their workers higher salaries and stay open for longer periods of time.


Life after the presidency

Since leaving office in 1994, he has continued his lifelong commitment to promoting justice. In 1995, he was the catalyst for a United Nations summit on poverty. He is now president of the Corporation for Democracy and Justice, a non-profit organization he founded to develop approaches to eliminating poverty and to strengthen ethical values in politics.

Aylwin has received honorary degrees from universities in Australia, Canada, Colombia, France, Italy, Japan, Portugal, Spain, the United States, and from seven Chilean universities. In 1997 the Council of Europe
Council of Europe
The Council of Europe is an international organisation promoting co-operation between all countries of Europe in the areas of legal standards, human rights, democratic development, the rule of law and cultural co-operation...
awarded the North-South Prize
North-South Prize
The North–South Prize is awarded annually by the North-South Centre of the Council of Europe to two public figures who are recognised for their deep commitment, outstanding achievements and hope they have generated in the field of protection of human rights, the defence of pluralist democracy and...
to Aylwin and Mary Robinson
Mary Robinson
Mary Therese Winifred Robinson served as the seventh, and first female, President of Ireland from 1990 to 1997, and the United Nations High Commissioner for Human Rights, from 1997 to 2002. She first rose to prominence as an academic, barrister, campaigner and member of the Irish Senate...
, former president of Ireland, for their contributions to fostering human rights, democracy, and cooperation between Europe and Latin America.