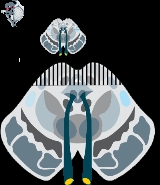 Encyclopedia
Parinaud's Syndrome, also known as dorsal midbrain syndrome is a group of abnormalities of eye movement and pupil
Pupil
The pupil is a hole located in the center of the iris of the eye that allows light to enter the retina. It appears black because most of the light entering the pupil is absorbed by the tissues inside the eye. In humans the pupil is round, but other species, such as some cats, have slit pupils. In...
dysfunction. It is caused by lesion
Lesion
A lesion is any abnormality in the tissue of an organism , usually caused by disease or trauma. Lesion is derived from the Latin word laesio which means injury.- Types :...
s of the upper brain stem
Brain stem
In vertebrate anatomy the brainstem is the posterior part of the brain, adjoining and structurally continuous with the spinal cord. The brain stem provides the main motor and sensory innervation to the face and neck via the cranial nerves...
and is named for Henri Parinaud
Henri Parinaud
Henri Parinaud was a French ophthalmologist and neurologist, most noted for his work in the field of neuro-ophthalmology.- Early life :...
(1844–1905), considered to be the father of French ophthalmology
Ophthalmology
Ophthalmology is the branch of medicine that deals with the anatomy, physiology and diseases of the eye. An ophthalmologist is a specialist in medical and surgical eye problems...
. It is also one of the clinical manifestations of Bartonella
Bartonella
Bartonella is a genus of Gram-negative bacteria. Facultative intracellular parasites, Bartonella species can infect healthy people but are considered especially important as opportunistic pathogens. Bartonella are transmitted by insect vectors such as ticks, fleas, sand flies and mosquitoes...
infection.

Parinaud's Syndrome is a cluster of abnormalities of eye movement and pupil dysfunction, characterized by:


It is also commonly associated with bilateral papilledema
Papilledema
Papilledema is optic disc swelling that is caused by increased intracranial pressure. The swelling is usually bilateral and can occur over a period of hours to weeks. Unilateral presentation is extremely rare....
. It has less commonly been associated with spasm of accommodation
Accommodation reflex
The accommodation reflex is a reflex action of the eye, in response to focusing on a near object, then looking at distant object , comprising coordinated changes in vergence, lens shape and pupil size...
on attempted upward gaze, pseudoabducens palsy (also known as thalamic esotropia
Esotropia
Esotropia is a form of strabismus, or "squint", in which one or both eyes turns inward. The condition can be constantly present, or occur intermittently, and can give the affected individual a "cross-eyed" appearance...
) or slower movements of the abducting eye than the adducting eye during horizontal saccades, see-saw nystagmus and associated ocular motility deficits including skew deviation
Skew deviation
Skew deviation is an unusual ocular deviation , wherein the eyes move upward , but in opposite directions. Skew deviation is caused by abnormal prenuclear vestibular input to the ocular motor nuclei, most commonly due to brainstem or cerebellar stroke. Other causes include multiple sclerosis and...
, oculomotor nerve
Oculomotor nerve
The oculomotor nerve is the 3rd of 12 paired cranial nerves. It enters the orbit via the superior orbital fissure and controls most of the eye's movements, including constriction of the pupil and maintaining an open eyelid by innervating the Levator palpebrae superiors muscle. The optic nerve is...
palsy, trochlear nerve
Trochlear nerve
The trochlear nerve is a motor nerve that innervates a single muscle: the superior oblique muscle of the eye....
palsy and internuclear ophthalmoplegia
Internuclear ophthalmoplegia
Internuclear ophthalmoplegia is a disorder of conjugate lateral gaze in which the affected eye shows impairment of adduction. When an attempt is made to gaze contralaterally , the affected eye adducts minimally, if at all. The contralateral eye abducts, however with nystagmus...
. 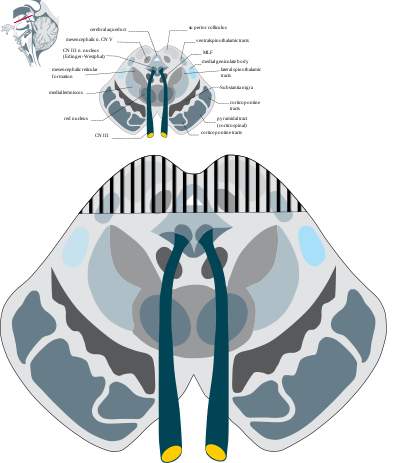 Parinaud's Syndrome results from injury, either direct or compressive, to the dorsal midbrain. Specifically, compression or ischemic damage of the mesencephalic tectum, including the superior colliculus
Superior colliculus
The optic tectum or simply tectum is a paired structure that forms a major component of the vertebrate midbrain. In mammals this structure is more commonly called the superior colliculus , but, even in mammals, the adjective tectal is commonly used. The tectum is a layered structure, with a...
adjacent oculomotor (origin of cranial nerve III) and Edinger-Westphal nuclei, causing dysfunction to the motor function of the eye.

Classically, it has been associated with three major groups:


However, any other compression, ischemia or damage to this region can produce these phenomena: obstructive hydrocephalus
Hydrocephalus
Hydrocephalus , also known as "water in the brain," is a medical condition in which there is an abnormal accumulation of cerebrospinal fluid in the ventricles, or cavities, of the brain. This may cause increased intracranial pressure inside the skull and progressive enlargement of the head,...
, midbrain hemorrhage, cerebral arteriovenous malformation
Cerebral arteriovenous malformation
A cerebral arteriovenous malformation is an abnormal connection between the arteries and veins in the brain.-Signs and symptoms:The most frequently observed problems related to an AVM are headaches and seizures while at least 15% of the population at detection have no symptoms at all...
, trauma and brainstem toxoplasmosis
Toxoplasmosis
Toxoplasmosis is a parasitic disease caused by the protozoan Toxoplasma gondii. The parasite infects most genera of warm-blooded animals, including humans, but the primary host is the felid family. Animals are infected by eating infected meat, by ingestion of feces of a cat that has itself...
infection. Neoplasms and giant aneurysms of the posterior fossa
Posterior fossa
Posterior fossa may refer to:* Posterior cranial fossa* Posterior intercondyloid fossa...
have also been associated with the midbrain syndrome.

Vertical supranuclear ophthalmoplegia has also been associated with metabolic disorders, such as Niemann-Pick disease
Niemann-Pick disease
Niemann–Pick disease refers to a group of fatal inherited metabolic disorders that are included in the larger family of lysosomal storage diseases .-Signs and symptoms:Symptoms are related to the organs in which they accumulate...
, Wilson's disease
Wilson's disease
Wilson's disease or hepatolenticular degeneration is an autosomal recessive genetic disorder in which copper accumulates in tissues; this manifests as neurological or psychiatric symptoms and liver disease...
, kernicterus
Kernicterus
Kernicterus is damage to the brain centers of infants caused by increased levels of unconjugated bilirubin. This may be due to several underlying pathologic processes. Newborn babies are often polycythemic. When they break down the erythrocytes, one of the byproducts is bilirubin, which circulates...
, and barbiturate
Barbiturate
Barbiturates are drugs that act as central nervous system depressants, and can therefore produce a wide spectrum of effects, from mild sedation to total anesthesia. They are also effective as anxiolytics, as hypnotics, and as anticonvulsants...
overdose.

The eye findings of Parinaud's Syndrome generally improve slowly over months, especially with resolution of the causative factor; continued resolution after the first 3-6 months of onset is uncommon. However, rapid resolution after normalization of intracranial pressure following placement of a ventriculoperitoneal shunt has been reported.

Treatment is primarily directed towards etiology of the dorsal midbrain syndrome. A thorough workup, including neuroimaging is essential to rule out anatomic lesions or other causes of this syndrome. Visually significant upgaze palsy can be relieved with bilateral inferior rectus recessions. Retraction nystagmus and convergence movement are usually improved with this procedure as well.
The source of this article is wikipedia, the free encyclopedia.  The text of this article is licensed under the GFDL.