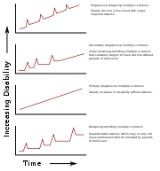 Overview
Multiple sclerosis is an inflammatory
Inflammation
Inflammation is part of the complex biological response of vascular tissues to harmful stimuli, such as pathogens, damaged cells, or irritants. Inflammation is a protective attempt by the organism to remove the injurious stimuli and to initiate the healing process...
disease in which the fatty myelin
Myelin
Myelin is a dielectric material that forms a layer, the myelin sheath, usually around only the axon of a neuron. It is essential for the proper functioning of the nervous system. Myelin is an outgrowth of a type of glial cell. The production of the myelin sheath is called myelination...
sheaths around the axon
Axon
An axon is a long, slender projection of a nerve cell, or neuron, that conducts electrical impulses away from the neuron's cell body or soma....
s of the brain
Human brain
The human brain has the same general structure as the brains of other mammals, but is over three times larger than the brain of a typical mammal with an equivalent body size. Estimates for the number of neurons in the human brain range from 80 to 120 billion...
and spinal cord
Spinal cord
The spinal cord is a long, thin, tubular bundle of nervous tissue and support cells that extends from the brain . The brain and spinal cord together make up the central nervous system...
are damaged, leading to demyelination
Demyelinating disease
A demyelinating disease is any disease of the nervous system in which the myelin sheath of neurons is damaged. This impairs the conduction of signals in the affected nerves, causing impairment in sensation, movement, cognition, or other functions depending on which nerves are involved.The term...
and scarring as well as a broad spectrum of signs and symptoms. Disease onset usually occurs in young adults, and it is more common in women. It has a prevalence
Prevalence
In epidemiology, the prevalence of a health-related state in a statistical population is defined as the total number of cases of the risk factor in the population at a given time, or the total number of cases in the population, divided by the number of individuals in the population...
that ranges between 2 and 150 per 100,000. MS was first described in 1868 by Jean-Martin Charcot
Jean-Martin Charcot
Jean-Martin Charcot was a French neurologist and professor of anatomical pathology. He is known as "the founder of modern neurology" and is "associated with at least 15 medical eponyms", including Charcot-Marie-Tooth disease and amyotrophic lateral sclerosis...
.

MS affects the ability of nerve cells in the brain and spinal cord to communicate with each other effectively.

Hi, i would like to know best possible way to diagnose for multiple sclerosis and how can we sure what result diagnose gives is real indicator of ms a...
More
x