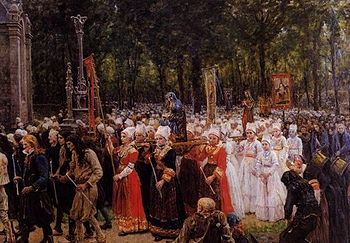 A Pardon is a penitential ceremony
Sacrament of Penance (Catholic Church)
In the teachings of the Roman Catholic Church, the Sacrament of Penance and Reconciliation is the method by which individual men and women may be freed from sins committed after receiving the sacrament of Baptism...
. A Pardon occurs on the feast of the patron saint
Patron saint
A patron saint is a saint who is regarded as the intercessor and advocate in heaven of a nation, place, craft, activity, class, clan, family, or person...
of a church or chapel, at which an indulgence
Indulgence
In Catholic theology, an indulgence is the full or partial remission of temporal punishment due for sins which have already been forgiven. The indulgence is granted by the Catholic Church after the sinner has confessed and received absolution...
is granted. Hence use of the word "Pardon". Pardons only occur in the traditionally Breton language
Breton language
Breton is a Celtic language spoken in Brittany , France. Breton is a Brythonic language, descended from the Celtic British language brought from Great Britain to Armorica by migrating Britons during the Early Middle Ages. Like the other Brythonic languages, Welsh and Cornish, it is classified as...
speaking Western part of Brittany. They do not extend farther east than Guingamp
Guingamp
Guingamp is a commune in the Côtes-d'Armor department in Brittany in northwestern France.-Population:Inhabitants of Guingamp are called guingampais.-Breton language:...
.

The faithful go on a pilgrimage either to the tomb of a saint
Saint
A saint is a holy person. In various religions, saints are people who are believed to have exceptional holiness.In Christian usage, "saint" refers to any believer who is "in Christ", and in whom Christ dwells, whether in heaven or in earth...
or a place dedicated to a saint. The locations may be associated with miraculous appearances, as in Querrien
Querrien
Querrien is a commune in the Finistère department of Brittany in northwestern France.-Population:Inhabitants of Querrien are called in French Querriennois.-Breton language:...
, or holy relic
Relic
In religion, a relic is a part of the body of a saint or a venerated person, or else another type of ancient religious object, carefully preserved for purposes of veneration or as a tangible memorial...
s.

The Pardons begin in March and end in October, but the majority of them are between Easter
Easter
Easter is the central feast in the Christian liturgical year. According to the Canonical gospels, Jesus rose from the dead on the third day after his crucifixion. His resurrection is celebrated on Easter Day or Easter Sunday...
and Michaelmas
Michaelmas
Michaelmas, the feast of Saint Michael the Archangel is a day in the Western Christian calendar which occurs on 29 September...
. Traditionally pilgrims wore their best costumes, each diocese and parish having a distinctive style, and otherwise only worn at weddings. However, traditional Breton costume is now not typically worn, except at the Locronan
Locronan
Locronan is a commune in the Finistère department of Brittany in north-western France.Locronan is a member of the [Les Plus Beaux Villages de France]] association.-The place name:...
Pardon, in honour of Saint Ronan
Ronan of Locronan
Saint Ronan is the name of an Irish pilgrim saint and hermit in western Brittany, eponymous founder of Locronan and co-patron of Quimper, together with its founder, Saint Corentin.-From Locronan to Quimper:...
. Penitents travel as a group in parish
Parish
A parish is a territorial unit historically under the pastoral care and clerical jurisdiction of one parish priest, who might be assisted in his pastoral duties by a curate or curates - also priests but not the parish priest - from a more or less central parish church with its associated organization...
es, fraternities or other corporate bodies, bringing banners, crosses and other insignia in procession, each group competing with the others for grandeur. The leader of the Pardon, typically a high ranking ecclesiastic, has the title of "pardonnor". If relics are involved, he will normally carry them during part of the procession. For most of the pilgrimage, however, this honour falls to those who were considered to be worthiest by it by the various social groups represented.

The greater part of the day is spent in prayer, and the Pardon begins with early Mass
Mass (liturgy)
"Mass" is one of the names by which the sacrament of the Eucharist is called in the Roman Catholic Church: others are "Eucharist", the "Lord's Supper", the "Breaking of Bread", the "Eucharistic assembly ", the "memorial of the Lord's Passion and Resurrection", the "Holy Sacrifice", the "Holy and...
at 4 AM. Its observance, however, has actually commenced earlier, for the preceding evening is devoted to confession
Confession
This article is for the religious practice of confessing one's sins.Confession is the acknowledgment of sin or wrongs...
, and the rosary
Rosary
The rosary or "garland of roses" is a traditional Catholic devotion. The term denotes the prayer beads used to count the series of prayers that make up the rosary...
is generally recited by the pilgrims, the whole way to the place of the Pardon. After the religious service, the great procession takes place around the church. This is the most picturesque part of the Pardon and may be regarded as its mise en scène
Mise en scène
Mise-en-scène is an expression used to describe the design aspects of a theatre or film production, which essentially means "visual theme" or "telling a story"—both in visually artful ways through storyboarding, cinematography and stage design, and in poetically artful ways through direction...
. At Ste-Anne d'Auray, this procession is especially striking. In the procession join all those who believe that the intercession of St. Anne has saved them in times of peril. Sailors will carry fragments of a vessel, upon which they escaped in a shipwreck; the once lame will carry on their shoulders crutches which they longer need; and those rescued from fire will carry the rope or ladder, by which they escaped from the flames.

The religious observances are usually followed by social events including picnics and, traditionally, wrestling matches.

The dispersal of the pilgrims until meeting at the appointed place, like the procession
Procession
A procession is an organized body of people advancing in a formal or ceremonial manner.-Procession elements:...
, symbolises the desire to obtain intercession
Intercession
Intercession is the act of interceding between two parties. In both Christian and Islamic religious usage, it is a prayer to God on behalf of others....
from the celebrated saint by offering the effort of the journey as an act of faith. This reflects the Christian
Christian
A Christian is a person who adheres to Christianity, an Abrahamic, monotheistic religion based on the life and teachings of Jesus of Nazareth as recorded in the Canonical gospels and the letters of the New Testament...
view that the human condition on this earth is a journey towards the Kingdom of heaven
Kingdom of God
The Kingdom of God or Kingdom of Heaven is a foundational concept in the Abrahamic religions: Judaism, Christianity and Islam.The term "Kingdom of God" is found in all four canonical gospels and in the Pauline epistles...
or the new promised land
Promised land
The Promised Land is a term used to describe the land promised or given by God, according to the Hebrew Bible, to the Israelites, the descendants of Jacob. The promise is firstly made to Abraham and then renewed to his son Isaac, and to Isaac's son Jacob , Abraham's grandson...
. Following this logic, the pilgrims are invited to confess their sin
Sin
In religion, sin is the violation or deviation of an eternal divine law or standard. The term sin may also refer to the state of having committed such a violation. Christians believe the moral code of conduct is decreed by God In religion, sin (also called peccancy) is the violation or deviation...
s to their priests before taking part in the mass, which is often followed by solemn vespers
Vespers
Vespers is the evening prayer service in the Western Catholic, Eastern Catholic, and Eastern Orthodox, Anglican, and Lutheran liturgies of the canonical hours...
. Once they are granted absolution
Absolution
Absolution is a traditional theological term for the forgiveness experienced in the Sacrament of Reconciliation. This concept is found in the Roman Catholic Church, as well as the Eastern Orthodox churches, the Anglican churches, and most Lutheran churches....
, the groups engage in communal festivities to express the joy of Christian redemption
Redemption (theology)
Redemption is a concept common to several theologies. It is generally associated with the efforts of people within a faith to overcome their shortcomings and achieve the moral positions exemplified in their faith.- In Buddhism :...
. This can take the form of a village fair or even resemble a funfair. 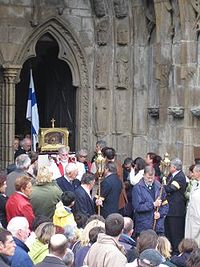 Some Pardons are held during notable religious festivals, such as the Feast of the Assumption on August 15. The Pardons dedicated to the Virgin Mary, are usually followed by those dedicated to Mary's mother, Saint Anne
Saint Anne
Saint Hanna of David's house and line, was the mother of the Virgin Mary and grandmother of Jesus Christ according to Christian and Islamic tradition. English Anne is derived from Greek rendering of her Hebrew name Hannah...
, patron saint of Brittany. However, the majority honour local saints because of their patronage role to protect specific categories of people or activities. Thus there are Pardons dedicated to Saint Gildas at the beginning of June in Trégor, to Saint Guirec
Saint Guirec
Saint Guirec , according to oral tradition, was a Welsh monk who sought to establish a monastery in Celtic Brittany. In the region of Traou-Perros is where Guirec chose to found his new community....
, patron of girls about to marry, and to the patron saints of individual parishes.

The Pardon of Saint Yves in Tréguier
Tréguier
Tréguier is a port town in the Côtes-d'Armor department in Brittany in northwestern France. It is the capital of the province of Trégor.-Geography:Tréguier is located 36 m. N.W. of Saint-Brieuc by road. The port is situated about 5½ m...
honours, though him, the legal profession, of which he is patron. Its influence is now international, since thousands of pilgrims, official or anonymous, from all the countries of the world, meet at his tomb in the parish of his birthplace, in fraternities of lawyers, judges and other legal professionals. 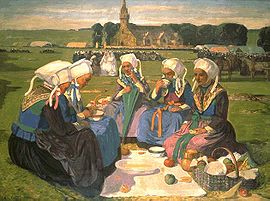 Pardons were a popular subject in 19th century French art, since the local people dressed in their elaborate traditional Breton costume for the ceremonies, which also involved open-air public festivities. Many artists came to Brittany to portray Pardons. Jules Breton and Pascal Dagnan-Bouveret
Pascal Dagnan-Bouveret
right|thumb|Pascal Dagnan-Bouveretthumb|300px|[[Breton Women at a Pardon]], 1887. [[Museu Calouste Gulbenkian]]Pascal-Adolphe-Jean Dagnan-Bouveret , was one of the leading French artists of the academic school. He was born in Paris, the son of a tailor, and was raised by his grandfather after his...
painted a number of such scenes.

Paintings by members of the Pont-Aven School
Pont-Aven School
Pont-Aven School is a term occupied by works of art iconographically due to Pont-Aven and its surroundings. Originally the term was focusing works of the artists' colony emerging there since the 1850s, and some decades later the work of the group of painters gathering around the artist Paul...
such as Paul Serusier
Paul Sérusier
Paul Sérusier was a French painter who was a pioneer of abstract art and an inspiration for the avant-garde Nabi movement, Synthetism and Cloisonnism.- Education :...
and Paul Gauguin
Paul Gauguin
Eugène Henri Paul Gauguin was a leading French Post-Impressionist artist. He was an important figure in the Symbolist movement as a painter, sculptor, print-maker, ceramist, and writer...
's Vision after the Sermon
Vision After the Sermon
Vision after the Sermon is an oil painting by French artist Paul Gauguin in 1888. It is now in the National Gallery of Scotland, Edinburgh. It depicts a scene from The Bible, where Jacob wrestles an angel. It depicts this indirectly, through a vision or hallucination that the women depicted see...
are inspired by this aspect of Breton culture.