Encyclopedia
Paphlagonia was an ancient area on the Black Sea
Black Sea
The Black Sea is bounded by Europe, Anatolia and the Caucasus and is ultimately connected to the Atlantic Ocean via the Mediterranean and the Aegean seas and various straits. The Bosphorus strait connects it to the Sea of Marmara, and the strait of the Dardanelles connects that sea to the Aegean...
coast of north central Anatolia
Anatolia
Anatolia is a geographic and historical term denoting the westernmost protrusion of Asia, comprising the majority of the Republic of Turkey...
, situated between Bithynia
Bithynia
Bithynia was an ancient region, kingdom and Roman province in the northwest of Asia Minor, adjoining the Propontis, the Thracian Bosporus and the Euxine .-Description:...
to the west and Pontus
Pontus
Pontus or Pontos is a historical Greek designation for a region on the southern coast of the Black Sea, located in modern-day northeastern Turkey. The name was applied to the coastal region in antiquity by the Greeks who colonized the area, and derived from the Greek name of the Black Sea: Πόντος...
to the east, and separated from Phrygia
Phrygia
In antiquity, Phrygia was a kingdom in the west central part of Anatolia, in what is now modern-day Turkey. The Phrygians initially lived in the southern Balkans; according to Herodotus, under the name of Bryges , changing it to Phruges after their final migration to Anatolia, via the...
(later, Galatia
Galatia
Ancient Galatia was an area in the highlands of central Anatolia in modern Turkey. Galatia was named for the immigrant Gauls from Thrace , who settled here and became its ruling caste in the 3rd century BC, following the Gallic invasion of the Balkans in 279 BC. It has been called the "Gallia" of...
) by a prolongation to the east of the Bithynian Olympus. According to Strabo
Strabo
Strabo, also written Strabon was a Greek historian, geographer and philosopher.-Life:Strabo was born to an affluent family from Amaseia in Pontus , a city which he said was situated the approximate equivalent of 75 km from the Black Sea...
, the river Parthenius
Bartin River
Bartın River , is a small river in east of Black Sea Region of Turkey. Its source is Ilgaz Mountains, in Kastamonu Province and Karabük Province, it flows to the north, passes through in Bartın and empties into the Black Sea near Boğaz village in a delta.The last 14 kilometers on the Bartın River,...
formed the western limit of the region, and it was bounded on the east by the Halys
Halys
Halys may refer to:* The Halys River in Anatolia , Turkish Kızılırmak .* In the Aeneid, Halys is a Trojan who defends Aeneas' camp from a Rutulian attack. He is killed by Turnus....
river.
The name Paphlagonia is derived in the legends from Paphlagon, a son of Phineas
Phineas
In Greek mythology, Phineas was a Phoenician King of Thrace.The name 'Phineas' or 'Phineus' may be associated with the ancient city of Phinea on the Thracian Bosphorus.-Phineas, Son of Agenor:...
. (Eustath. ad Horn. II. ii. 851, ad Dion. Per. 787; Steph. B. t.v.; Const. Porph. de Them. i. 7.)

The greater part of Paphlagonia is a rugged mountainous country, but it contains fertile valleys and produces a great abundance of hazelnuts and fruit – particularly plums, cherries and pears. The mountains are clothed with dense forests, conspicuous for the quantity of boxwood that they furnish. Hence, its coasts were occupied by Greeks from an early period. Among these, the flourishing city of Sinope
Sinop, Turkey
Sinop is a city with a population of 36,734 on İnce Burun , by its Cape Sinop which is situated on the most northern edge of the Turkish side of Black Sea coast, in the ancient region of Paphlagonia, in modern-day northern Turkey, historically known as Sinope...
, founded from Miletus
Miletus
Miletus was an ancient Greek city on the western coast of Anatolia , near the mouth of the Maeander River in ancient Caria...
about 630 BC, stood pre-eminent. Amastris
Amasra
Amasra is a small Black Sea port town in the Bartın Province, Turkey. The town is today much appreciated for its beaches and natural setting, which has made tourism the most important activity for its inhabitants...
, a few miles east of the Parthenius river, became important under the rule of the Macedonian monarchs; while Amisus
Samsun
Samsun is a city of about half a million people on the north coast of Turkey. It is the provincial capital of Samsun Province and a major Black Sea port.-Name:...
, a colony of Sinope situated a short distance east of the Halys river (and therefore not strictly in Paphlagonia as defined by Strabo), grew to become almost a rival of its parent city.

The most considerable towns of the interior were Gangra – in ancient times the capital of the Paphlagonian kings, afterwards called Germanicopolis
Germanicopolis
Germanicopolis may refer to several cities named after Germanicus:*Çankırı, Germanicopolis in ancient Paphlagonia*Ermenek, Germanicopolis in ancient Isauria*Germanicopolis , in ancient Bithynia...
, situated near the frontier of Galatia – and Pompeiopolis
Pompeiopolis
Pompeiopolis was a Roman city-state in ancient Paphlagonia, situated today in the Taşköprü district, Kastamonu, Turkey. The exact location is 45 km north of Kastamonu, to the north of Taşköprü, in the valley of the Gökırmak...
, in the valley of the Amnias river, near extensive mines of the mineral called by Strabo sandarake
Realgar
Realgar, α-As4S4, is an arsenic sulfide mineral, also known as "ruby sulphur" or "ruby of arsenic". It is a soft, sectile mineral occurring in monoclinic crystals, or in granular, compact, or powdery form, often in association with the related mineral, orpiment . It is orange-red in colour, melts...
(red arsenic or arsenic sulfide), largely exported from Sinope.

Although the Paphlagonians play scarcely any part in history, they were one of the most ancient nations of Anatolia
Anatolia
Anatolia is a geographic and historical term denoting the westernmost protrusion of Asia, comprising the majority of the Republic of Turkey...
(Iliad, ii. 851—857).

Paphlagonians were mentioned by Herodotus
Herodotus
Herodotus was an ancient Greek historian who was born in Halicarnassus, Caria and lived in the 5th century BC . He has been called the "Father of History", and was the first historian known to collect his materials systematically, test their accuracy to a certain extent and arrange them in a...
among the peoples conquered by Croesus
Croesus
Croesus was the king of Lydia from 560 to 547 BC until his defeat by the Persians. The fall of Croesus made a profound impact on the Hellenes, providing a fixed point in their calendar. "By the fifth century at least," J.A.S...
, and they sent an important contingent to the army of Xerxes
Xerxes I of Persia
Xerxes I of Persia , Ḫšayāršā, ), also known as Xerxes the Great, was the fifth king of kings of the Achaemenid Empire.-Youth and rise to power:...
in 480 BC. Xenophon
Xenophon
Xenophon , son of Gryllus, of the deme Erchia of Athens, also known as Xenophon of Athens, was a Greek historian, soldier, mercenary, philosopher and a contemporary and admirer of Socrates...
speaks of them as being governed by a prince of their own, without any reference to the neighboring satrap
Satrap
Satrap was the name given to the governors of the provinces of the ancient Median and Achaemenid Empires and in several of their successors, such as the Sassanid Empire and the Hellenistic empires....
s, a freedom perhaps due to the nature of their country, with its lofty mountain ranges and difficult passes. All these rulers appear to have borne the name Pylaimenes as a sign that they claimed descent from the chieftain of that name who figures in the Iliad
Iliad
The Iliad is an epic poem in dactylic hexameters, traditionally attributed to Homer. Set during the Trojan War, the ten-year siege of the city of Troy by a coalition of Greek states, it tells of the battles and events during the weeks of a quarrel between King Agamemnon and the warrior Achilles...
as leader of the Paphlagonians.


Under the Kingdom of Pontus

Pompey
Pompey
Gnaeus Pompeius Magnus, also known as Pompey or Pompey the Great , was a military and political leader of the late Roman Republic...
united the coastal districts of Paphlagonia, along with the greater part of Pontus, with the Roman province of Bithynia, but left the interior of the country under the native princes, until the dynasty became extinct and the whole country was incorporated into the Roman Empire
Roman Empire
The Roman Empire was the post-Republican period of the ancient Roman civilization, characterised by an autocratic form of government and large territorial holdings in Europe and around the Mediterranean....
. The name was still retained by geographers, though its boundaries are not distinctly defined by the geographer Claudius Ptolemy
Ptolemy
Claudius Ptolemy , was a Roman citizen of Egypt who wrote in Greek. He was a mathematician, astronomer, geographer, astrologer, and poet of a single epigram in the Greek Anthology. He lived in Egypt under Roman rule, and is believed to have been born in the town of Ptolemais Hermiou in the...
. Paphlagonia reappeared as a separate province in the 5th century AD (Hierocles
Hierocles (author of Synecdemus)
Hierocles or Hierokles was a Byzantine geographer of the sixth century and the attributed author of the Synecdemus or Synekdemos, which contains a table of administrative divisions of the Byzantine Empire and lists of the cities of each...
, Synecdemus
Synecdemus
The Synecdemus or Synekdemos is a geographic text, attributed to Hierocles, which contains a table of administrative divisions of the Byzantine Empire and lists of the cities of each. The work is dated to the reign of Justinian but prior to 535, as it divides the 912 listed cities in the Empire...
c. 33). In the 7th century it became part of the theme of Opsikion
Opsikion
The Opsician Theme or simply Opsikion was a Byzantine theme located in northwestern Asia Minor . Created from the imperial retinue army, the Opsikion was the largest and most prestigious of the early themes, being located closest to Constantinople...
, and later of the Bucellarian Theme
Bucellarian Theme
The Bucellarian Theme , more properly known as the Theme of the Bucellarians was a Byzantine theme in northern Asia Minor...
, before being split off ca. 820 to form a separate province
Paphlagonia (theme)
The Theme of Paphlagonia was a military-civilian province of the Byzantine Empire in the namesake region along the northern coast of Anatolia, in modern Turkey.-History:...
once again. 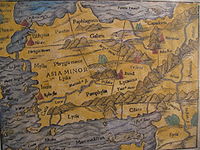