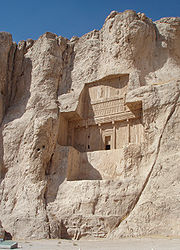 Artaxerxes I was the sixth king of kings of the Achaemenid Empire from 465 BCE to 424 BCE. He was the son of Xerxes I of Persia
Xerxes I of Persia
Xerxes I of Persia , Ḫšayāršā, ), also known as Xerxes the Great, was the fifth king of kings of the Achaemenid Empire.-Youth and rise to power:...
and Amestris
Amestris
Amestris or Amastris was the wife of Xerxes I of Persia, mother of king Artaxerxes I of Persia. She was known to have been poorly regarded by ancient Greek historians....
, daughter of Otanes.
He may have been the "Artasyrus
Artasyrus
Artasyrus an Armenian recorded as being the Satrap of Armenia during the reign of king Artaxerxes II. His son Orontes was already Satrap of Matiene during the reign of the same king, so it appears there is confusion in the historical records, which is understandable in that western sources about...
" mentioned by Herodotus
Herodotus
Herodotus was an ancient Greek historian who was born in Halicarnassus, Caria and lived in the 5th century BC . He has been called the "Father of History", and was the first historian known to collect his materials systematically, test their accuracy to a certain extent and arrange them in a...
as being a Satrap of the royal satrapy of Bactria.

In Greek sources he is also surnamed μακρόχειρ Macrocheir (Latin: Longimanus), allegedly because his right hand was longer than his left.

After Persia had been defeated at Eurymedon, military action between Greece and Persia was at a standstill. When Artaxerxes I took power, he introduced a new Persian strategy of weakening the Athenians by funding their enemies in Greece. This indirectly caused the Athenians to move the treasury of the Delian League
Delian League
The Delian League, founded in circa 477 BC, was an association of Greek city-states, members numbering between 150 to 173, under the leadership of Athens, whose purpose was to continue fighting the Persian Empire after the Greek victory in the Battle of Plataea at the end of the Greco–Persian Wars...
from the island of Delos
Delos
The island of Delos , isolated in the centre of the roughly circular ring of islands called the Cyclades, near Mykonos, is one of the most important mythological, historical and archaeological sites in Greece...
to the Athenian acropolis. This funding practice inevitably prompted renewed fighting in 450 BCE, where the Greeks attacked at the Battle of Cyprus. After Cimon's failure to attain much in this expedition, the Peace of Callias
Peace of Callias
The Peace of Callias is a purported treaty established around 449 BC between the Delian League and Persia, ending the Persian Wars. The peace was agreed as the first compromise treaty between Achaemenid Persia and a Greek city....
was agreed between Athens
Athens
Athens , is the capital and largest city of Greece. Athens dominates the Attica region and is one of the world's oldest cities, as its recorded history spans around 3,400 years. Classical Athens was a powerful city-state...
, Argos
Argos
Argos is a city and a former municipality in Argolis, Peloponnese, Greece. Since the 2011 local government reform it is part of the municipality Argos-Mykines, of which it is a municipal unit. It is 11 kilometres from Nafplion, which was its historic harbour...
and Persia in 449 BCE.

Artaxerxes I offered asylum to Themistocles
Themistocles
Themistocles ; c. 524–459 BC, was an Athenian politician and a general. He was one of a new breed of politicians who rose to prominence in the early years of the Athenian democracy, along with his great rival Aristides...
, who was the winner of the Battle of Salamis
Battle of Salamis
The Battle of Salamis was fought between an Alliance of Greek city-states and the Persian Empire in September 480 BCE, in the straits between the mainland and Salamis, an island in the Saronic Gulf near Athens...
, after Themistocles was ostracized from Athens
Athens
Athens , is the capital and largest city of Greece. Athens dominates the Attica region and is one of the world's oldest cities, as its recorded history spans around 3,400 years. Classical Athens was a powerful city-state...
and Artaxerxes I gave him Magnesia
Magnesia on the Maeander
Magnesia or Magnesia on the Maeander was an ancient Greek city in Anatolia, considerable in size, at an important location commercially and strategically in the triangle of Priene, Ephesus and Tralles. The city was named Magnesia, after the Magnetes from Thessaly who settled the area along with...
, Myus
Myus
Myus, Caria was an ancient city-state and was one of twelve major settlements formed in the Ionian Confederation, called the Ionian League. The city was said to have been founded by Cyaretus , a son of Codrus. Myus was a small peninsula, it is now however surrounded by land...
and Lampsacus
Lampsacus
Lampsacus was an ancient Greek city strategically located on the eastern side of the Hellespont in the northern Troad. An inhabitant of Lampsacus was called a Lampsacene. The name has been transmitted in the nearby modern town of Lapseki.-Ancient history:...
to maintain him in bread, meat and wine, Palaescepsis to provide him with clothes and he gave him Percote
Percote
Percote was a town or city on the southern side of the Hellespont, to the northeast of Troy. Percote is mentioned a few times in Greek mythology, where it plays a very minor role each time. It was said to be the home of a notable seer named Merops, also its ruler...
with bedding for his house.


Portrayal in the Book of Ezra and Nehemiah

Artaxerxes commissioned Ezra
Ezra
Ezra , also called Ezra the Scribe and Ezra the Priest in the Book of Ezra. According to the Hebrew Bible he returned from the Babylonian exile and reintroduced the Torah in Jerusalem...
, a Jewish priest-scribe, by means of a letter of decree, to take charge of the ecclesiastical and civil affairs of the Jewish nation. A copy of this decree may be found in
.

Ezra
Ezra
Ezra , also called Ezra the Scribe and Ezra the Priest in the Book of Ezra. According to the Hebrew Bible he returned from the Babylonian exile and reintroduced the Torah in Jerusalem...
thereby left Babylon in the first month of the seventh year (~ 457 BCE) of Artaxerxes' reign, at the head of a company of Jews that included priests and Levites. They arrived in Jerusalem on the first day of the fifth month of the seventh year (Hebrew Calendar
Hebrew calendar
The Hebrew calendar , or Jewish calendar, is a lunisolar calendar used today predominantly for Jewish religious observances. It determines the dates for Jewish holidays and the appropriate public reading of Torah portions, yahrzeits , and daily Psalm reading, among many ceremonial uses...
).

The rebuilding of the Jewish community in Jerusalem had begun under Cyrus the Great
Cyrus the Great
Cyrus II of Persia , commonly known as Cyrus the Great, also known as Cyrus the Elder, was the founder of the Achaemenid Empire. Under his rule, the empire embraced all the previous civilized states of the ancient Near East, expanded vastly and eventually conquered most of Southwest Asia and much...
, who had permitted Jews held captive in Babylon, to return to Jerusalem and rebuild the Temple of Solomon. Consequently, a number of Jews returned to Jerusalem in 538 B.C., and the foundation of this "Second Temple" was laid the following year.

Roger Williams
Roger Williams (theologian)
Roger Williams was an English Protestant theologian who was an early proponent of religious freedom and the separation of church and state. In 1636, he began the colony of Providence Plantation, which provided a refuge for religious minorities. Williams started the first Baptist church in America,...
, a seventeenth-century Christian minister and founder of Rhode Island
Rhode Island
The state of Rhode Island and Providence Plantations, more commonly referred to as Rhode Island , is a state in the New England region of the United States. It is the smallest U.S. state by area...
, interpreted several passages in the Old and New Testament to support limiting government interference in religious matters. Williams published The Bloudy Tenent of Persecution, describing his analysis of why a civil government should be separate from religion according to the Bible. Williams believed that Israel was a unique covenant kingdom and not an appropriate model for New Testament Christians who believed that the Old Testament covenant had been fulfilled. Therefore, the more informative Old Testament examples of civil government were "good" non-covenant kings such as Artaxerxes
Artaxerxes
Artaxerxes may refer to:The throne name of several Achaemenid rulers of the 1st Persian Empire:* Artaxerxes I of Persia, Artaxerxes I Longimanus, r. 465–424 BC, son and successor of Xerxes I...
, who tolerated the Jews and did not insist that they follow his state religion.

By Alogyne of Babylon
Babylon
Babylon was an Akkadian city-state of ancient Mesopotamia, the remains of which are found in present-day Al Hillah, Babil Province, Iraq, about 85 kilometers south of Baghdad...

By Andia of Babylon
By another(?) unknown wife
By various wives eleven other children