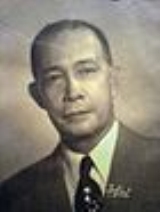 Encyclopedia
The Pangasinan are the eighth largest Filipino ethnolinguistic group
Ethnic groups in the Philippines
The Philippine islands are inhabited by number of different ethnic groups. The majority of the population is composed of ethnolinguistic groups whose languages are Austronesian in origin. Many of these groups converted to Christianity, and adopted many foreign elements of culture...
. They are the residents or indigenous peoples
Indigenous peoples
Indigenous peoples are ethnic groups that are defined as indigenous according to one of the various definitions of the term, there is no universally accepted definition but most of which carry connotations of being the "original inhabitants" of a territory....
of the Province of Pangasinan
Pangasinan
Pangasinan is a province of the Republic of the Philippines. The provincial capital is Lingayen. Pangasinan is located on the west central and peripheral area of the island of Luzon along the Lingayen Gulf, with the total land area being 5,368.82 square kilometers . According to the latest census,...
, one of the provinces
Provinces of the Philippines
The Provinces of the Philippines are the primary political and administrative divisions of the Philippines. There are 80 provinces at present, further subdivided into component cities and municipalities. The National Capital Region, as well as independent cities, are autonomous from any provincial...
of the Republic of the Philippines
Philippines
The Philippines , officially known as the Republic of the Philippines , is a country in Southeast Asia in the western Pacific Ocean. To its north across the Luzon Strait lies Taiwan. West across the South China Sea sits Vietnam...
, located on the west central area in the island of Luzon
Luzon
Luzon is the largest island in the Philippines. It is located in the northernmost region of the archipelago, and is also the name for one of the three primary island groups in the country centered on the Island of Luzon...
along Lingayen Gulf
Lingayen Gulf
The Lingayen Gulf is an extension of the South China Sea on Luzon in the Philippines stretching . It is framed by the provinces of Pangasinan and La Union and sits between the Zambales Mountains and the Cordillera Central...
. The term Pangasinan can also refer to the indigenous
Indigenous language
An indigenous language or autochthonous language is a language that is native to a region and spoken by indigenous peoples but has been reduced to the status of a minority language. This language would be from a linguistically distinct community that has been settled in the area for many generations...
speakers of the Pangasinan language
Pangasinan language
The Pangasinan language or Pangasinense is one of the twelve major languages in the Philippines....
, or people of Pangasinan heritage.

The estimated population of the Pangasinan people in the province of Pangasinan is 1.5 million. The rest of the population of the province are mostly Ilocanos
Ilocano people
The Ilocano or Ilokano people are the third largest Filipino ethnolinguistic group. Aside from being referred to as Ilocanos, from "i"-from, and "looc"-bay, they also refer to themselves as Samtoy, from the Ilocano phrase "sao mi ditoy", meaning 'our language here.' The word "Ilocano" came from...
and Sambal
Sambal people
The Sambal are a Filipino ethnolinguistic group living primarily in the province of Zambales, the city of Olongapo, and the Pangasinense municipalities of Bolinao and Anda...
.

Urduja
Urduja
Urduja is a legendary warrior princess who is recognized as a heroine in Pangasinan, Philippines. The name Urduja appears to be Sanskrit in origin, and a variation of the name "Udaya", meaning "arise" or "rising sun", or the name "Urja", meaning "breath"...
was a legendary woman warrior who is regarded as a heroine in Pangasinan. Malong and Palaris fought for independence from Spanish rule. The first president of the Philippines
Philippines
The Philippines , officially known as the Republic of the Philippines , is a country in Southeast Asia in the western Pacific Ocean. To its north across the Luzon Strait lies Taiwan. West across the South China Sea sits Vietnam...
of Pangasinan origin (and the first Protestant Philippine president), Fidel V. Ramos
Fidel V. Ramos
Fidel "Eddie" Valdez Ramos , popularly known as FVR, was the 12th President of the Philippines from 1992 to 1998. During his six years in office, Ramos was widely credited and admired by many for revitalizing and renewing international confidence in the Philippine economy.Prior to his election as...
, was elected in 1992. Other prominent people of Pangasinan descent include lawmaker Jose de Venecia, Jr.
Jose de Venecia, Jr.
Jose Claveria de Venecia, Jr. also known as JDV or Joe De V is a former Speaker of the House of Representatives of the Philippines, serving from 1992 to 1998 and from 2001 to 2008. As Speaker, he was the fourth highest ranking official of the Philippines. He was the former president of the...
, who was born in Dagupan City, Pangasinan; and the late actor and presidential candidate Fernando Poe, Jr.
Fernando Poe, Jr.
Ronald Allan Poe y Kelley , better known as Fernando Poe, Jr. and colloquially known as FPJ and Da King, was a Filipino actor and cultural icon. From the 1950s, Poe played steadfast film heroes who fight for the common man, which won him respect and admiration...
, whose father was from San Carlos City, Pangasinan.