Encyclopedia
The Panathinaiko or Panathenaic Stadium , also known as the Kallimarmaro (Καλλιμάρμαρο, i.e. the "beautifully marbled"), is an athletic stadium in Athens
Athens
Athens , is the capital and largest city of Greece. Athens dominates the Attica region and is one of the world's oldest cities, as its recorded history spans around 3,400 years. Classical Athens was a powerful city-state...
that hosted the first modern Olympic Games
Olympic Games
The Olympic Games is a major international event featuring summer and winter sports, in which thousands of athletes participate in a variety of competitions. The Olympic Games have come to be regarded as the world’s foremost sports competition where more than 200 nations participate...
in 1896. Reconstructed from the remains of the ancient Greek
Ancient Greece
Ancient Greece is a civilization belonging to a period of Greek history that lasted from the Archaic period of the 8th to 6th centuries BC to the end of antiquity. Immediately following this period was the beginning of the Early Middle Ages and the Byzantine era. Included in Ancient Greece is the...
stadium, the Panathinaiko is the only major stadium in the world built entirely of white marble
Marble
Marble is a metamorphic rock composed of recrystallized carbonate minerals, most commonly calcite or dolomite.Geologists use the term "marble" to refer to metamorphosed limestone; however stonemasons use the term more broadly to encompass unmetamorphosed limestone.Marble is commonly used for...
(from Mount Penteli) and one of the oldest stadiums in the world.

In ancient times, it was used to host the athletic portion of the Panathenaic Games
Panathenaic Games
The Panathenaic Games were held every four years in Athens in Ancient Greece since 566 BC. They continued into the third century AD. These Games incorporated religious festival, ceremony , athletic competitions, and cultural events hosted within a stadium.-Religious festival:The games were part of...
, in honour of the Goddess Athena
Athena
In Greek mythology, Athena, Athenê, or Athene , also referred to as Pallas Athena/Athene , is the goddess of wisdom, courage, inspiration, civilization, warfare, strength, strategy, the arts, crafts, justice, and skill. Minerva, Athena's Roman incarnation, embodies similar attributes. Athena is...
. During classical times, the stadium had wooden seating. It was remade in marble, by the archon
Archon
Archon is a Greek word that means "ruler" or "lord", frequently used as the title of a specific public office. It is the masculine present participle of the verb stem ἀρχ-, meaning "to rule", derived from the same root as monarch, hierarchy, and anarchy.- Ancient Greece :In ancient Greece the...
Lycurgus
Lycurgus of Athens
Lycurgus was a logographer in Ancient Greece. He was one of the ten Attic orators included in the "Alexandrian Canon" compiled by Aristophanes of Byzantium and Aristarchus of Samothrace in the third century BCE.Lycurgus was born at Athens about 396 BC, and was the son of Lycophron, who belonged...
, in 329 BC and was enlarged and renovated by Herodes Atticus
Herodes Atticus
Lucius Vibullius Hipparchus Tiberius Claudius Atticus Herodes, otherwise known as Herodes Atticus was a very distinguished, rich Greek aristocrat who served as a Roman Senator and a Sophist. He is notable as a proponent in the Second Sophistic by Philostratus.-Ancestry and Family:Herodes Atticus...
, in 140 AD, to a seated capacity of 50,000. The remnants of the ancient structure were excavated and refurbished, with funds provided by Evangelis Zappas for the revival of the Olympic Games. Evangelis Zappas sponsored the Olympic Games
Zappas Olympics
The Zappas Olympics , simply called Olympics at the time, were a series of athletic events held in Athens, Greece, in 1859, 1870, and 1875 sponsored by the Greek businessman Evangelis Zappas. These games were the first revival of the ancient Olympic Games in the modern era...
that were held there in 1870 and 1875. The stadium was refurbished a second time in 1895 for the 1896 Olympics, with completion funding provided by the Greek benefactor George Averoff
George Averoff
George M. Averoff , alternately Georgios Averof , was a Greek businessman and philanthropist of Aromanian origin....
(whose marble statue now stands at the entrance), based on designs by architects Anastasios Metaxas
Anastasios Metaxas
Anastasios Metaxas was a Greek architect and shooter.Metaxas is best known for being the architect chosen by George Averoff to restore the Panathinaiko Stadium for the 1896 Summer Olympics in Athens, the birth of the modern Olympic movement, while the design was from Ernst Ziller. He also competed...
and Ernst Ziller
Ernst Ziller
Ernst Moritz Theodor Ziller was a Saxon architect who later became a Greek national, and in the late 19th and early 20th centuries was a major designer of royal and municipal buildings in Athens, Patras and other Greek cities.- Buildings :* Presidential Mansion, Athens* National Theatre of...
.

The stadium was built long before dimensions for athletics venues were standardized and its track and layout follow the ancient hairpin-like model. 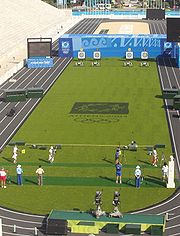 The Fokianos sports facility lies across Vasileos Konstantinou Avenue, and adjacent to it are located the Athens tennis club, the Ethnikos athletics track, the Federation swimming pool, the remnants of the Temple of Olympian Zeus, and Hadrian's Gate. Until the late 19th century and the containment of the Ilissos riverbed, the area was reedy and often flooded, and was called the "Vatrahonisi" (Frog Island).

In more recent years, the stadium has been often used to honour the homecoming of victorious Greek athletes, most notably the Greek national football team
Greece national football team
The Greece national football team represents Greece in association football and is controlled by the Hellenic Football Federation, the governing body for football in Greece. Greece's home ground is Karaiskakis Stadium in Piraeus and their head coach is Fernando Santos...
, after its victory at the 2004 European Football Championship and also the opening ceremony of the World Athletics Championships in 1997, on a concept by composer Vangelis
Vangelis
Evangelos Odysseas Papathanassiou is a Greek composer of electronic, progressive, ambient, jazz, pop rock and orchestral music, under the artist name Vangelis...
Papathanasiou.

On rare occasions, the stadium has also been used as a venue for select musical performances. Among those include Bob Dylan
Bob Dylan
Bob Dylan is an American singer-songwriter, musician, poet, film director and painter. He has been a major and profoundly influential figure in popular music and culture for five decades. Much of his most celebrated work dates from the 1960s when he was an informal chronicler and a seemingly...
, Depeche Mode
Depeche Mode
Depeche Mode are an English electronic music band formed in 1980 in Basildon, Essex. The group's original line-up consisted of Dave Gahan , Martin Gore , Andy Fletcher and Vince Clarke...
, Tina Turner
Tina Turner
Tina Turner is an American singer and actress whose career has spanned more than 50 years. She has won numerous awards and her achievements in the rock music genre have led many to call her the "Queen of Rock 'n' Roll".Turner started out her music career with husband Ike Turner as a member of the...
, Black Sabbath
Black Sabbath
Black Sabbath are an English heavy metal band, formed in Aston, Birmingham in 1969 by Ozzy Osbourne , Tony Iommi , Geezer Butler , and Bill Ward . The band has since experienced multiple line-up changes, with Tony Iommi the only constant presence in the band through the years. A total of 22...
and Sakis Rouvas
Sakis Rouvas
Anastasios "Sakis" Rouvas II , often referred to mononymously as Sakis, is a Greek musician, television and film artist, businessman, and former pole vaulter who is one of the most successful and influential entertainers of all time in Greece and Cyprus...
.

On July 1, 2009, recording artist Sakis Rouvas made history, with a sold-out benefit concert, for the environment (coinciding with the first day of the Greek public ban on smoking), with an audience of 50,000–the largest audience ever at the stadium, for a musical event and among the largest concert of all time, by a Greek artist. 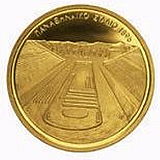 The Panathenaic Stadium was recently selected as the main motif for a high value euro collectors' coin; the €100 Greek The Panathenaic Stadium commemorative coin, minted in 2003 to commemorate the 2004 Olympics. In the obverse of the coin, the stadium is depicted. It is also shown on the obverse of all Olympic medals that have been awarded for the 2004 Olympics and was also used for the following Summer Olympics
2008 Summer Olympics
The 2008 Summer Olympics, officially known as the Games of the XXIX Olympiad, was a major international multi-sport event that took place in Beijing, China, from August 8 to August 24, 2008. A total of 11,028 athletes from 204 National Olympic Committees competed in 28 sports and 302 events...
in Beijing
Beijing
Beijing , also known as Peking , is the capital of the People's Republic of China and one of the most populous cities in the world, with a population of 19,612,368 as of 2010. The city is the country's political, cultural, and educational center, and home to the headquarters for most of China's...
.
The source of this article is wikipedia, the free encyclopedia.  The text of this article is licensed under the GFDL.