Encyclopedia
The Zappeion is a building in the National Gardens of Athens
National Gardens of Athens
The National Garden is a public park of in the center of the Greek capital, Athens. It is located directly behind the Greek Parliament building and continues to the South to the area where the Zappeion is located, across from the Panathenaiko or Kalimarmaro Olympic Stadium of the 1896 Olympic...
in the heart of Athens, Greece. It is generally used for meetings and ceremonies, both official and private.

A number of historical events have taken place at the Zappeion, including the signing of the documents formalizing Greece's accession to the European Union
European Union
The European Union is an economic and political union of 27 independent member states which are located primarily in Europe. The EU traces its origins from the European Coal and Steel Community and the European Economic Community , formed by six countries in 1958...
on 1 January 1981, which took place in the building's marble
Marble
Marble is a metamorphic rock composed of recrystallized carbonate minerals, most commonly calcite or dolomite.Geologists use the term "marble" to refer to metamorphosed limestone; however stonemasons use the term more broadly to encompass unmetamorphosed limestone.Marble is commonly used for...
-clad, peristyle
Peristyle
In Hellenistic Greek and Roman architecture a peristyle is a columned porch or open colonnade in a building surrounding a court that may contain an internal garden. Tetrastoon is another name for this feature...
main atrium
Atrium (architecture)
In modern architecture, an atrium is a large open space, often several stories high and having a glazed roof and/or large windows, often situated within a larger multistory building and often located immediately beyond the main entrance doors...
.

The head of Evangelos Zappas is buried underneath his statue which is located just outside the Zappeion. 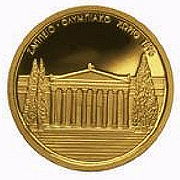 The Zappeion is currently being used as a Conference and Exhibition Center for both public and private purposes.

The Zappeion was recently selected as main motif for a high value euro collectors' coins; the €100 Greek The Olympic Village Zappeion commemorative coin, minted in 2003 to commemorate the 2004 Summer Olympics
2004 Summer Olympics
The 2004 Summer Olympic Games, officially known as the Games of the XXVIII Olympiad, was a premier international multi-sport event held in Athens, Greece from August 13 to August 29, 2004 with the motto Welcome Home. 10,625 athletes competed, some 600 more than expected, accompanied by 5,501 team...
. In the obverse of the coin, a front view of the building is depicted.