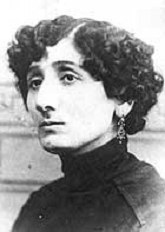 Pamphylia Tanailidi, often spelled as Panfilia Tanailidi (1891, Bashkand
Mutsk
Mutsk is a village and rural community in the Syunik Province of Armenia. The National Statistical Service of the Republic of Armenia reported its population was 375 in 2010, down from 376 at the 2001 census....
– 15 October 1937, Baku
Baku
Baku , sometimes spelled as Baki or Bakou, is the capital and largest city of Azerbaijan, as well as the largest city on the Caspian Sea and of the Caucasus region. It is located on the southern shore of the Absheron Peninsula, which projects into the Caspian Sea. The city consists of two principal...
) was an Azerbaijan
Azerbaijan
Azerbaijan , officially the Republic of Azerbaijan is the largest country in the Caucasus region of Eurasia. Located at the crossroads of Western Asia and Eastern Europe, it is bounded by the Caspian Sea to the east, Russia to the north, Georgia to the northwest, Armenia to the west, and Iran to...
i actress of Pontic Greek
Pontic Greeks
The Pontians are an ethnic group traditionally living in the Pontus region, the shores of Turkey's Black Sea...
origin.

Tanailidi was born in the village of Bashkand (then Zangezur
Zangezur
Zangezur may refer to:* Syunik, alternative name of an Armenian geographic-historic region, nowadays one of the provinces of Armenia* Kapan, former name of a city in Armenia...
district, Elisabethpol Governorate
Elisabethpol Governorate
Elisabethpol Governorate or Elizavetpol Governorate was one of the guberniyas of the Russian Empire, with its centre in Elisabethpol . Its area was 44,136 sq. kilometres, and it had 878,415 inhabitants by 1897....
of Russia
Russia
Russia or , officially known as both Russia and the Russian Federation , is a country in northern Eurasia. It is a federal semi-presidential republic, comprising 83 federal subjects...
; nowadays the village of Mutsk, Syunik
Syunik
Syunik is the southernmost province of Armenia. It borders the Vayots Dzor marz to the north, Azerbaijan's Nakhchivan exclave to the west, Karabakh to the east, and Iran to the south. Its capital is Kapan. Other important cities and towns include Goris, Sisian, Meghri, Agarak, and Dastakert...
province, Armenia
Armenia
Armenia , officially the Republic of Armenia , is a landlocked mountainous country in the Caucasus region of Eurasia...
) to a family of émigrés from Kars
Kars
Kars is a city in northeast Turkey and the capital of Kars Province. The population of the city is 73,826 as of 2010.-Etymology:As Chorzene, the town appears in Roman historiography as part of ancient Armenia...
. She first appeared on stage in 1905 as an Azeri drama trouper in Tiflis (the troupe was reorganized into the Tbilisi Azeri Drama Theatre in 1922), where she acted in plays by Hajibeyov
Uzeyir Hajibeyov
Uzeyir bey Abdul Hussein oglu Hajibeyov was an Azerbaijani and Soviet composer, conductor, publicist, playwright, teacher, translator, and social figure from Azerbaijan. He is recognized as the father of Azerbaijani classical music and opera...
, Jabbarli, Shakespeare, etc. in both Azeri and Greek languages. At that time, Tanailidi was often credited as Surayya of Zangezur (Azeri: Sürəyya Zəngəzurlu). In 1917, she toured Iran
Iran
Iran , officially the Islamic Republic of Iran , is a country in Southern and Western Asia. The name "Iran" has been in use natively since the Sassanian era and came into use internationally in 1935, before which the country was known to the Western world as Persia...
along with prominent Azeri actors of the time. Playing the part of Asya in Hajibeyov's Arshin Mal Alan musical comedy in 1919 brought her great success. In 1924, she settled in Baku and started working at the Azerbaijan State Drama Theatre. Later she starred in the movies Ismat (1934) and Almaz (1936).

In 1937, Pamphylia Tanailidi was accused by the Soviet government of being an Iranian spy
SPY
SPY is a three-letter acronym that may refer to:* SPY , ticker symbol for Standard & Poor's Depositary Receipts* SPY , a satirical monthly, trademarked all-caps* SPY , airport code for San Pédro, Côte d'Ivoire...
. Her close friendship with Govhar Aliyeva (Azerbaijani actress and Tanailidi's co-trouper, who emigrated to Iran
Iran
Iran , officially the Islamic Republic of Iran , is a country in Southern and Western Asia. The name "Iran" has been in use natively since the Sassanian era and came into use internationally in 1935, before which the country was known to the Western world as Persia...
upon Azerbaijan's Sovietization
Sovietization
Sovietization is term that may be used with two distinct meanings:*the adoption of a political system based on the model of soviets .*the adoption of a way of life and mentality modelled after the Soviet Union....
in 1920) and Ahmed Triniq (Albania
Albania
Albania , officially known as the Republic of Albania , is a country in Southeastern Europe, in the Balkans region. It is bordered by Montenegro to the northwest, Kosovo to the northeast, the Republic of Macedonia to the east and Greece to the south and southeast. It has a coast on the Adriatic Sea...
n-born journalist, who was imprisoned in 1936 and committed suicide a year later) was considered enough evidence to condemn her of espionage. Tanailidi refused to plead guilty. After a fifteen minute trial, she was given the death sentence, and on 15 October 1937 she was executed by firing squad. The location of her burial place remains unknown even today.

In 1957, Pamphylia Tanailidi was officially exonerated.