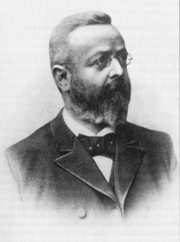 Johann Otto Leonhard Heubner (January 21, 1843 – October 17, 1926) was a German internist and pediatrician who was a native of Mühltroff
Mühltroff
Mühltroff is a town in the Vogtlandkreis district, in the Free State of Saxony, Germany. It is situated 10 km southeast of Schleiz, and 16 km northwest of Plauen.- References :...
.

He studied medicine at the University of Leipzig
University of Leipzig
The University of Leipzig , located in Leipzig in the Free State of Saxony, Germany, is one of the oldest universities in the world and the second-oldest university in Germany...
, and in 1867 became an assistant to Carl Reinhold August Wunderlich
Carl Reinhold August Wunderlich
Carl Reinhold August Wunderlich was a German physician, pioneer psychiatrist, and medical professor...
(1815-1877) at Leipzig
Leipzig
Leipzig Leipzig has always been a trade city, situated during the time of the Holy Roman Empire at the intersection of the Via Regia and Via Imperii, two important trade routes. At one time, Leipzig was one of the major European centres of learning and culture in fields such as music and publishing...
. He later founded a children’s hospital and clinic in Leipzig, and in 1891 was appointed to the chair of pediatrics
Pediatrics
Pediatrics or paediatrics is the branch of medicine that deals with the medical care of infants, children, and adolescents. A medical practitioner who specializes in this area is known as a pediatrician or paediatrician...
. In 1894 he moved to Berlin
Berlin
Berlin is the capital city of Germany and is one of the 16 states of Germany. With a population of 3.45 million people, Berlin is Germany's largest city. It is the second most populous city proper and the seventh most populous urban area in the European Union...
and became director of the children’s clinic and polyclinic at the Charité
Charité
The Charité - Universitätsmedizin Berlin is the medical school for both the Humboldt University and the Free University of Berlin. After the merger with their fourth campus in 2003, the Charité is one of the largest university hospitals in Europe....
.

Heubner is considered one of the fathers of pediatric medicine. He also made important contributions to the treatment of infectious and gastrointestinal diseases. He was instrumental in improving infant mortality
Infant mortality
Infant mortality is defined as the number of infant deaths per 1000 live births. Traditionally, the most common cause worldwide was dehydration from diarrhea. However, the spreading information about Oral Re-hydration Solution to mothers around the world has decreased the rate of children dying...
at the Charité, and introduced aseptic practices into the hospital environment. With Max Rubner
Max Rubner
Max Rubner [ru:bner] was a German physiologist and hygienist.He studied at the University of Munich under Adolf von Baeyer and Carl von Voit . Afterwards he taught as a professor at the University of Marburg and the Robert Koch Institute of Hygiene at the University of Berlin...
(1854-1932) he investigated energy metabolism in infants, creating the concept of a nutrition
Nutrition
Nutrition is the provision, to cells and organisms, of the materials necessary to support life. Many common health problems can be prevented or alleviated with a healthy diet....
quotient. With Eduard Heinrich Henoch
Eduard Heinrich Henoch
Eduard Heinrich Henoch was a German physician. He taught at the Berlin University .-Work:...
(1820-1910), he was among the first to use an antitoxin
Antitoxin
An antitoxin is an antibody with the ability to neutralize a specific toxin. Antitoxins are produced by certain animals, plants, and bacteria. Although they are most effective in neutralizing toxins, they can kill bacteria and other microorganisms. Antitoxins are made within organisms, but can be...
for diphtheria
Diphtheria
Diphtheria is an upper respiratory tract illness caused by Corynebacterium diphtheriae, a facultative anaerobic, Gram-positive bacterium. It is characterized by sore throat, low fever, and an adherent membrane on the tonsils, pharynx, and/or nasal cavity...
that had recently been developed by Emil von Behring (1854-1917).

He provided an early description of syphilitic
Syphilis
Syphilis is a sexually transmitted infection caused by the spirochete bacterium Treponema pallidum subspecies pallidum. The primary route of transmission is through sexual contact; however, it may also be transmitted from mother to fetus during pregnancy or at birth, resulting in congenital syphilis...
endarteritis obliterans, which is sometimes referred to as "Heubner's disease". His name is also lent to "Heubner's artery", a cerebral artery that typically originates from the junction of the A 1 and A 2 segments of the anterior cerebral artery (ACA). Heubner also made contributions in the study of cerebrospinal meningitis
Meningitis
Meningitis is inflammation of the protective membranes covering the brain and spinal cord, known collectively as the meninges. The inflammation may be caused by infection with viruses, bacteria, or other microorganisms, and less commonly by certain drugs...
.

In 1999 the Otto Heubner Centrum für Kinder- und Jugendmedizin was founded at the University Hospital of the Charité-Berlin as a care center for young children and adolescents.
The source of this article is wikipedia, the free encyclopedia.  The text of this article is licensed under the GFDL.