Encyclopedia
Ortona is a coastal town and municipality
Municipality
A municipality is essentially an urban administrative division having corporate status and usually powers of self-government. It can also be used to mean the governing body of a municipality. A municipality is a general-purpose administrative subdivision, as opposed to a special-purpose district...
of the Province of Chieti
Province of Chieti
The Province of Chieti is a province in the Abruzzo region of Italy. Its capital is the city of Chieti.It has an area of 2,588 km², and a total population of 381,993...
in the Italian
Italy
Italy , officially the Italian Republic languages]] under the European Charter for Regional or Minority Languages. In each of these, Italy's official name is as follows:;;;;;;;;), is a unitary parliamentary republic in South-Central Europe. To the north it borders France, Switzerland, Austria and...
region of Abruzzo, with some 23,000 inhabitants.

Ortona was the site of fierce fighting between German and Canadian forces during the Italian campaign
Italian Campaign (World War II)
The Italian Campaign of World War II was the name of Allied operations in and around Italy, from 1943 to the end of the war in Europe. Joint Allied Forces Headquarters AFHQ was operationally responsible for all Allied land forces in the Mediterranean theatre, and it planned and commanded the...
in World War II
World War II
World War II, or the Second World War , was a global conflict lasting from 1939 to 1945, involving most of the world's nations—including all of the great powers—eventually forming two opposing military alliances: the Allies and the Axis...
. The ferocity of the battle led it to be known as the "Little Stalingrad
Battle of Stalingrad
The Battle of Stalingrad was a major battle of World War II in which Nazi Germany and its allies fought the Soviet Union for control of the city of Stalingrad in southwestern Russia. The battle took place between 23 August 1942 and 2 February 1943...
" as Winston Churchill
Winston Churchill
Sir Winston Leonard Spencer-Churchill, was a predominantly Conservative British politician and statesman known for his leadership of the United Kingdom during the Second World War. He is widely regarded as one of the greatest wartime leaders of the century and served as Prime Minister twice...
called this city, (See Battle of Ortona
Battle of Ortona
The Battle of Ortona was a small, yet extremely fierce, battle fought between a battalion of German Fallschirmjäger from the German 1st Parachute Division under Generalleutnant Richard Heidrich, and assaulting Canadian forces from the 1st Canadian Infantry Division under Major General Chris Vokes...
).

The origins of Ortona are uncertain. Presumably, it was first inhabited by the Frentani
Frentani
The Frentani were an ancient people of central Italy, occupying the tract on the east coast of the peninsula from the Apennines to the Adriatic, and from the frontiers of Apulia to those of the Marrucini. They were bounded on the west by the Samnites, with whom they were closely connected, and from...
, an Italic population. In 2005, during works near the Castle, a Bronze Age
Bronze Age
The Bronze Age is a period characterized by the use of copper and its alloy bronze as the chief hard materials in the manufacture of some implements and weapons. Chronologically, it stands between the Stone Age and Iron Age...
settlement was discovered, and the Roman town largely coincided with this first settlement. Some sections of paved roads and urban walls, as well as some archaeological findings are the only remains of this period. Ortona remained a part of the Roman Empire
Roman Empire
The Roman Empire was the post-Republican period of the ancient Roman civilization, characterised by an autocratic form of government and large territorial holdings in Europe and around the Mediterranean....
(i.e., the Byzantine Empire
Byzantine Empire
The Byzantine Empire was the Eastern Roman Empire during the periods of Late Antiquity and the Middle Ages, centred on the capital of Constantinople. Known simply as the Roman Empire or Romania to its inhabitants and neighbours, the Empire was the direct continuation of the Ancient Roman State...
) for several centuries, before it was annexed by the Kingdom of the Lombards
Lombards
The Lombards , also referred to as Longobards, were a Germanic tribe of Scandinavian origin, who from 568 to 774 ruled a Kingdom in Italy...
. In 803 the Franks
Franks
The Franks were a confederation of Germanic tribes first attested in the third century AD as living north and east of the Lower Rhine River. From the third to fifth centuries some Franks raided Roman territory while other Franks joined the Roman troops in Gaul. Only the Salian Franks formed a...
incorporated Ortona into the county of Chieti
Chieti
Chieti is a city and comune in Central Italy, 200 km northeast of Rome. It is the capital of the Province of Chieti in the Abruzzo region...
. From that date on, the town remained tied to Chieti and its territory. 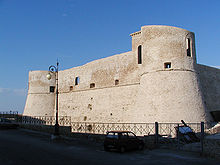 In 1258 the relics of St. Thomas were brought to Ortona from the Greek island of Chios
Chios
Chios is the fifth largest of the Greek islands, situated in the Aegean Sea, seven kilometres off the Asia Minor coast. The island is separated from Turkey by the Chios Strait. The island is noted for its strong merchant shipping community, its unique mastic gum and its medieval villages...
. In the first half of the 15th century its walls were built, and during this period Ortona fought with the nearby town of Lanciano
Lanciano
Lanciano is a town and comune in the province of Chieti, part of the Abruzzo region of central Italy. It has 36,570 inhabitants as of 2008.The city is also known for the first recorded alleged Catholic Eucharistic Miracle.-History:...
in a fierce war that ended in 1427. On June 30, 1447, ships from Venice
Venice
Venice is a city in northern Italy which is renowned for the beauty of its setting, its architecture and its artworks. It is the capital of the Veneto region...
destroyed the port of Ortona; consequently the King of Sicily at that time commissioned the construction of a Castle to dominate the renovated port. In 1582 the town was acquired by Margaret of Parma
Margaret of Parma
Margaret, Duchess of Parma , Governor of the Netherlands from 1559 to 1567 and from 1578 to 1582, was the illegitimate daughter of Charles V and Johanna Maria van der Gheynst...
, daughter of Emperor Charles V
Charles V, Holy Roman Emperor
Charles V was ruler of the Holy Roman Empire from 1519 and, as Charles I, of the Spanish Empire from 1516 until his voluntary retirement and abdication in favor of his younger brother Ferdinand I and his son Philip II in 1556.As...
and Duchess of Parma
Parma
Parma is a city in the Italian region of Emilia-Romagna famous for its ham, its cheese, its architecture and the fine countryside around it. This is the home of the University of Parma, one of the oldest universities in the world....
. In 1584 Margaret decided to build a great mansion (known as Palazzo Farnese), which was never completed due to her death.

After the establishment of the Kingdom of Italy
Italy
Italy , officially the Italian Republic languages]] under the European Charter for Regional or Minority Languages. In each of these, Italy's official name is as follows:;;;;;;;;), is a unitary parliamentary republic in South-Central Europe. To the north it borders France, Switzerland, Austria and...
in 1860, Ortona became one of the first sea resorts on the Adriatic sea
Adriatic Sea
The Adriatic Sea is a body of water separating the Italian Peninsula from the Balkan peninsula, and the system of the Apennine Mountains from that of the Dinaric Alps and adjacent ranges...
. During World War II
World War II
World War II, or the Second World War , was a global conflict lasting from 1939 to 1945, involving most of the world's nations—including all of the great powers—eventually forming two opposing military alliances: the Allies and the Axis...
, on September 9, 1943 the royal family of the House of Savoy
House of Savoy
The House of Savoy was formed in the early 11th century in the historical Savoy region. Through gradual expansion, it grew from ruling a small county in that region to eventually rule the Kingdom of Italy from 1861 until the end of World War II, king of Croatia and King of Armenia...
left Nazi
Nazi Germany
Nazi Germany , also known as the Third Reich , but officially called German Reich from 1933 to 1943 and Greater German Reich from 26 June 1943 onward, is the name commonly used to refer to the state of Germany from 1933 to 1945, when it was a totalitarian dictatorship ruled by...
occupied Italy from the port of Ortona. The defensive Gustav Line was established by the Germans at Ortona (extending towards Cassino
Cassino
Cassino is a comune in the province of Frosinone, Italy, at the southern end of the region of Lazio.Cassino is located at the foot of Monte Cairo near the confluence of the Rapido and Liri rivers...
on the opposite side of Italy). The strategic importance of Ortona within the German defences led to fierce fighting in and around the town between German and Canadian troops during the Battle of Ortona
Battle of Ortona
The Battle of Ortona was a small, yet extremely fierce, battle fought between a battalion of German Fallschirmjäger from the German 1st Parachute Division under Generalleutnant Richard Heidrich, and assaulting Canadian forces from the 1st Canadian Infantry Division under Major General Chris Vokes...
.

Ortona is home of several pleasant beaches and one historical museum based on the battle of Ortona. The Parco Nazionale d'Abruzzo is not far also.