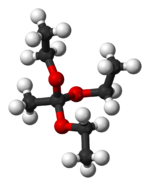 In organic chemistry
Organic chemistry
Organic chemistry is a subdiscipline within chemistry involving the scientific study of the structure, properties, composition, reactions, and preparation of carbon-based compounds, hydrocarbons, and their derivatives...
, an orthoester is a functional group
Functional group
In organic chemistry, functional groups are specific groups of atoms within molecules that are responsible for the characteristic chemical reactions of those molecules. The same functional group will undergo the same or similar chemical reaction regardless of the size of the molecule it is a part of...
containing three alkoxy group
Alkoxy group
In chemistry, the alkoxy group is an alkyl group singular bonded to oxygen thus: R—O. The range of alkoxy groups is great, the simplest being methoxy . An ethoxy group is found in the organic compound phenetol, C6H5OCH2CH3 which is also known as ethoxy benzene...
s attached to one carbon atom, i.e. with the general formula RC(OR’)3. The name can also refer to any organic compound
Organic compound
An organic compound is any member of a large class of gaseous, liquid, or solid chemical compounds whose molecules contain carbon. For historical reasons discussed below, a few types of carbon-containing compounds such as carbides, carbonates, simple oxides of carbon, and cyanides, as well as the...
that contains this functional group. An example of an orthoester is ethyl orthoacetate, CH3C(OCH2CH3)3, more correctly known as 1,1,1-triethoxyethane. Orthoesters are used in organic synthesis
Organic synthesis
Organic synthesis is a special branch of chemical synthesis and is concerned with the construction of organic compounds via organic reactions. Organic molecules can often contain a higher level of complexity compared to purely inorganic compounds, so the synthesis of organic compounds has...
as protecting group
Protecting group
A protecting group or protective group is introduced into a molecule by chemical modification of a functional group in order to obtain chemoselectivity in a subsequent chemical reaction...
s for esters. Orthoesters may be considered as products of exhaustive alkylation
Alkylation
Alkylation is the transfer of an alkyl group from one molecule to another. The alkyl group may be transferred as an alkyl carbocation, a free radical, a carbanion or a carbene . Alkylating agents are widely used in chemistry because the alkyl group is probably the most common group encountered in...
of unstable orthocarboxylic acids (the products of hydration
Hydration reaction
In organic chemistry, a hydration reaction is a chemical reaction in which a hydroxyl group and a hydrogen cation are added to the two carbon atoms bonded together in the carbon-carbon double bond which makes up an alkene functional group. The reaction usually runs in a strong acidic, aqueous...
of carboxylic acid
Carboxylic acid
Carboxylic acids are organic acids characterized by the presence of at least one carboxyl group. The general formula of a carboxylic acid is R-COOH, where R is some monovalent functional group...
s; see also acetal
Acetal
An acetal is a molecule with two single-bonded oxygen atoms attached to the same carbon atom.Traditional usages distinguish ketals from acetals...
).

Orthoesters can be prepared by the reaction of nitrile
Nitrile
A nitrile is any organic compound that has a -C≡N functional group. The prefix cyano- is used interchangeably with the term nitrile in industrial literature. Nitriles are found in many useful compounds, one example being super glue .Inorganic compounds containing the -C≡N group are not called...
s with alcohol
Alcohol
In chemistry, an alcohol is an organic compound in which the hydroxy functional group is bound to a carbon atom. In particular, this carbon center should be saturated, having single bonds to three other atoms....
s under acid catalysis:

Orthoesters are readily hydrolyzed
Hydrolysis
Hydrolysis is a chemical reaction during which molecules of water are split into hydrogen cations and hydroxide anions in the process of a chemical mechanism. It is the type of reaction that is used to break down certain polymers, especially those made by condensation polymerization...
in mild aqueous acid to form ester
Ester
Esters are chemical compounds derived by reacting an oxoacid with a hydroxyl compound such as an alcohol or phenol. Esters are usually derived from an inorganic acid or organic acid in which at least one -OH group is replaced by an -O-alkyl group, and most commonly from carboxylic acids and...
s:

For example, trimethyl orthoformate [CH(OCH3)3] may be hydrolyzed (under acidic conditions) to methyl formate
Methyl formate
Methyl formate, also called methyl methanoate, is the methyl ester of formic acid. The simplest example of an ester, it is a clear liquid with an ethereal odor, high vapor pressure, and low surface tension.-Production:...
and methanol
Methanol
Methanol, also known as methyl alcohol, wood alcohol, wood naphtha or wood spirits, is a chemical with the formula CH3OH . It is the simplest alcohol, and is a light, volatile, colorless, flammable liquid with a distinctive odor very similar to, but slightly sweeter than, ethanol...
; and may be further hydrolyzed (under alkaline conditions) to salts of formic acid
Formic acid
Formic acid is the simplest carboxylic acid. Its chemical formula is HCOOH or HCO2H. It is an important intermediate in chemical synthesis and occurs naturally, most notably in the venom of bee and ant stings. In fact, its name comes from the Latin word for ant, formica, referring to its early...
and methanol.

Both trimethylorthoacetate and triethylorthoacetate are commonly used reagents in organic chemistry
Organic chemistry
Organic chemistry is a subdiscipline within chemistry involving the scientific study of the structure, properties, composition, reactions, and preparation of carbon-based compounds, hydrocarbons, and their derivatives...
. Another example is the bicyclic OBO protecting group (4-methyl-2,6,7-trioxa-bicyclo[2.2.2]octan-1-yl) which is formed by the action of (3-methyloxetan-3-yl)methanol on activated carboxylic acids in the presence of Lewis acids and was developed by Elias James Corey
Elias James Corey
Elias James Corey is an American organic chemist. In 1990 he won the Nobel Prize in Chemistry "for his development of the theory and methodology of organic synthesis", specifically retrosynthetic analysis...
. The group is base stable and can be cleaved in two steps under mild conditions, mildly acidic hydrolysis yields the ester of tris(hydroxymethyl)ethane which is then cleaved using e.g. an aqueous carbonate solution.
The source of this article is wikipedia, the free encyclopedia.  The text of this article is licensed under the GFDL.